Screenshot this while you can. 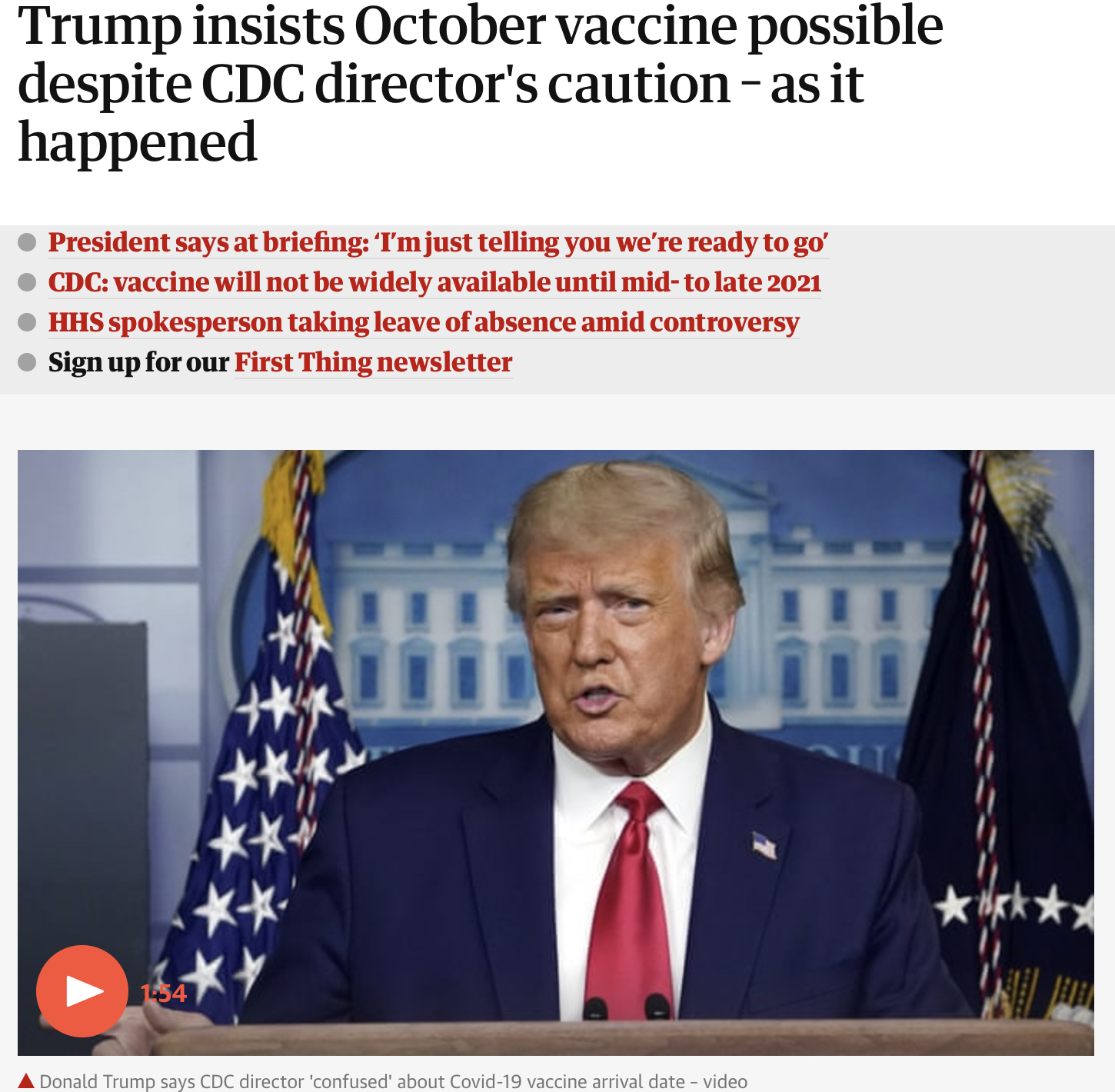 Donald Trump, continuing to contradict what Centers for Disease Control and Prevention director Robert Redfield said earlier today, just said at a press conference that “under no circumstance would [the vaccine] be as late as the doctor said.”

Redfield told a Senate panel that a vaccine will be available in November or December at the earliest for first responders, and won’t be made widely available until 2021.

Trump said that the vaccine may be ready by “mid-October”, though he did not outright say whether he believes it would be available to the general public at the time.

Trump said there was a vaccine ready to go by October? Must be a baseless accusation. Google or Twitter or somebody from Wikipedia should independently fact check this and scrub it. The sooner the better. 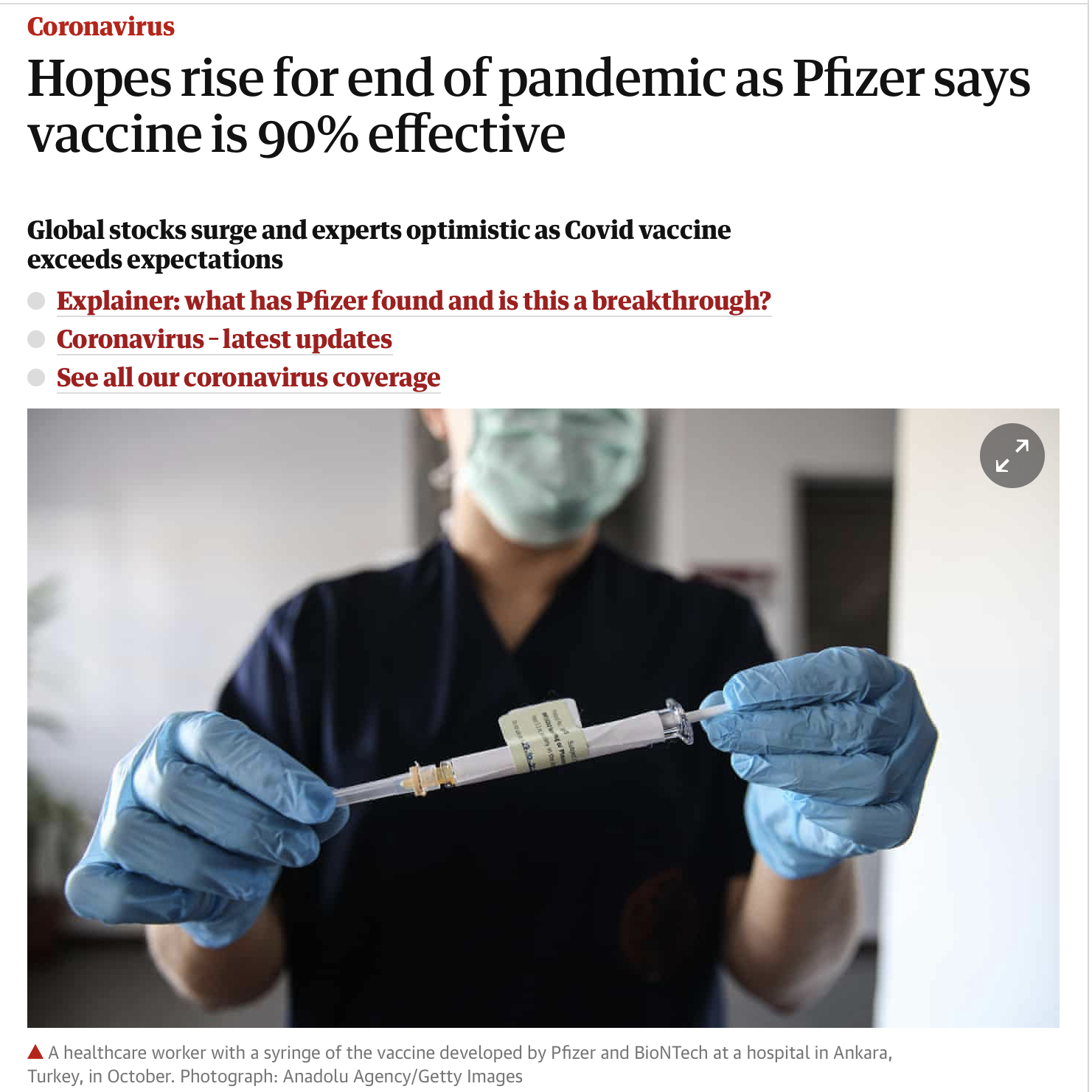 Well, this is awkward.

Hopes are soaring that a Covid vaccine is within reach, following news that an interim analysis has shown Pfizer/BioNTech’s candidate was 90% effective in protecting people from transmission of the virus in global trials.

The vaccine performed much better than most experts had hoped for, according to the companies’ analysis, and brings into view a potential end to a pandemic that has killed more than a million people, battered economies and upended daily life worldwide.

The data is from an interim analysis and the trial continues into December but the headline results were emphatic. Regulators will be looking to process an emergency licence application at record speed.

Global stocks surged to record highs on the news, while companies that have become synonymous with lockdowns in the west, including Zoom’s video conferencing and food delivery firms, saw falls in their value.

John Bell, Regius professor of medicine at Oxford University, who is involved with the Oxford vaccine, said that the Pfizer team had shown “an amazing level of efficacy” and it could mean a return to normality by spring. “I’m the first guy to say that but I will say it with some confidence,” he told the BBC.

Manufacturing is already under way. Pfizer said they expect to supply globally up to 50m vaccine doses in 2020 and up to 1.3bn doses in 2021. Countries will decide who they prioritise for vaccination. In the UK, the joint committee on vaccination and immunisation has recommended that – presuming the vaccines work well enough in elderly people – the first vaccines go to care home workers and residents, followed by anybody over 80 and other health and social care workers. After that, people are expected to get them in decreasing age order.

Remember, this is all just a coincidence.

The news comes too late to help Donald Trump’s re-election campaign in the US, but the vice-president, Mike Pence, tried to claim their administration’s Operation Warp Speed programme had helped the vaccine’s development. Pfizer denied the suggestion.

Of course they denied the suggestion. That’s just a baseless accusation.

“We were never part of the Warp Speed,” Kathrin Jansen, a senior vice-president and the head of vaccine research and development at Pfizer, said in an interview. “We have never taken any money from the US government, or from anyone.”

They even have the diversity angle covered.

BioNTech, the small biotechnology company that is the originator of the vaccine, was founded by two married German scientists, Uğur Şahin and Özlem Türeci, both born to Turkish immigrant parents, and the Austrian oncologist Christopher Huber. It originally set out to develop new types of immunotherapy for cancer, but has concentrated its capacities on the race for a Covid-19 vaccine.

This is why we need mass immigration. Women need to be able to kill their unborn babies, safe from the risk of catching coronavirus. To keep GDP growing, we can bring in immigrants to buy houses, and their genius babies can make us safe by inventing cures and doing brain surgery. Female immigrants can in turn become liberated and kill their own babies, which means we just bring in more immigrants to have the babies who will save us from the next pandemic. Everybody wins.

We must reiterate that this vaccine is perfectly safe.

There are so far no safety concerns around the vaccine, with the two companies reporting no serious side-effects. The high percentage of those protected makes it especially compelling. Regulators have previously said they would approve a vaccine that has just a 50% effectiveness rate – protecting half of those who get vaccinated.

There is absolutely no way this new vaccine is designed to reduce the world’s population to 500 million people, by means of mass sterilisation, as a key goal of The Great Reset. That is a baseless accusation and silly conspiracy theory.

The coronavirus was only necessary to undermine that pesky populist. Now that we have almost removed Donald Trump thanks to massive voter fraud, the coronavirus is obsolete.