Thousands of freedom loving Melburnians have today protested against the continued lockdown.

Speeches were made imploring respect for the universal human rights to movement and freedom of expression. 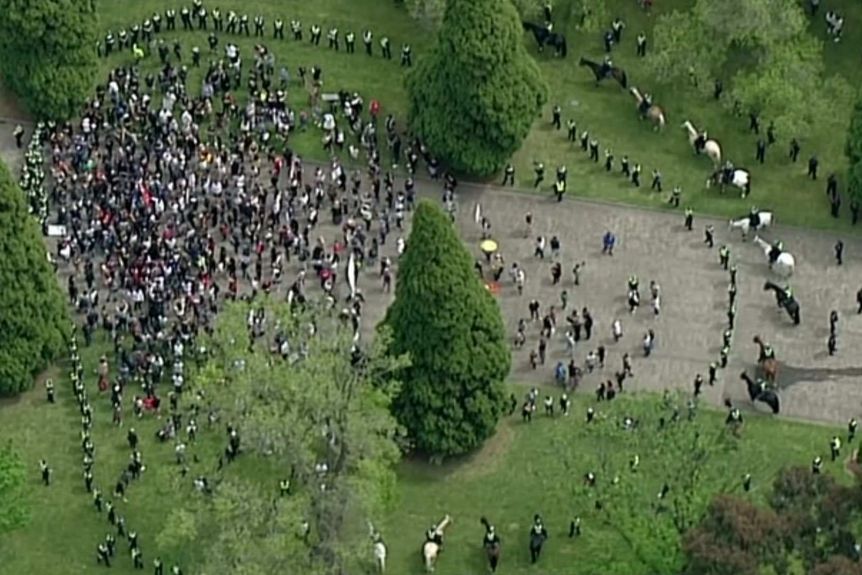 Later, he fronted the media in an attempt to save face.

Hundreds of anti-lockdown protesters blocked traffic in the Melbourne CBD on Friday with chants of “free Victoria” and “sack Daniel Andrews”.

The so-called Freedom Day began at 2pm at the Shrine of Remembrance, where protesters gathered holding placards and giving speeches before being encircled by a line of police.

A favoured tactic of the Fake News Media is to label something “so-called” which they wish to discredit without evidence.

One woman with a megaphone, who was later seen being led away by police, told the crowd “There is no such thing as COVID-19” and “There is no emergency, there is no pandemic”.

“They are collecting our DNA”, she said.

“This is a control tactic – the whole thing is a scam.”

Anti-lockdown protestors have descended on the Shrine of Remembrance. “There is no such thing as COVID-19.” @newscomauHQ pic.twitter.com/pqK5zkmR0L

New daily case numbers continue to escalate into the hundreds of thousands, yet the average number of deaths of people reported to have coronavirus has averaged about 5000 for most of the year.

Governments have shut down the world for a virus which has barely made a ripple in the world’s total death figures.

The Premier slammed protesters earlier in the day, branding the action “frankly shameful”.

Mr Andrews said it was disrespectful considering the shrine’s intended purpose of honouring those who died at war.

“The shrine is a sacred place and not only is it wrong to protest, it is not safe, it is unlawful and it is frankly shameful that anyone would seek to protest any issue at such a special place,” he said.

“Many, many people died to give people the right to protest – the least you can do, if you are determined to protest, is don’t go there.”

However, last year Daniel Andrews defiled the memory of the Anzacs when he spoke at the Shrine of Remembrance on Anzac Day. He claimed our ancestors fought for an Australia which was inclusive and tolerant, when in fact they fought for God, King and Country, for their families and for their mates.

Considering what is at stake, the Shrine of Remembrance is the perfect location for this protest.