I have avoided talking about the US Presidential election, for the most part, because I honestly do not care that much. I posted my current analysis the other day over at Gab, you can read it if you want.

The TLDR is as thus: it does not matter who wins, either way it serves Jewish interests and hurts ours.

Nonetheless, sometimes it is fun to laugh when the media get their nickers in a twist because Trump said stuff; or in this case did not say stuff. 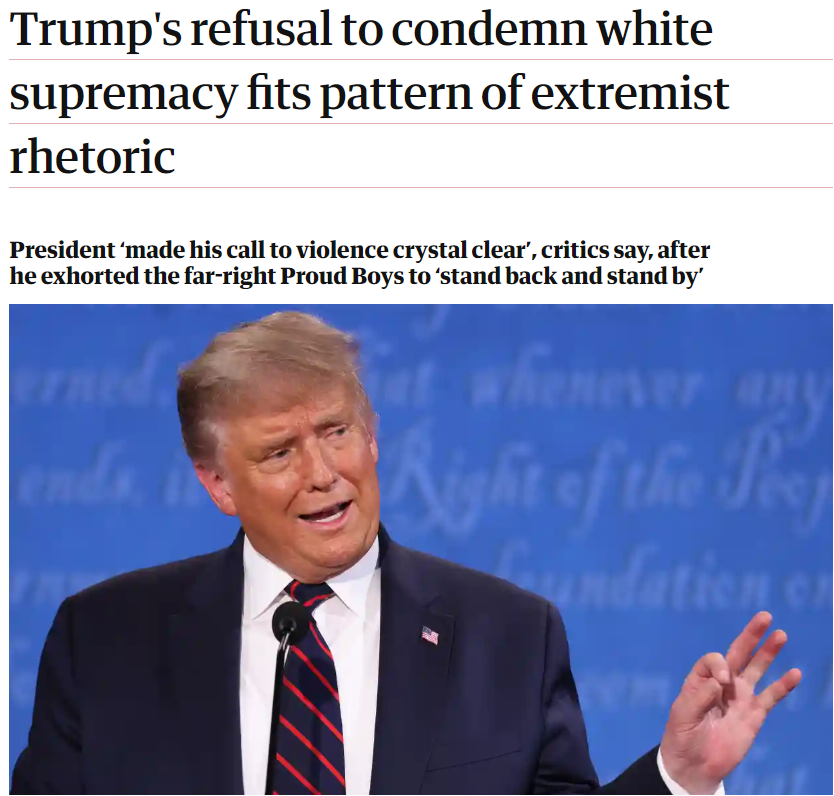 Donald Trump’s refusal to condemn white supremacy during Tuesday night’s debate fits into a pattern of extremist rhetoric that has already baselessly stoked fear of voting fraud amid the president’s urging of his supporters to descend on polling stations in November’s election.

Experts have already warned that Trump’s encouragement of people to scramble to polling stations could have horrific consequences, given that armed, rightwing, Trump-supporting militias have already brought violence and fear to cities across the country in the wake of anti-racism protests.

On Wednesday Trump claimed he had never heard of Proud Boys – the violent rightwing group that he urged to “stand by” when asked to condemn white supremacists. 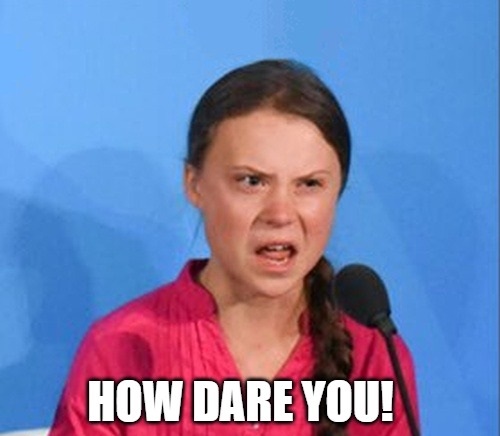 Strange that this is the media line, when at the same time black supremacists and Marxists are burning, looting and murdering across the United States.

Almost as if there is an agenda or some sort, not sure what that could be though. 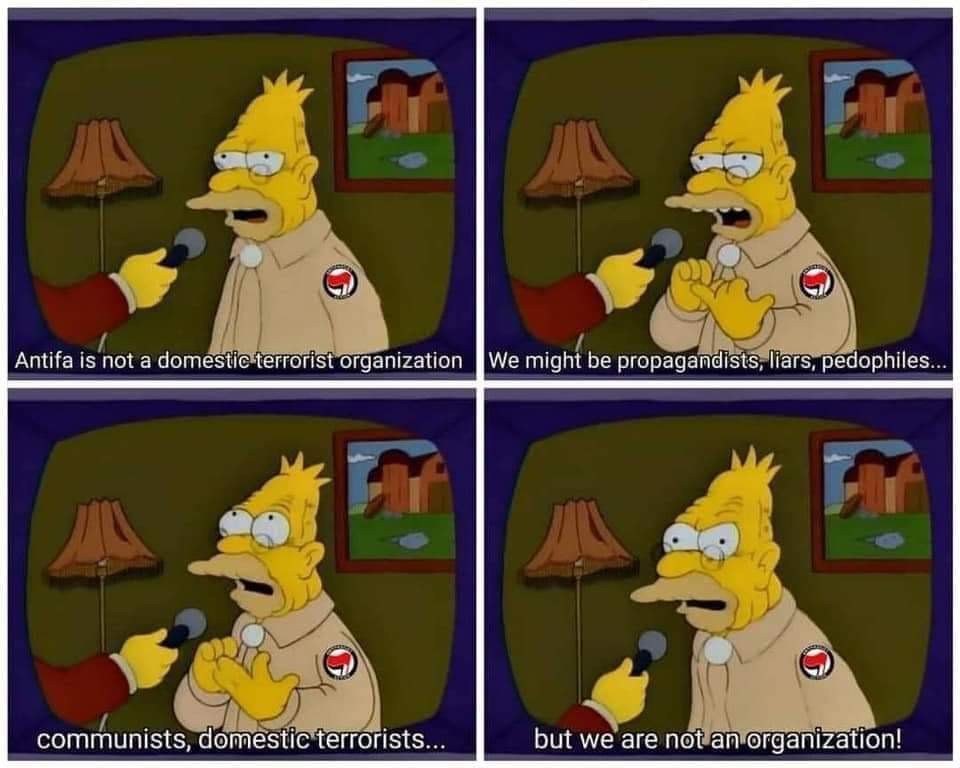 The fact that the Marxist media are calling CivNat cucks The Proud Boys “white supremacists” is a clear lesson too. There is no point giving even a single inch to these parasitic demons, go real nationalist or go home.

Fresh pictures have emerged of the moment graffiti labelling Victorian Premier Daniel Andrews a “tyrant” was removed from his electorate office in suburban Melbourne.

The words “tyrant”, “liar”, “scum”, “lackey” and “CCP” were scrawled in red on the Noble Park office overnight, with staff arriving to find the hate vandalism last Friday morning. 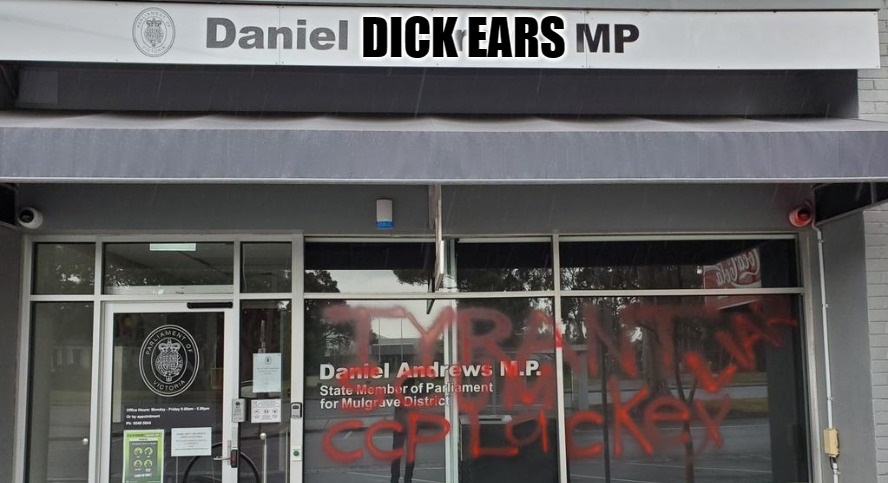 Can someone please explain why anyone is complaining about this? To me it is a big improvement; bring back honesty in politics I say.

Some might call it a crime, but this is no crime in my view, this is political activism, and resistance to tyranny. This is fighting for freedom in one of the only ways we have left since Dictator Dick Ears brutally shut down all dissent. 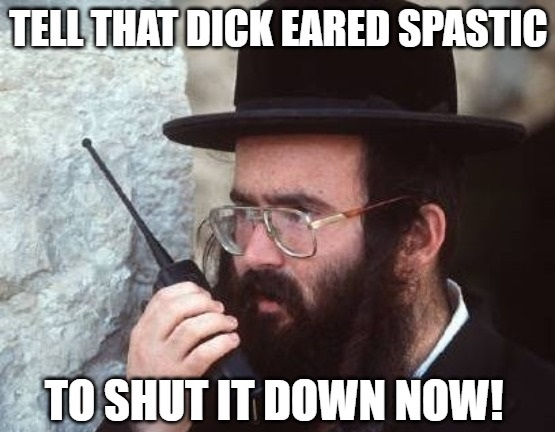 Why should I care about this when the Jewish ruling class are imprisoning whites for daring to question them? Seems hypocritical, also seems stupid.

Graffiti is the least of their worries. Soon the Aryan man will awake and those responsible for destroying our civilisation will regret their aggression.

That day they will understand how weak it was to whine about a little bit of paint on some glass. 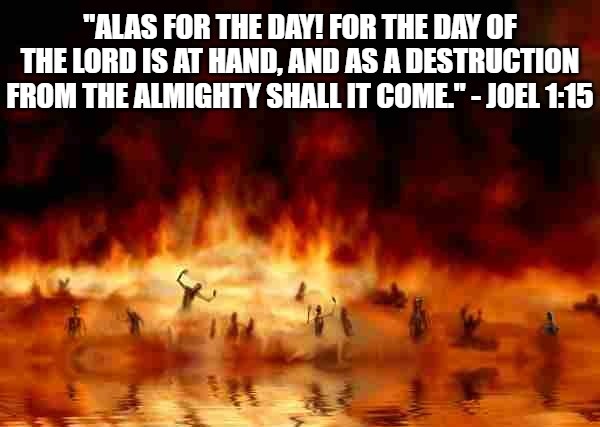