A professional climate alarmist has recanted his 30 years of misleading the world over the massive fraud that is climate change.

“I became an environmentalist at 16 when I threw a fundraiser for Rainforest Action Network. At 27 I helped save the last unprotected ancient redwoods in California. In my 30s I advocated renewables and successfully helped persuade the Obama administration to ­invest $US90bn into them. Over the past few years I helped save enough nuclear plants from being replaced by fossil fuels to prevent a sharp increase in emissions.

“But until last year, I mostly avoided speaking out against the climate scare. Partly that’s because I was embarrassed. After all, I am as guilty of alarmism as any other environmentalist. For years, I ­referred to climate change as an “existential” threat to human civilisation, and called it a “crisis”.

“But mostly I was scared. I remained quiet about the climate disinformation campaign because I was afraid of losing friends and funding.”

Sounds great, doesn’t it? Here he is debunking all of the bullshit that we have been debunking and ridiculing for, oh gee, I don’t know, a few decades now. But that’s okay, this clown has changed his tune.

Except he’s doing it by selling a book. Of course he is.

I will direct readers’ attention to a little piece that I wrote a few years ago that went somewhat viral.

Dear climate alarmists, we will never forget nor forgive.

“And you lot had the nerve to label the very few of us who stood up to this rubbish and tried to protect the very system which you so mindlessly enjoy as being climate deniers?

“You can all go fuck yourselves. We will not forget. We will remind you for the rest of our lives. We will write the histories. You will never again be able to publicly hide from your cowardice, your avarice, your gullibility, your ignorance, and your sheer stupidity. But at least you’ll still have that free market capitalist model to enjoy which you so badly wanted to throw in the recycling bin.“

Michael Shellenberger wants us to buy his book to find out all the ways that he lied and conned the public while stealing taxpayer funds to continue his parasitic lifestyle. Far from confessing himself via a book, he should be made to give penance by repaying all of the monies that he fraudulently gained. His written words mean nothing. We already know the lies; a good many good and honest people have worked tirelessly to expose them. What counts now are actions.

So pay back all of the money, Michael. And then you can do something really useful, like fuck off and die.

We will never forget, nor forgive. You are tarred.

Adam will be speaking at The XYZ Conference on Thursday July 2 between 8pm and 10pm AEST.  The Conference will stream on The XYZ YouTube Channel. Below is the direct link. 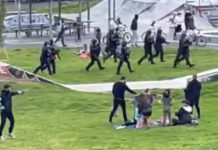