Not much surprises me these days, every week another degenerate makes the news for some degenerate reason; this is why we call it Clownworld. In the current year, up is down, left is right, good is bad, men are women, women are leaders, and Jews are victims.

God might even let the Dees win the flag this year just for a laugh. 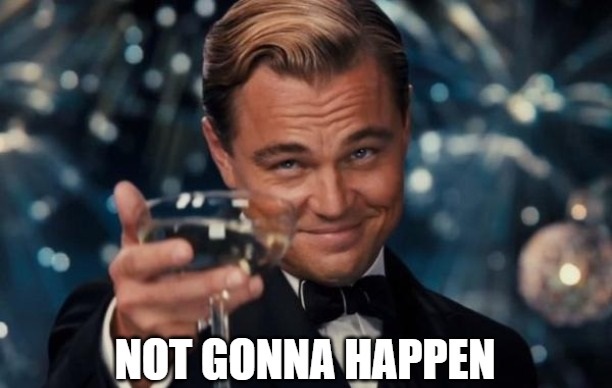 David can dare to dream!

Despite not being easily shocked anymore, some news items do pique my interest just for their sheer degeneracy, and the illuminating effect they have on our culture. Take the story of “Jolene” Dawson, a transgender “woman” who recently got some bad news and decided to vent on the BlewTube:

A transgender Gold Coast woman has been sacked from her job following an “embarrassing” YouTube meltdown over being rejected by Big Brother.

Jolene Dawson shared the 11-minute video, titled “I Didn’t Make It onto Big Brother Australia 2020 and I’m upset” to her channel last Friday – where it’s since been viewed more than 14,000 times.

In the tearful clip, Ms Dawson said her community “deserve to see a trans narrative on TV and I’m the perfect person to give that to Australia and show we’re real people”.

She argued the show should have broken the mould, accusing them of picking contestants who are “generic and ordinary” and “don’t really bring anything to the show”.

“When I was a kid I didn’t have people like me to look up to. I want to be that person for someone else so they don’t have to feel the same way I did growing up.” 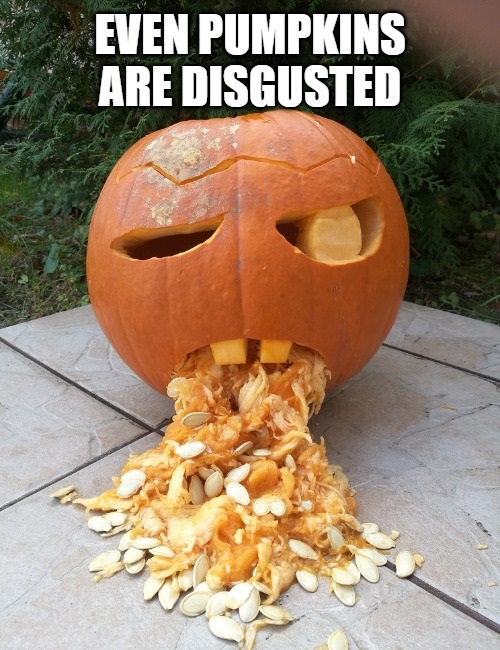 You can watch the full meltdown if you are masochistic, or just go there and leave a comment as I did, or avoid it altogether, your choice.

It does not end with his meltdown however:

Ms Dawson told the Daily Mail after the video went viral she was bombarded with abusive and transphobic comments and messages, calling her a “disgusting mutt of a f***ing thing” and telling her to “cut her wrists vertically”.

She also told the publication she’s lost her job as a result of the clip, with her former boss calling it “embarrassing” and asking her whether she wanted to have a corporate job or “be an internet meme”.

“I’m worried because with how the economy is now it’s not like I can just go and get another job,” Ms Dawson said.

Essentially this is the story: a grown man, who thinks he is a woman, tried to get on a degenerate TV show, they said no, so he cried in public, and then his boss fired him.

Sometimes God really does have a sense of humour.

Still, why does this happen at all? How have we fallen so far as a society that mentally ill sodomites (but I repeat myself) are trying to get famous by making fools of themselves on foolish reality TV shows?

Why does anyone want to go on that show at all? Were they really so starved for attention as children, or is it that they got so much attention that their adult life simply fails to live up to their expectations? 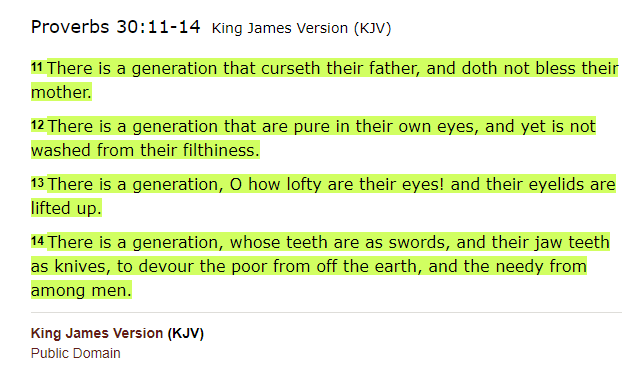 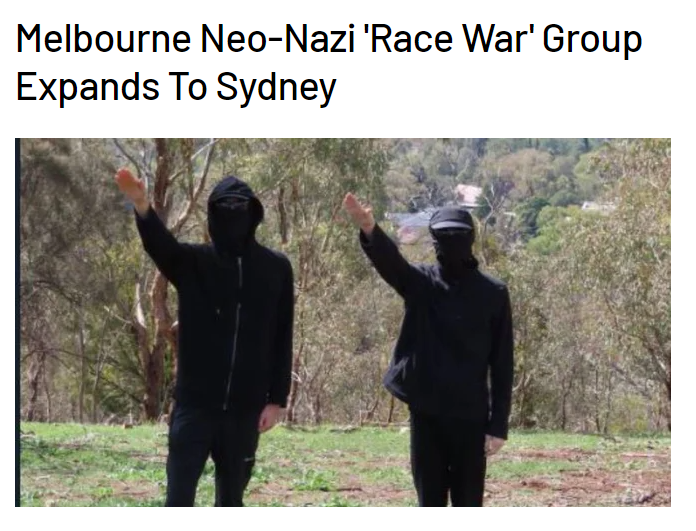 Anti-fascist activists fear a neo-Nazi group that talks of a “race war” to “take our continent back” has expanded to Sydney.

The group, which 10 daily has decided not to name, claimed on its website it is “dedicated to disseminating the National Socialist worldview among the Australian public”.

The group is small, with social media photos showing less than a dozen members, but it is understood some of the group are former members of the Lads Society — a far-right group which grew out of the United Patriots Front organisation, and briefly established clubhouses in Sydney and Melbourne.

The group does not mention the term ‘Nazi’ in its online material, but its website refers to “German National Socialism” as well as the neo-Nazi code ‘1488’. The ’14’ refers to the ’14 words’ of a neo-Nazi slogan, while the ’88’ refers to ‘H’, the eighth letter of the alphabet, ‘HH’ standing for ‘Heil Hitler’. 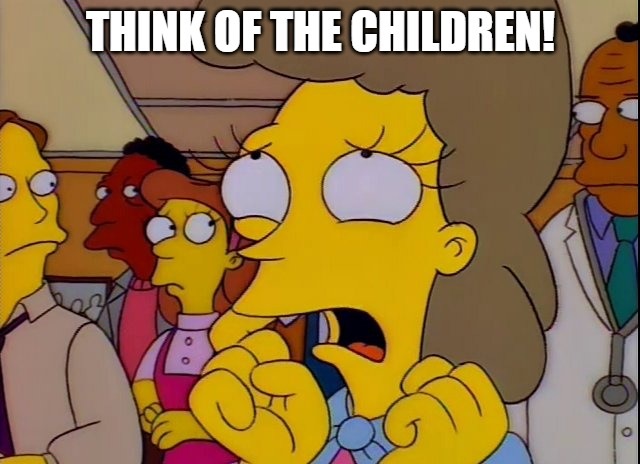 How dare they have opinions that the establishment does not like, they should all cut their balls off and start engaging in sodomy! I mean, it’s the current year!

The article in question makes sure to associate these blokes with terrorists, because otherwise there would be no point to it at all:

“In Australia, the extreme right-wing threat is real and it is growing,” Burgess said. 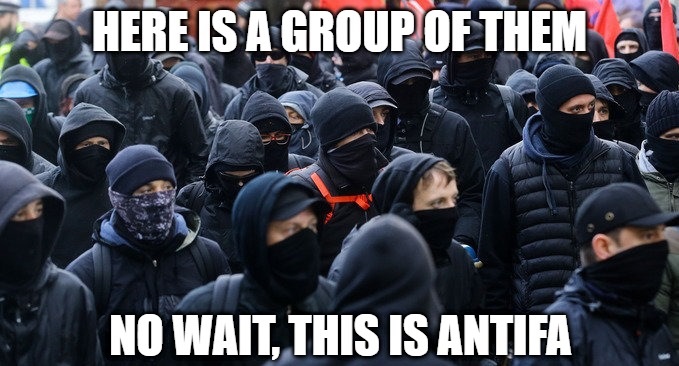 This raises all the usual questions, like why is it OK for communists to threaten violent revolution, but not OK for nationalists to have opinions?

Why is the star of Remphan, a symbol Satanism and child sacrifice, OK but the Aryan cross the worst thing in ever?

Why do we ignore the Jewish caused Holodomor, but pretend the Jew fabricated Holocaust is the worst atrocity in history?

We could go on forever, but there is no point, Clownworld is here to stay and God is mighty displeased with the world. At this point, who could fault him for flattening everything? It is what he said he would do after all.

Enjoy civilisation while it lasts. 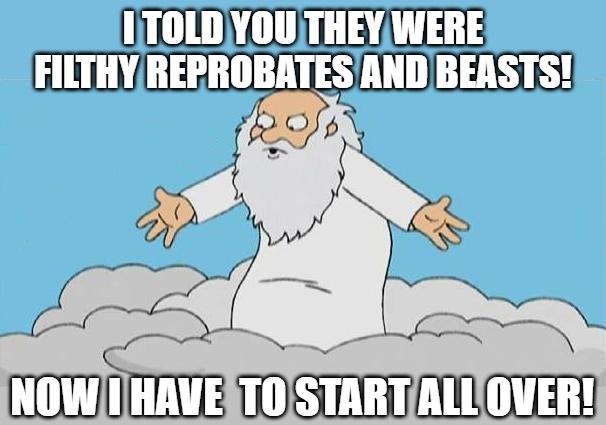