Editor: In the coming days we will publish a variety of articles and videos which discuss Propertarianism, some for, some against. We begin with a critique by Mike Rusade.

Vox Day demonstrates I’m correct: 1)Xians are cowards waiting for someone else do to the work; show up after, say an everyone-gets-a-prize, and claim victory for their semitic god of hate. 2) Right Online is gossip-whoring for chump change from the gullible for feels and failure.

The name Curt Doolittle has a few interesting properties. Firstly, nobody’s heard of it, and secondly, it’s so very close to being an apt description of the man who owns it: The first part is almost an unprintable curse word, and the second part almost says “do nothing”. Because Curt Doolittle, primary author of the Propertarian thought-experiment currently doing the rounds amongst nationalists and the broader dissident right, has done precisely that – nothing. “Do little” is an either overstatement of his accomplishments or a description of his life philosophy. A glance at the man’s website will reveal that he’s been at this for years, honing and tweaking his boutique theory-crafting experiment in the ever-expanding genre, How To Save The West With This One Weird Trick. It’s not a new one, and has been around since probably the late 1800s, but it got a big boost recently with more people recognising the accelerating madness we currently find ourselves in. 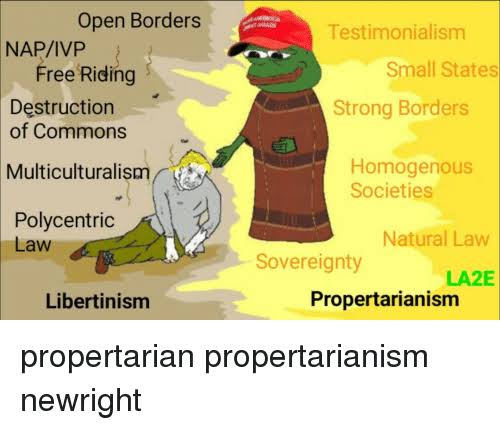 Take a glance, if you’ve got a few hours spare, and look into Propertarianism as explained on the website. It’s a rare treat to see so many words say so little. One marvels at the futility of the whole effort: after years of development, is that it? Is that what all the fuss is about? Propertarianism is one of “those” ideologies that tries to harden every point it makes so as not to be misconstrued. It is designed to be insulated against legalistic policy autists who will try to find cracks in its propositions and use those to take it apart, because it was written by the same. Thankfully for us, this grandiose mansion was built on sand, so all we need to do is point out the shifty foundations and good people will abandon it.

The primary element that summarises propertarianism’s weakness is this: Ideologies do not motivate men. Alexander the Great did not write tomes on how he was going to save Greece from Persia for good, he just went and did it. Ideologies motivate bureaucracies, and those are staffed by weaklings and coddling school-marms. Want a swamp? Write an ideological treatise and give it to some bitter men that society has rejected. Look at how the left has gained power – it took decades of whining and tut-tutting by low testosterone genetic waste, all powered by someone else’s ideological system that they picked up and ran with. Men don’t do well with someone standing over them pronouncing rules that they must live by, worse yet when those rules are constantly revised and updated, and those who make a habit of consulting rules are in reality avoiding personal responsibility. Just following orders, and all that.

It’s often said that it’s easy to criticise, and hard to offer a viable alternative. Luckily, we don’t need to come up with something original, because the Son of God (or even just a very smart man if you doubt his authenticity) laid out two great rules to run your life by:

There it is in two short sentences. What more needs to be added? In Doolittle’s above-quoted tweet, he makes the claim that Christians (he conspicuously replaces Christ with an X, don’t say that’s Twitter format limiting him, there are other ways of being succinct that he avoided) worship a “semitic god of hate” yet demonstrates that he seems to be very unfamiliar with Christ’s teachings, or much of the Bible at all.

His ideas are easily dismantled: First, the idea of God as a semitic cultural artefact is laughable as all Indo-European (“Aryan” as Doolittle likes saying) religions have a central creator-father-god. In northern Europe his name was Tyr (later supplanted by Odin), in Rome he was called Iove Pater (Jupiter to us English speakers), in Greece Zeus, etc. One can argue about the deific status of the minor gods in these pantheons but the main point here remains, namely that no Christian worships a Semitic god, they worship the One God that all have seen glimpses of. Further, what hate does God espouse? Hate for sin, which we should certainly all share, but one would be hard pressed find “hate” in the Sermon on the Mount. Again, what hate? The only person who should call righteous wrath against immorality “hate” is someone with something to hide, or a person who takes pride in their degeneracy and doesn’t want accountability to something greater than themselves. This would be an ironic stance for someone who claims to be the author and purveyor of the sole manifesto that will save the West. Imagine throwing in your lot with Doolittle and having him balance the fate of your people on a bunch of rules he made up. The verbosity of Propertarianism is a challenge to the simple truth that Westerners have a right to exist by the mere fact of our existence. There is no greater responsibility than that, and no amount of legalese will change that.

The more glaring issue in Doolittle’s ideology, which he sums up in his tweet, is that Christians are cowards who wait for someone else to do all the work, then show up and claim part of the victory. That is to say Charles Martel, who with a couple of Christian mates turned back the Islamic invaders of Europe, was a coward who waited for a true Aryan Warrior like Curt Doolittle to show up and write a book about it. Now some may do extreme mental calculus to claim that Charles Martel was actually a pagan or was acting in a stereotypically European manner rather than a Christian manner, but that just highlights the beauty of Christianity as a lacquer that hardens over an existing culture and preserves it, as opposed to something like Islam that will totally flatten the cultures it comes into contact with. More than that though, for Christianity has fostered the European peoples’ flourishing into the mightiest civilisation to date. Perhaps Doolittle has a case in attacking the false god of Islam, but it’s much less risky to attack Christians these days, as it’s the globohomo order of the day to dismantle Western civilisation, of which Christianity is an intrinsic part. Beware of those who call themselves friends while doing your enemies’ bidding. That’s right, Cavernous Cranium Curt has gone to great lengths to replace the couple-dozen words of Matthew 22:37 & 39 with many thousands, just so he can explain away the very essence of what made the West the thing he wants to preserve. The second part of Doolittle’s tweet barely warrants mention, as it’s simply him trying to preclude any criticism as mere “gossip-whoring” by adding in a clause that does the work in defending him so that he doesn’t have to claim responsibility for his words. Legalistic policy autist.

Propertarianism is a mess of unnecessary clauses that any right-minded person already knows. Curt Doolittle is an ideologue and a grifter, no different from all the others who have come and gone from the dissident right. His system will never cover all the loopholes, because pretty much every ideological system has at some point made that same claim and come up short. This in turn is because ideologies are not intangible, inviolable laws that suffuse out of the aether, rather they are the product of flawed humans, and they inherit our flaws. If a propertarian state is ever established, which at this point is highly unlikely, someone will come along in 200 years, question some of the language, and find a way to subvert it.

If propertarianism is really about defending natural law, then just state natural law. You have a right to exist, Western man. No need for ideologues to proclaim rules over you. Now get on with being a man.

Want to sit around and give somebody money and attention? Give it to Simon Roche and the Suidlanders, who are running an active Civil Defense organisation and you’ll help save real lives. Give it to Stefan Molyneux, who runs a well-established platform disseminating important information and in-depth research, and you’ll learn something along the way. Better yet, pick up a copy of the Iliad from a second-hand bookstore, buy a gym membership, and flex on the haters – it’s better than pouring hot coals on their heads. You won’t earn respect from the likes of Curt Doolittle, but trust me, that’s a good thing. Doolittle points to his word-salad ideology so that he can absolve himself of responsibility; he is a coward owing to his complete lack of gravitas or virtue.

In summary, I’ll be succinct. First, only you can save the West. Second, only God can save you. Curt Doolittle was apparently a software engineer. As an engineer, he should know that building something enormous and complicated invites multiple points of failure, and he will spend the rest of his days tuning and patching his inhuman monstrosity. Let the rest of us live by a much simpler philosophy that isn’t concerned with justifying itself to those who hate us.

Let me end with a disclaimer. I am a Christian, and far from doing nothing, I have proudly contributed to the end of this charlatan’s career. Now excuse me, I’m sore from doing deadlifts, and I have work to do.