Three years we’ve been waiting for Brexit, like kids standing outside a sweet shop while mum is already 50 meters down the sodding road and showing a severe disinclination to turn back, her purse tightly tucked under her flabby arm. Three years of watching while our elected representatives did absolutely everything in their power to not represent us. May was elected to the role of prime minister with a single mandate from her fellow politicians who put her there – delay Brexit and if possible, kill it dead. She almost succeeded.

But now we have Boris. His messy blonde shag pile and idiotic Cheshire cat grin disarm his opponents into underestimating him, but do not be fooled; he is intent on becoming an historic leader and foremost in his plans is his desire to deliver on Brexit. He has wasted no time either, with a fresh cabinet that was sitting in place and discussing matters of great importance while the seats were still warm from the dispatched bottoms of the previous time wasters and oratorical fornicators.

I like Boris. He has the masculine look of friendship; of someone who would have your back in a brawl. He is smart, generous and confident. Most importantly, he shows a good lack of fear. I think that he will prove adroit at both getting us into and out of trouble. Right now we’re firmly in the poo so he is the man for the moment.

Brexit is of course an absolute necessity. The diseased gnomes in Brussels are still screaming for money from the UK, but their game is up and some of them may even know it. It is simply extraordinary that this shitty little country continues to act the way that it does. Belgium is a useless excuse for a nation; it should be equally divided up between the French and the Dutch and never spoken of again. The fact that we twice went to war for the miserable ungrateful sods is beyond reproach, and just goes to show that the weak are weak for a reason and should be ignored as such. Let the Belgium nuns be raped and pillaged by the horrible Huns, I say. We’ve been paying for that claptrap ever since.

To give you an idea of just how much of a scam the EU really is, take a look at this image courtesy of Catallaxy Files. 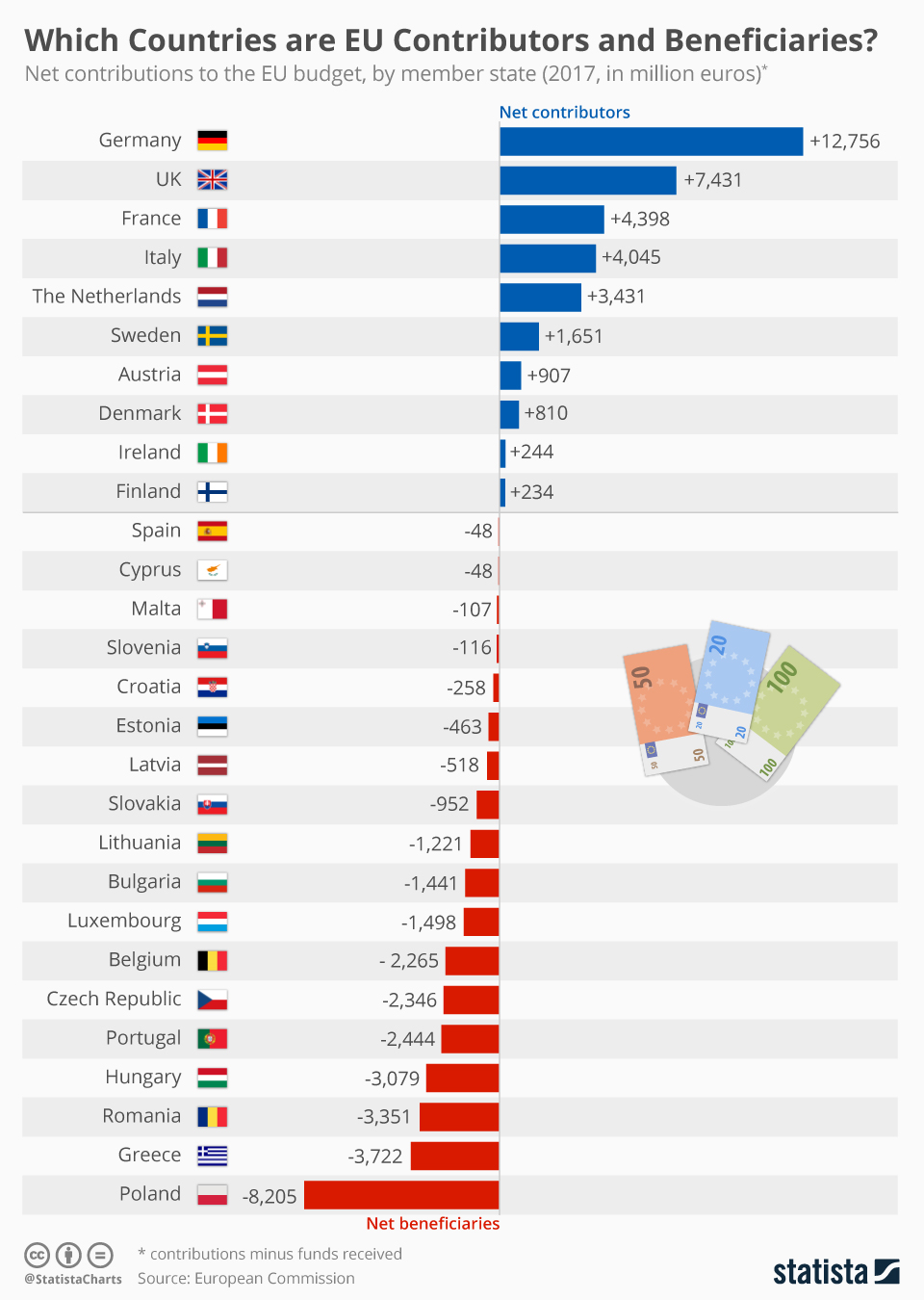 There sits Belgium down near the bottom, a festering leach on the backside of Western Europe while it enjoys its only time in the political sun which is hopefully soon to go the way of a black hole. But there are some other surprises in the graph which give additional weight as to why Brexit is the only way forward.

Take Luxembourg, one of the smallest states in Europe with a population of only 600,000. Yet it has the 2nd highest GDP in the world at $114,825. The UK comes in at 26th on that list which beggars the question, just who should be subsidizing who here? This is the great fraud of the EU. But don’t be all on Germany’s side; they wanted the EU more than anything because it devalued the Deutsche Mark and as a result they have made a subsequent fortune on export manufacturing.

One more surprising takeaway from the list is Italy. I had assumed that Italy was in the red, particularly due to their inclusion in the derogative PIGS label of countries who were supposedly a net drain on the EU, (Portugal – Italy – Greece – Spain). Well, it turns out that was wrong by a factor of one. Perhaps it should instead be labeled PLBSG as Belgium and Luxembourg definitely belong in that club. May as well throw in another P for the good for nothing Poles while we’re at it.

Boris is going to act by October 31st, so happy Halloween everyone. We’ll see soon afterwards who is really waking up to the nightmare.