The ABC continues to do the work lazy nationalists who would rather play piano; find all our friends. Now with one easy DuckDuckGo search, I know the names of all the people I would like to personally shake by the hand.

Leaked messages have revealed the Australian alt-right’s secret plan to use Queensland senator Fraser Anning to expand its extreme agenda in the Australian Parliament and beyond.

The texts, seen by Background Briefing, offer a rare insight into the strategy the movement intends to use to further its goals and spread its ideology.

Members of the group are seen discussing plans for confrontational racist stunts to be performed during the current federal election campaign.

The proposed stunts, designed to attract global attention and help Senator Anning get re-elected, include performing in “blackface and other taboos” and “burning the Quran”.

Another stated goal is “obtaining and accessing a giant email and SMS database” in order to send messages that are “extremely right-wing”.

So you’re saying that a bunch of redpilled guys have gotten together and brainstormed a way to bait the globalist media into giving Fraser Anning national and global exposure.

The lying media generally ignore sensible conservatives and nationalists in order to push the narrative that “the centre” lies somewhere between Tanya Plibersek and Sarah Hanson-Young, and that someone as mild as Peter Dutton is on the so-called “far-right” fringe. In this manner the political-media complex attempts to marginalise the majority of real Australians and leave millions of people without a voice in Canberra.

The legacy media’s fatal flaw is that its adherents genuinely believe that anybody to the right of Malcolm Turnbull is a so-called “nazi” (sic), a “fascist”, deplorable, you name it. The MSM NPC’s are hardwired in Clown World to dogpile on anybody who commits wrongspeak.

Until a few years ago, normal people who opened their mouths would back down at the first hint of being labelled a bigot. Then God Emperor Trump showed us the way, and now patriots the West over are falling over themselves to never apologise, always escalate.

Which leads us back to Fraser Anning. The ABC have basically uncovered what most Aussies had kinda guessed anyway. A bunch of /ourguys/ had figured out a way to bait the mainstream media into giving /ourguy/ round the clock coverage to a national audience:

The strategy is foolproof. NPC’s are not AI. They are literally incapable of learning from new information acquired. They must follow their programming. 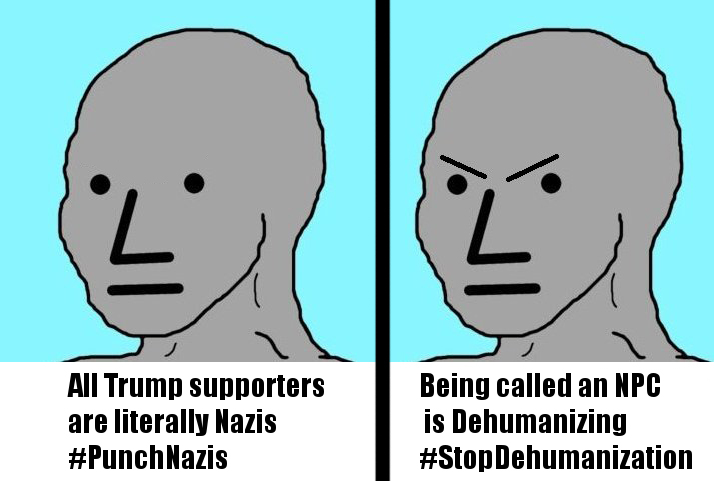 So if you want to know who to thank, read the article. 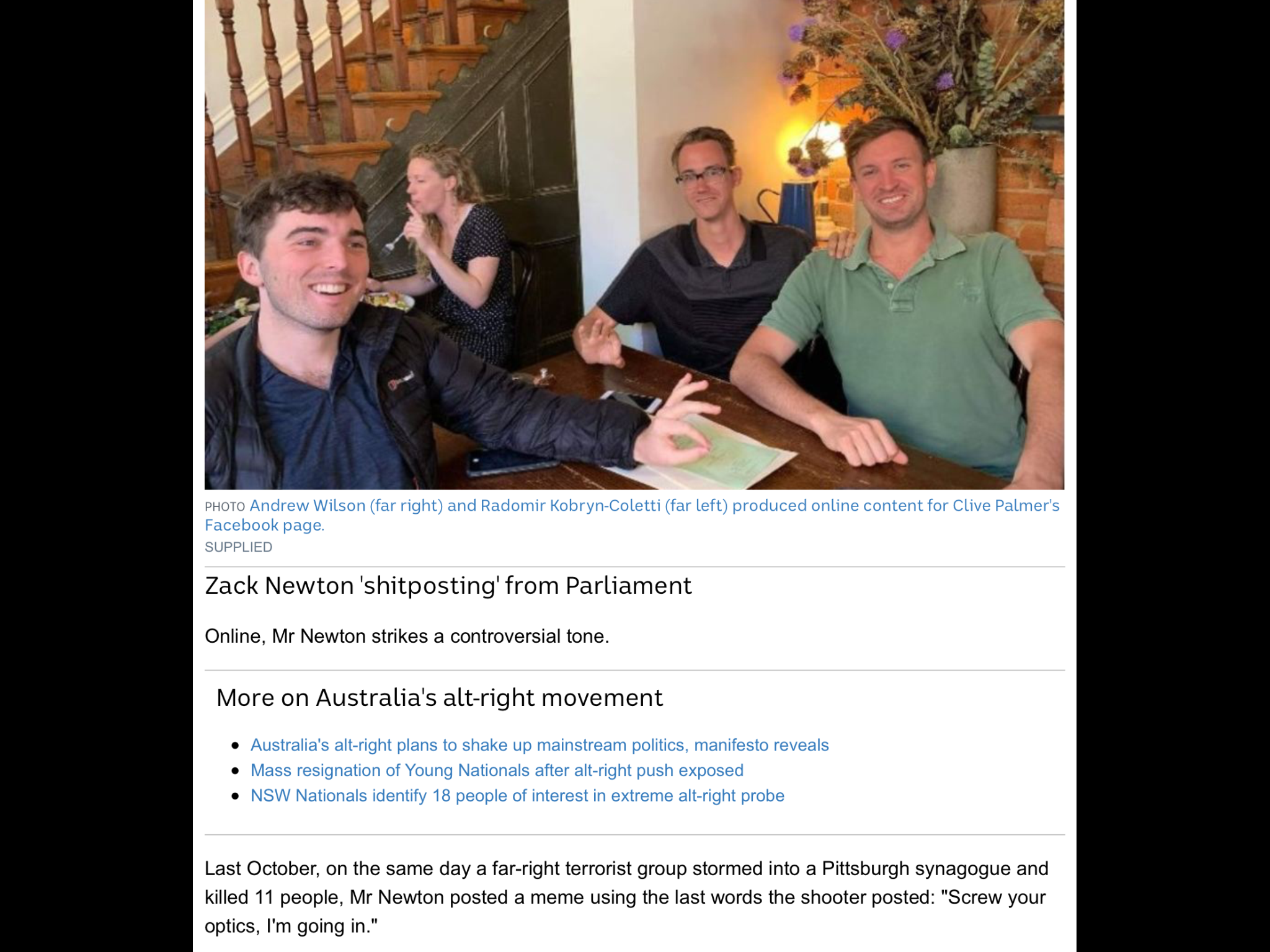 The first is a blatant falsehood:

Last October, on the same day a far-right terrorist group stormed into a Pittsburgh synagogue and killed 11 people, Mr Newton posted a meme using the last words the shooter posted: “Screw your optics, I’m going in.”

So a lone wolf who has nothing to do with white supremacy now constitutes an entire “far-right terrorist group”. Got it.

Secondly, Alex Mannlet happily names plenty of ordinary Aussies, but fails to mention Morgan Munro, pictured in the centre. That is because Morgan is a member of the Unshackled, a key player in the “burgeoning alt-right media scene” to which Mann later refers.

We are cogs in the wheel of an emerging alternative media juggernaut in Australia which is smashing the globalist narrative, and every time the dying media tries to attack us, we grow.

Finally, Mannlet has doxxed himself as a Slackbastard operative:

“Andy Fleming, who researches fascism, said the fact Mr Newton and Mr Kobryn-Coletti are employed by Senator Anning is proof of a concrete connection between his office and the alt-right.” 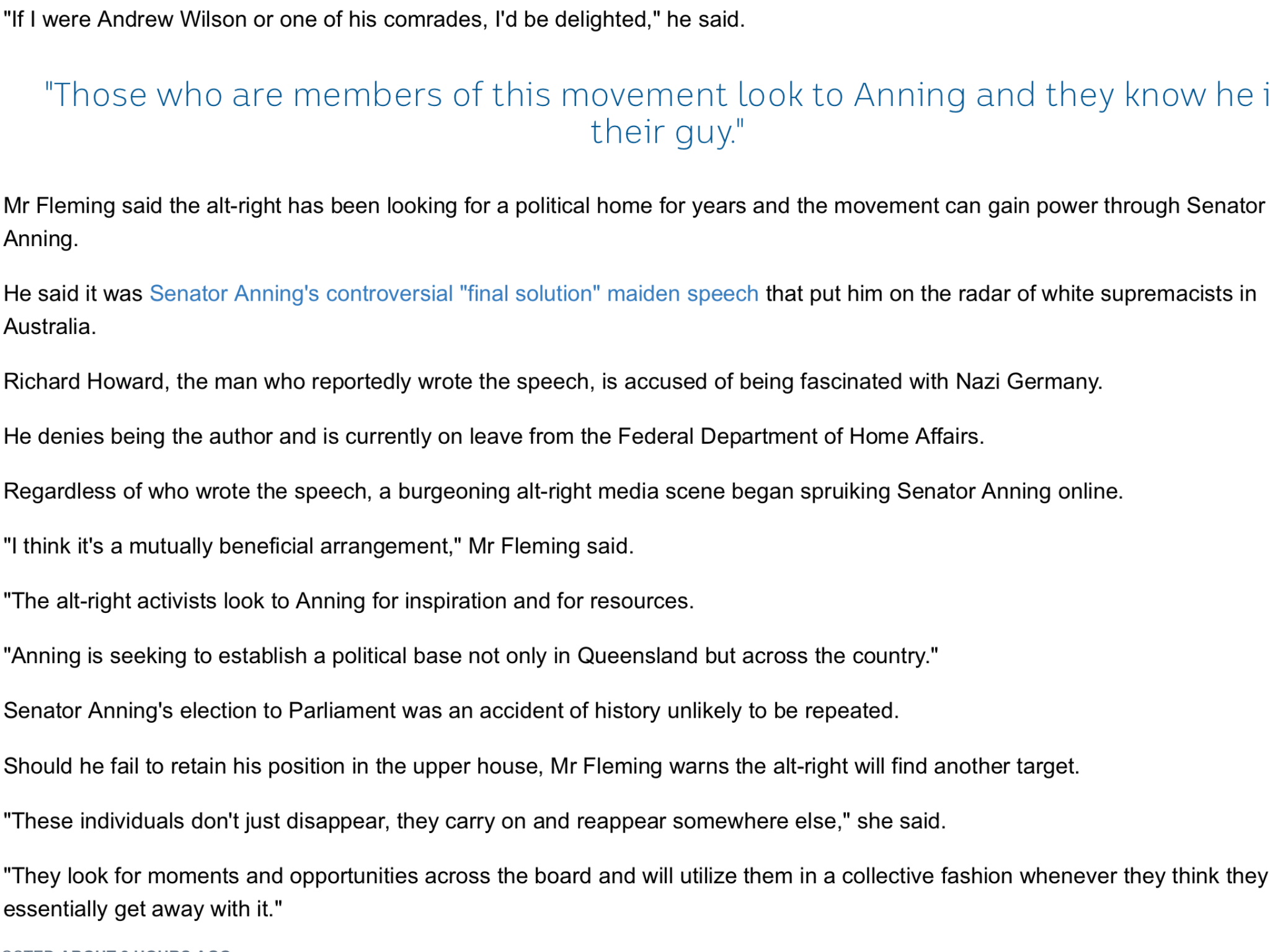