“The government’s hopes of steering legislation through the senate in the final sitting weeks of the year face a further challenge, after Queensland senator Fraser Anning threatened to vote against government bills after his White Australia plebiscite was once again sunk.

“Although there is little on the government’s agenda that is controversial, the government has listed several superannuation reforms for debate this week, which were first announced last year and in May’s federal budget.”

Whatever. Few of you will ever get your hands on your super. You think a heavily indebted government, desperate to pay interest on its latest infrastructure-for-Sudanese-brain-surgeon-loans, is going to leave a big pile of money just lying around? 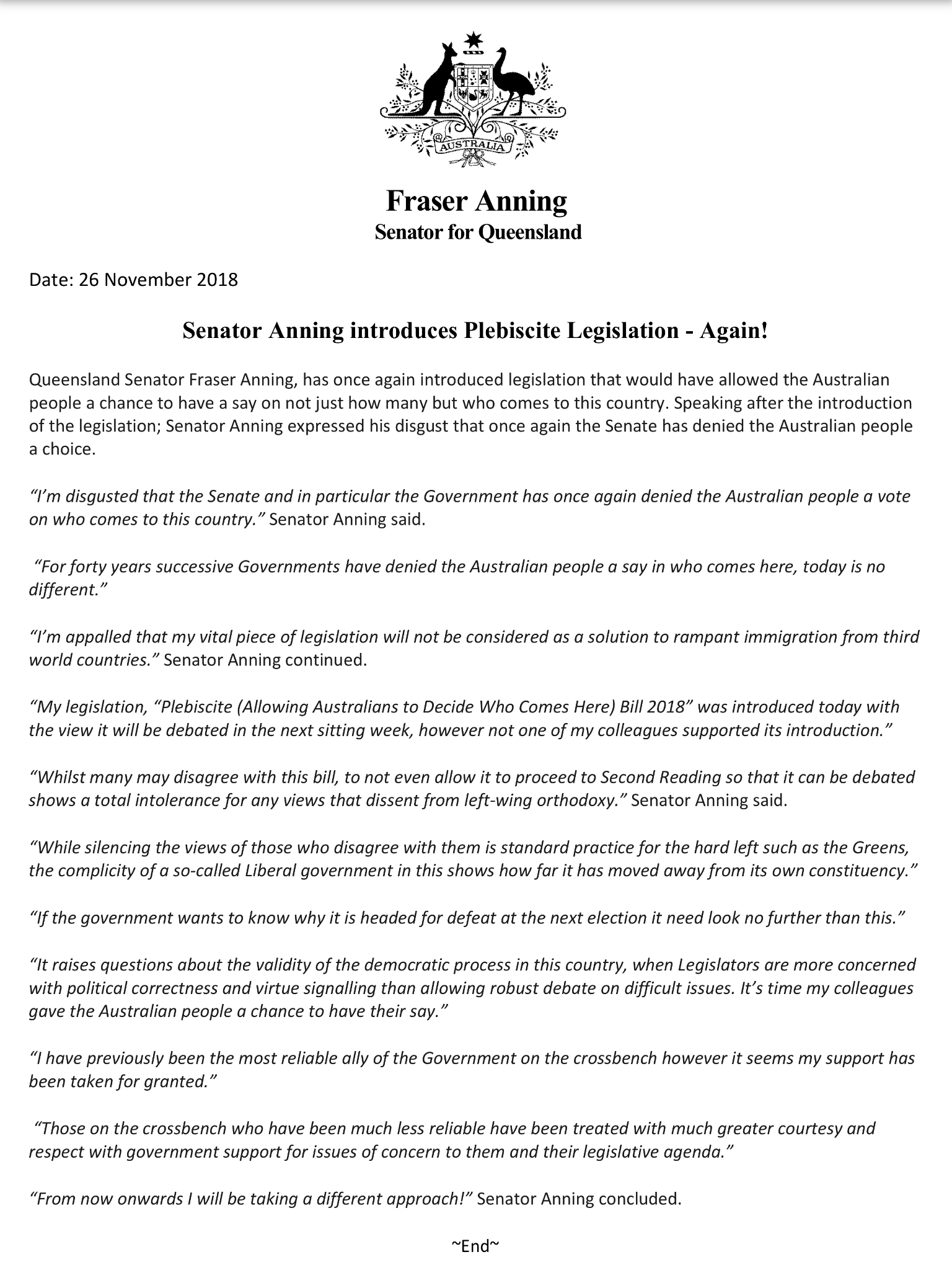 As stated, this is awesome. The XYZ is now basically directing events inside the Federal Parliament. From October 19, 2018:

“But they can’t keep us out of Canberra forever. The shenanigans this week in the Australian parliament are just the beginning. They represent an historic moment, when white Australia reminded its rulers that we still live and we demand that our voice be heard.

“Canberra has barely had a glimpse of the Overton Window. To the patriots still left in Canberra I say double down, escalate, increase the volume, and reintroduce this Bill every week until they relent.”

But here is the biggest reason that this is awesome:

“Mr Anning had attempted to list his immigration bill for debate over the next two sitting weeks, but was prevented from doing so after the senate blocked the introduction of the bill.

“In October, the government, Labor, Greens and some of the crossbench took the unusual step of refusing a first reading of Mr Anning’s proposed plebiscite on ending non-white immigration to Australia.”

“Some of that crossbench” includes Pauline Hanson. Twice. The Pauline Hanson who has repeatedly called for a ban on Muslim immigration.

In light of the most recent radical Islamic inspired terror attack in Australia, I asked the Government when will they stop migration from known extremists countries?

Their answer was possibly the weakest, most gutless answer you could ever imagine. -PH#SenateQT #auspol pic.twitter.com/igmHW6VKEH

Thus the famously anti-immigration parliamentarian who has compared Islam to a disease won’t touch a bill aiming to give Australians a say on whether or not we should restrict non-European immigration.

Do you know what this means?

Calling for the banning of Islam in Australia is now middle of the road. It is mainstream. Moderate. Sensible. Normal. It’s Okay to want to ban Islam.

The latest Newspoll has One Nation at around 8%:

The Overton Window has moved a long way in the few short years The XYZ has been running, and it will only move further right.