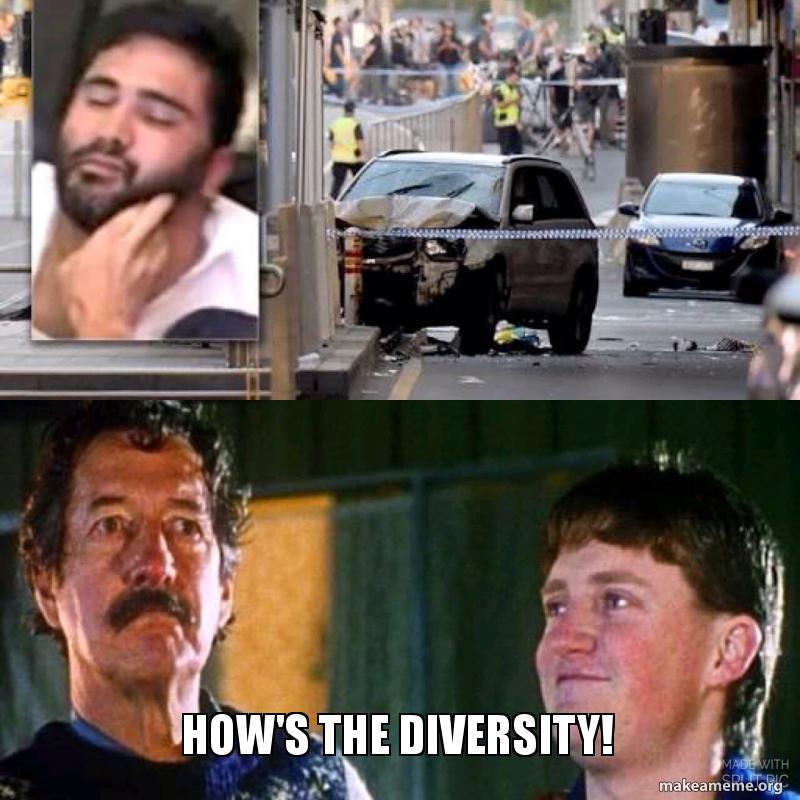 Originally published January 3 2018. At the start of this year Sam Vimes put together an excellent series on Cultural Marxism and its various strands. This part 2 covers the ideology of Multiculturalism, and asks the important question – Why the hell does Australia even need to be multicultural?

In Part 1 I posed the question of why the Australian government is myopically placing the ideological needs of a very small minority ahead of those of the majority, referencing the LGBT movement in this country, and the quest for the introduction of radical gender theory. I’d like to expand on that a little and ask a series of related questions:

Why the hell is everything today dominated by “Social Justice” – Gender, Race, “minorities”, multiculturalism and “Equity”? Why is the media, academia, and government obsessed with identity politics? Why am I attending Cultural Diversity training in the workplace every 6 months? Why does it feel like every decision made in this country is dominated by a discussion of “diversity”- whether it be terrorism and Islam, immigration and Manus Island, Same Sex Marriage – even local government elections are frequently framed around the phrases “appealing to the ethnic vote” as in the case of Bennelong, where the influence of the Chinese vote seemed to be key for Labour’s chances of winning. And most importantly, why must ‘Star Wars – The Last Jedi’ be a 2-hour lecture on feminism, toxic masculinity and the dismantling of the patriarchy?

As someone who up until 2 years ago was a blissfully ignorant liberal, these questions had always, in my mind, been a fait accompli, a necessary discussion in an unjust world, where it seemed that there was a pressing need for Australia to BE multicultural, or to put another way, Australia should strive to be more multicultural. After all, Australia is a nation of immigrants, isn’t it? What I’d seen on TV and read in newspapers and magazines was that not being multicultural was somehow anathema to progress, as if Australia’s white-European heritage was fundamentally flawed. But I realised no one could explain to me exactly why this needed to be the case.

In Australia we have a Greens Party under Richard Di Natale (and its cadres on the socialist left) that advocates openly for a new diversity charter – citing the country’s “growing divisive and hateful rhetoric” as rationale – and pushes for a Code of Multicultural Ethics, as well as for a Code of Conduct for broadcasters that would introduce culturally and linguistically diverse individuals within all public broadcasters. Similarly, they wish to see the education system repackaged yet again to introduce an intercultural curriculum. Forget mathematics and literacy, let’s focus on fluffy subjects like inclusivity.

The question that those who push hardest for multiculturalism never seem to provide a cogent answer to however, is:

If the culture which is attracting a vast number of immigrants to it is so racist, unjust and in need of urgent change, why then do they come?

What possible motive would immigrants from the Third World in particular have to turn their lives upside down, and risk being confronted by hordes of racist, bigoted white Australians? As we all know, therein lies the rub, and the massive lie that the Greens and the lefty media in this country cannot own up to – that this country has a generous, open and welcoming culture, which although not perfect, is considerably better than that of whichever Third World utopia the immigrants have arrived from.

Another question I personally have is:

When and why did it become so critical for Western countries to embrace multiculturalism so earnestly, when I hardly see calls for a reciprocal multicultural Turkey, Iran, Japan, Chad or Vietnam?

Where are the calls for western immigrants to make up quotas in these countries, to enrich their social fabric? Can I demand the UN instruct Iran take in an extra 10,000 Aussie migrants next year?

But where it really gets interesting is when one looks at the official statistics from the Department of Immigration. As of June 2016, by country of origin, the vast number of immigrants living in this country today were born in either the UK, New Zealand, China, India, South Africa, Malaysia, the EU, Vietnam, Greece, USA and the Philippines – totalling some 18% of the total Australian population, or 4.5 million people. Most of these immigrants have seemingly gotten ahead quite nicely without requiring special intercultural curricula in the schools or special attention in the public sphere, and have by and large embraced Australian life without too much fuss. Compared to these numbers, the number of immigrants annually from majority Muslim countries – Pakistan for example – seems relatively low, numbering in the thousands in 2016. Statistics indicate approximately 600,000 Muslims in the country total (2.4%), but upwards of 40% are Australian-born. Similarly, it’s difficult to get concrete numbers, but as of the 2015 census around 100,000 African migrants (excluding white South Africans) called Australia home (0.4% of the population).

Australia is already extremely diverse. Some 6.9 million residents and citizens (28.5%) were born overseas in total.

So we get to the point – given Australia has opened its doors in welcome to several million people from very diverse national, ethnic and religious backgrounds over the past 70-80 years, what exactly is it about our culture today that requires the Greens and their allies on the Left to advocate so strenuously for even more multiculturalism, when surely we would already call ourselves a multi-ethnic nation, and one which our leaders should openly be promoting as uniquely Australian, within which all of our fellow Australians from whichever foreign background should be participating in as Australian? Surely the only culture we should be openly celebrating in our schools is our Australian culture, you know, one which seeks to provide a unifying set of cultural values (such as inclusivity and tolerance of the individual), to immigrants from diverse ethnic backgrounds, especially those fleeing from countries that fundamentally oppose our unique way of life?

What this tells me is that this insidious agenda of the Greens and the rest of the left in this country, to spruik multiculturalism, diversity and “inclusivity” is in fact the exact opposite – it is an open assault on Australia, its culture and its people (including those immigrants who have embraced their adopted country and assimilated), to be used as a sledgehammer to knock down whatever our shared Australian culture is, and replace it with a Utopia of so much diversity that it results in no shared culture at all.

Just ask the long-suffering communities in Melbourne hardest hit by the Sudanese and Somali crime wave how they’re enjoying the diversity, when juxtaposed against the idea that the Victoria Police and the ABC trumpeted loudly in 2017 that the Apex gang was a “non-entity”, and was never predominantly about African crime. The SBS even pushed the narrative, along with Victoria Police, that the Sudanese kids were the victims, demonised and made into scapegoats by the media. Apparently, it’s the broader community’s fault because, gosh darn it, they just haven’t tried hard enough to be accommodating. Oh, and some of these kids are great at ball sports, so that makes it all OK!

Or ask the victims of the latest terrorist attack in Melbourne, which despite denials, looked suspiciously like the doings of yet another friendly migrant looking to impose his own particular brand of multiculturalism on Australia.

So what to do? Part 1 covered gender, Part 2 covered multiculturalism – what’s left is to look below the crust, into the academic roots of all of this and attempt to explain a world where truth is relative; facts are malleable; and reason and objectivity do not exist.

Please stand by for Part 3.