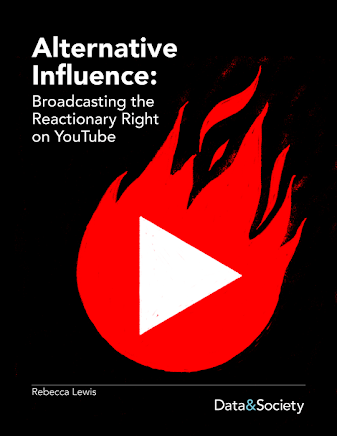 The unsurprising has happened with another hack job on all those right wing extremists peddling their hate on YouTube. Rebecca Lewis has released a “report” entitled Alternative Influence: Broadcasting the Reactionary Right on YouTube from a group called Data & Society arguing we should all be gassed. Naturally, they are funded by George Soros. The Guardian article has been well covered by a number of important YouTubers who appear (or don’t appear, strangely) in the report, such as Black Pigeon Speaks, Sargon of Akkad, and Computing Forever. These are just the ones I chose to link to. Naturally, the Guardian article on the report does not link to a single YouTuber mentioned in the report. Here I will summarise some of the Guardian’s coverage, mirroring some of said YouTubers’ analysis, and add my own analysis.

“YouTube provides a breeding ground for far-right radicalisation, where people interested in conservative and libertarian ideas are quickly exposed to white nationalist ones, according to a report from Data & Society.”

Kinda like how The XYZ works. Congratulations Guardian, you just caught up to 2015.

“Although YouTube’s recommendation algorithms are partly to blame, the problem is fundamentally linked to the social network of political influencers on the platform and how, like other YouTube influencers, they invite one another on to their shows.

“The report describes an “alternative influence network” of about 65 scholars, media pundits and internet celebrities promoting a range of rightwing political positions, from mainstream conservatism to overt white nationalism. They are broadly united by their reactionary position: an opposition to feminism, social justice and leftwing politics and present themselves as an underdog alternative to the mainstream media.”

Hear that? We’re all reactionary. Personally I prefer the term Neoreactionary. NRX if you’re trying to be edgy.

“At the more mainstream end of the network are people such as Ben Shapiro, Jordan Peterson and Dave Rubin, self-described members of the “intellectual dark web”. At the other end are white nationalists such as Richard Spencer and Colin Robertson (AKA Millennial Woes).”

Jew, globalist shill, poof, national bolshevik, and one awesome dude. But hey I listen to them all. Because I like to know what everybody is saying.

“While the mainstream members of the group typically don’t subscribe to alt-right or white nationalist ideals, they do host those who do under very friendly terms.

“They have these conversations where really openly racist ideas are getting thrown around as if they are perfectly normal,” said Rebecca Lewis, the author of the report. “This amplifies these ideas.”

So the George Soros-funded Rebecca Lewis does not want people to know what everybody is saying, and argues that white people who believe white people have a right to exist, and need their own countries to achieve that, should be no-platformed. Standard globalist outlook. This would indeed make us an underdog alternative to the mainstream media.

Libertarian Stefan Molyneux is described as someone who “openly promotes scientific racism” and Dave Rubin is criticised for accepting his words at face value. The Guardian links three times to studies, here, here, and here, to claim Molyneux promotes “bad science” but does not link to Molyneux’s copious interviews of experts on the matter, here, here and here, or try to engage his argument.

“Members of the network frequently use a live debate format, with multiple speakers arguing for hours on topics such as race, immigration and feminism. This format is particularly challenging to moderate, relying on viewers reporting objectionable content during the livestream.”

This deacribes the process by which people on the right get better at debate than those on the left. We practice. They’ll have to shut us down.

“One of the challenges for YouTube is how careful the more extreme members of the network are to avoid breaking the platform’s community guidelines. “Even the most open white nationalists know how to stay just within the terms of service. You almost never hear them using racial slurs. They couch the language in a way that obscures its violent overtones,” said Lewis.”

“They also employ persuasive influencer marketing techniques to increase their audiences and establish an alternative to mainstream news, through memes, cross-promotion and search engine optimisation.

“Search queries for terms like “social justice”, “liberal” and “intersectionality” will yield results from members on the network because they frequently use these terms in the titles of their videos.”

Savvy marketing and an understanding of how search engines work is verboten. Also, I forget that people still take terms such as “social justice” unironically.

“Lewis proposes that YouTube should consider not only reviewing the content of the channels identified in the report, but the people they host and what their guests say.”

“YouTube is choosing to continue to endorse the content of these people who are delivering really harmful messages,” she said. “It would be an opportune time to make their standards stricter for people that have that level of influence.” 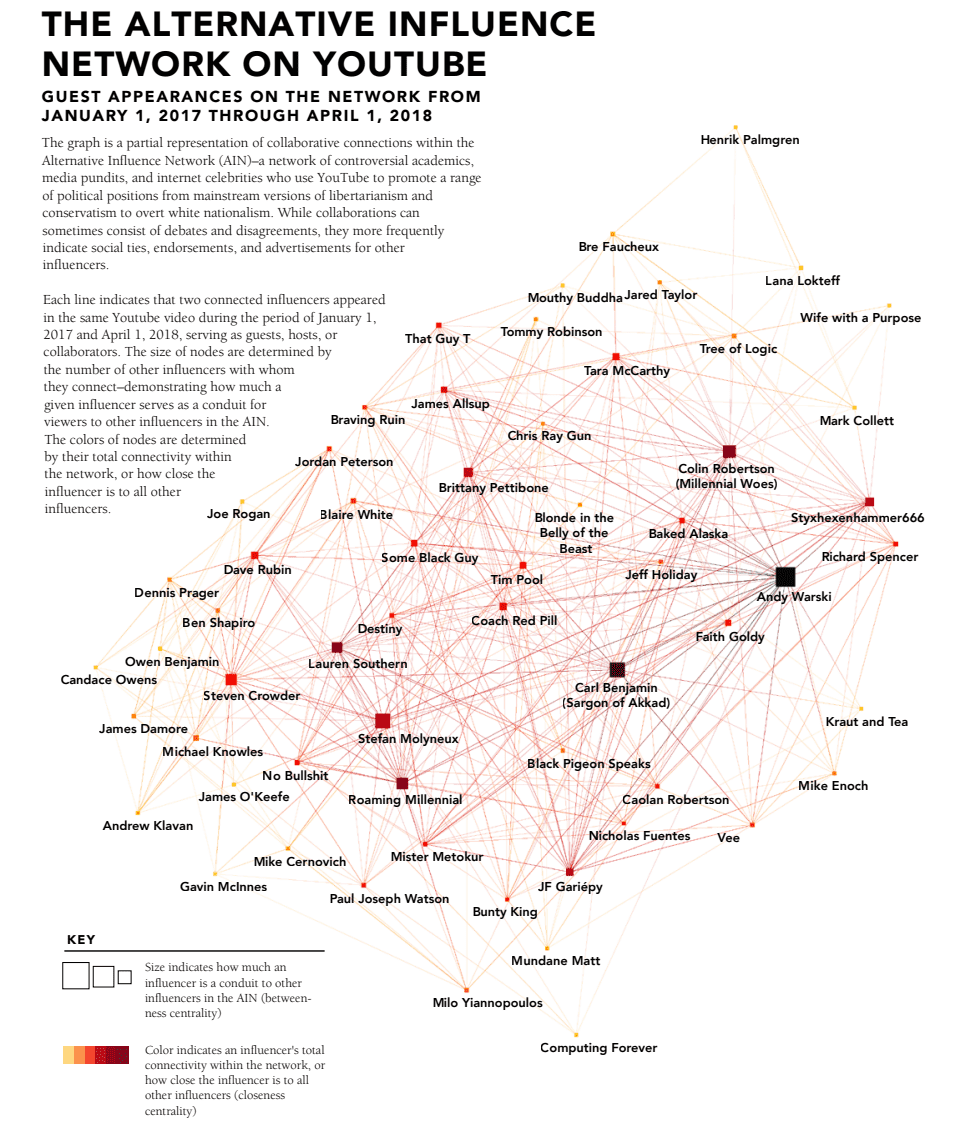 This leads to my main points:

Firstly, Many YouTubers I have listened to have tried to discredit this map by pointing out that many of the people they are linked to have disavow each other. But the map doesn’t lie. We are all connected. Jordan Peterson may indeed be an intellectual gatekeeper and a globalist shill but the YouTube algorithm will eventually lead you to Vox Day.

My introduction to this world was Bill Whittle over at the now defunct PJTV. He did superb activism work against the traitor Barack Obama but these days his crew of Steve Green and Scott Ott sound like boomercucks most of the time. But without them I would never have discovered Murdoch Murdoch.

Secondly, notice who got left off the map?

There is also a whole part of the map further off to the right that seems to have been lost in deep space. Where is Vox Day? Vertigo Politix? Blackpilled? Christopher Cantwell? The Red Elephants? TRS? Red Ice? Brother Nathanael? David Duke? TUCKER FRIGGIN CARLSON!

No mention of unperson Andrew Anglin.

Even when they show you a map of who they want to be shut down, they are still too scared to list the really dangerous ones. They are scared.

Disavowing these people won’t save you either. The purge is coming. First they came for…

Thirdly, and most importantly, if it wasn’t for the shadow banning, algorithm manipulation, subscriber and stat tampering, account deletion, outright banning and totalitarian unpersoningalready already underway, these people last mentioned would by now have massive, mainstream influence. I saw with my own eyes the views they were getting back in 2016 and early 2017, and have seen the way they have been picked off one by one. Cuckservatives try to argue that the nationalist right represent only an extremist fringe, and to appeal to a mass audience we have to keep our focus on feminism, free speech and based Asians, but if true nationalists were allowed to compete on a level playing field they would be the main game in town.

The number one goal of the globalists is to eradicate the white race. They have worked hard to quarantine genuine voices advocating for our preservation, and are working hard to prevent people making the red pill journey from the acceptable face of cuckservatism to a true understanding of everything that needs to be done.