The mainstream left now openly rejects freedom of speech, and wants to banish the concept from our public discourse. They have moved on from merely denigrating it as unimportant, something trivial to be disregarded as soon as it encroaches on big, important rights like the right of all non-whites to never ever be maligned by an accurate statement of facts. Increasingly, free speech is seen as a code-word for racism, which is of course the very definition of evil.

On Q&A last night, a circus involving pseudo-philosopher Cornell West and a bunch of other ranting nincompoops unfolded, with Senator Eric Abetz trying his cuckservative best to play the Sensible Centrist ™.

Here’s how it went down:

“Christian philosopher Cornel West has hit out at Donald Trump in a Q&A panel that focused on freedom of speech and the “right to offend”, labelling the US President a “gangster”.

“Dr West said America was experiencing a decline and that wealth inequality was increasing, and warned the US President was a “gangster” who came out of a rich but negative tradition of using his insecurity to put others down.”

So that would be a rich but negative tradition of insecure put-down gangsters. Hmm. Thought-provoking stuff from this “Christian philosopher” and “public intellectual.” (I had to look that up, because I vaguely thought he was a rapper.)

“When he grabs a woman’s private parts or makes jokes about it, [or] he’s going to get oil in another country, that’s gangster. Calling Mexicans rapists. Dishonouring and demonising precious Muslims. That’s gangster,” Dr West said.”

Ok, so from the dictionary according to this guy: 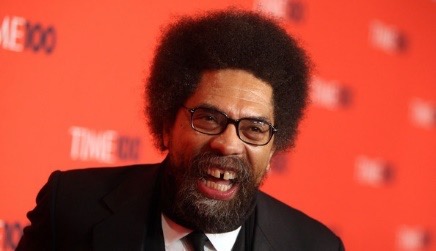 Gangster (adj.): The quality of making dirty jokes, getting oil in another country, calling Mexicans rapists, and being mean to precious Muslims.
Christian (noun): One who honours and sanctifies Muslims.
Philosopher (noun): One who attributes novel meanings to common words while incoherently attacking ideological foes.

Think about it. Here you have an incoherent, decidedly, ahem, low-IQ individual holding forth about politics and morality to an audience of millions, and making the case (as best he is able) that anyone who disagrees with his nonsense should lose their right to speak in public.

In short, he is the living embodiment of our absolute need to defend freedom of speech.

Backing up Dr West in his verbally inefficient struggle against the flaccid counterarguments of Eric Abetz was Labor MP Anne Aly:

Responding to the Senator’s enthusiastic concession that, indeed, racial discrimination is a Very Bad Thing, she proffered this rebuttal to his muted plea for free speech:

“You are denying the experiences of racism of thousands, hundreds of thousands of Australians. You are denying them their right to live peacefully, to live with respect, every time you bring up that free speech argument.”
[…]
“I think we need to be talking about the nature of debate in Australia and how we move forward with that,” she said.

So there you have it. Every time we appeal to free speech as a value in our society, we are committing a violent act of racism. By simply advocating one of the defining values of Western civilisation, we are declaring ourselves enemies of the state, of progress and of humanity. This according to a representative of the party that is tipped to win the next Federal Election.

So if you care about free speech, remember to get out and vote Liberal! (LOL, JK.)