When a woman is raped and murdered, like Eurydice Dixon, there seems to be a general consensus that the man responsible is a moral specimen of the lowest possible order. Everybody hates rapists. So far, non-controversial.

The controversy comes over the rightful extent of the blame. To blame the perpetrator alone, or to extend the blame to all men? According to a male feminist writing at the Age, violence against women is a men’s issue, and all men are in some measure responsible for the actions of the few. #YesAllMen.

The solution is another matter, though. We’ve heard that we should educate men not to rape. As if raping and murdering a girl in a park at night was an innocent mistake that you could fix with education. Rapists know that rape is wrong, and they do it anyway. That’s not a problem you can fix by education, or even by peer pressure and refusing to laugh at sexist jokes, a la the Age (seriously?). That is the age-old problem of human evil.

There comes a point when mere words are insufficient against human evil. That’s when you reach for a big stick. 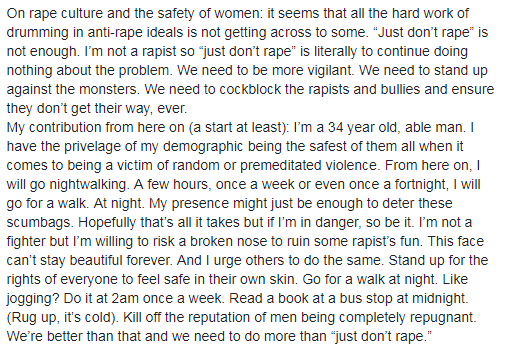 Notice something about his attitude, though? It sounds so patriarchal! As if he thinks women are vulnerable and in need of male protection. That’s supposed to be a thing of the past, is it not?

It does follow, though. If we blame all men, if it’s their problem and we’re not just saying that for the sake of a good whinge, then surely it must be their problem to fix.

And you don’t fix human evil with words alone. I doubt that a serial rapist would be deterred by your refusal to laugh at sexist jokes.

If all men are to blame for rape, then we’re returning to the patriarchy.