In 1933 the socialist Adolf Hitler was voted into power after carrying 33% of the vote.  In 1970 the socialist Salvador Allende was elected president with 36% of the vote. Allende drove the Chilean economy to the brink of collapse, depleted its gold reserves, and brought the country within months of famine.

Given that members of his party had stated that they were prepared for a million Chileans to die in order to achieve socialism, the fact that General Augusto Pinochet launched a successful coup which led to the death or disappearance of about 3000 communists, can be considered a mercy on the Chilean people. 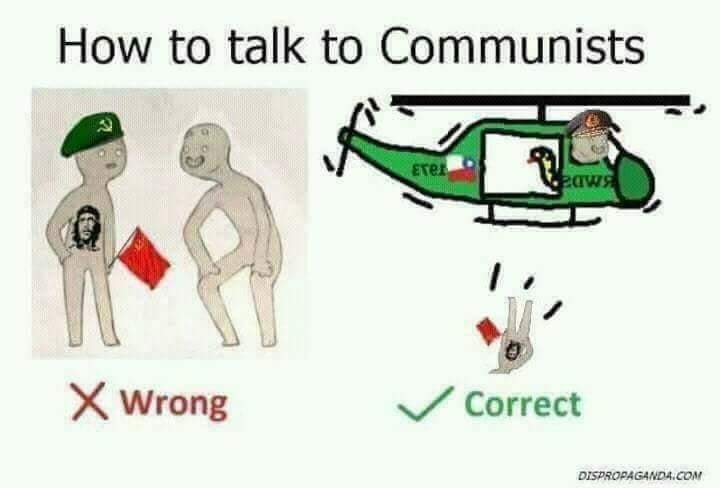 South American socialists and the broader international left have never forgiven him for it. But the crisis in Venezuela shows why Pinochet dropped communists out of helicopters – because in the long run it saves lives.

“This is the most important challenge,” said Santos, speaking of the need for a peaceful transition of power in the neighboring country, “because we have more than a million Venezuelans now in Colombia”.

“This is putting an extraordinary amount of pressure on our institutions, our health system, education system and even on the workforce here in Colombia.”

“In Venezuela, the Maduro regime is using hunger as a weapon,” the official said. “We’ve seen multiple reports that neighborhoods not voting for the regime had their access to subsidized food benefits cut.”

The people of Venezuela are being starved by communism, and a migrant crisis is emerging which will only add to the numbers clamouring to ultimately get into the West. Who could ever have predicted this… Donald Trump, that’s who:

So what is the solution? Naturally, globalist outlets are baffled.

From the hilariously named Financial Times:

“It is difficult to see what might change in Venezuela to stem the exodus. The economy has contracted 40% in five years and is forecast to shrink further still. The IMF expects inflation to hit 13,000 per cent this year.”

As stated, the blog is actually called the “Financial Times”. One sentence about ending extortive wealth transfer policies, reducing regulation, privatising industry and encouraging free enterprise would have been enough. NPR is even funnier:

“Venezuela’s deterioration toward despotism and despair comes as little surprise. For years, experts have warned that increasing executive control of the country’s democratic institutions alongside gross mismanagement of its oil-dominated economy would lead to worsening conditions for its 30 million citizens.”

Socialism, Communism, Marxism, Agrarian Reformers, a Collectivist Economy, whatever you call it, is defined by increasing executive control of democratic institutions and gross mismanagement of the economy.

What is the solution, then? Conservative outlets regularly point out that the crisis in Venezuela is the fault of socialist economic policy and the solution is a return to the free market. But in the meantime, it is important that we lift not a single finger to help.

Here is an electoral map of the Latino vote in the 2016 US election:

You import Latin America, you get socialism. People who vote for socialism must learn the consequences of their actions. Letting them in as refugees lets them off the hook for their poor choices and discourages them from changing their behaviour in the future, in the same way that welfare for single mothers rewards poor choices and encourages them to have more illegitimate children.

Forcing Venezuelans to stay in Venezuela would be far more beneficial in the long run. It will save lives, because eventually the pressure will build in Venezuela to the point that someone decides to do this: