Editor: This is part 2 of Lucas Rosas’ exploration of the major players in the Syrian Civil War. You can read part 1 here. This article was first published on October 8, 2017. For some reason, the Syrian Civil War has been in the news again, so it is a good time to encore. 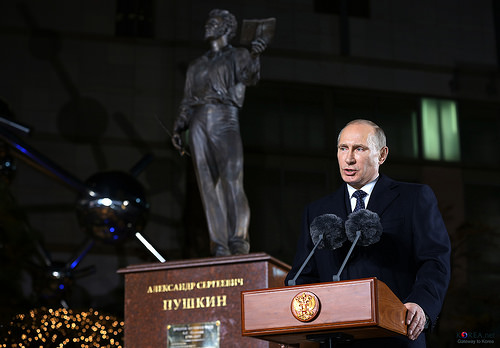 Regardless of any talk about the Tartarus naval base, Putin wanted one thing out of Syria: a diminishment of U.S regional power. Fortunately from his perspective he had John Kerry and Barak Obama to deal with.

The deal for Assad to give up his chemical weapons [whether he did or not] was a masterstroke of international chess. Putin saw that the Western public’s appetite for another full scale Middle Eastern invasion simply didn’t exist and that the political class in both the U.S and U.K had badly misjudged public opinion.

The Russian intervention since then has made it painfully clear that despite their military inferiority to the U.S, the Bear still has teeth and is far smarter about using them than Uncle Sam.

Putin has staked a claim to be the new major sponsor of Iran as a regional superpower, displayed that Russia does indeed support its friends in the world, and gained prestige by blacking the eye of an incoherent and sometimes contradictory U.S foreign policy and intelligence establishment.

Considering that only a few years ago Russia seemed under siege, with U.S-backed coups toppling their allies in Georgia and Ukraine, and both NATO and the EU creeping ever more closer to the Russian Motherland, the turnaround has been dramatic to say the least.

There’s a reason why after so much time in control and with all his many faults, Putin is still relatively popular amongst his people; the man isn’t stupid and it seems the people he puts around him aren’t either.

Holy crap what a bunch of brutal, sadistic retards these idiots turned out to be.

The success of the Bolsheviks managed to convince Communists across the world even down until today, that all they needed to do was have the correct party platform and maintain enough discipline amongst their cadres and a small vanguard could take over a gigantic country.

The success of Mohammed in taking a rag tag of desert tribesmen and humbling the two greatest empires of his time did something similar for Muslims. All they have to do [the theory goes] is stick EXACTLY to the prophet’s plans and Allah will take care of the details of world conquest.

Empire, wealth, cities, slaves, loyal followers and legions of nubile women will all be yours if you just use this one simple trick!

You can understand why they got carried away. The ISIS assault into Iraq ran into Iraqi army units filled with conscript Sunni soldiers who had been suffering under mostly Shia officers who stole most of their pay and sold most of their equipment. By the time ISIS actually showed up most of the soldiers being paid on the books had gone back to the family farm. Western Iraq fell like a house of cards and the central government was too chaotic to do anything about it.

In Syria the black pyjama boys stumbled onto an ongoing civil war and managed to make the most of it by simply being more brutal than the other rebel groups. While everyone was fighting over the more populous West of the country, ISIS scooped up the East [including most of the oilfields] and then pushed north to wipe out the Kurds.

It is worth pointing out that until the Russians poked their nose in, the “Anti-ISIS coalition” wasn’t actually doing all that much to fight ISIS, more like waiting to see if they could overthrow Assad and then be ready to help build up a U.S puppet rather than an Iranian/Russian one.

The poor murderous fanatics must have believed that it was all so easy. Until the U.S-backed Kurds pushed them back at Kobane they hadn’t really met any actual opposition. Even NATO member Turkey was quietly buying oil off them for crying out loud. They were free to rape and steal and behead as much as they liked.

One suspects that the battle-hardened Chechens who made up some of the best foreign fighters in ISIS knew the good times wouldn’t last, but the rest of them must have thought they were in clover.

Well the party’s over.

Now the Russians are bombing them far more enthusiastically than the Yanks ever did. The pesky Iranians have put masses of well-trained, well-motivated and well equipped Shia militia into the fight to bolster the anaemic Syrian government forces. The Turks who had been so friendly in the past crushed them with tanks. The Kurds they almost eliminated have shiny brand new U.S kit and strange white guys with beards and wraparound sunglasses fighting alongside them. The capital of their caliphate is a mess of broken rubble, and even more broken bodies with revenge-minded enemies searching the ruins for the last amphetamine befuddled holdouts.

Hasn’t really worked out the way you thought it would did it fellas?

Despite what my XYZ colleague Moses thinks, the Syrian civil war is not a giant distraction to allow Israel to exploit Golan Heights oil reserves. Regardless of international law on the subject I suspect the Israelis will exploit that oil whenever the hell they like, and would have done so without any war or disturbance in Syria.

But Israel has been involved in the conflict, bombing Syrian government forces when they get too close to the rebels [including ISIS] who now infest the Syrian side of the disputed border between the two. One gets the distinct feeling that originally the Israelis were quite pleased at the idea of regime change in Syria, and even if they didn’t try and help it along, certainly wouldn’t have stood in the way.

Israel wouldn’t really have minded if a bunch of Salafist nutcases took over in Syria; they deal with Sunni Arab nutcases all the time. Behind closed doors they even co-operate closely with the Saudis who publicly ban all Jews from entering their country and all Jewish airlines from flying over it.

But things have taken a turn for the worse as far as Israel is concerned. Because while Israel doesn’t really fear Arabs [they’ve kicked their arses repeatedly] they seem utterly petrified of Persians.

And Iran hasn’t just flooded Syria with Hezbollah and Iraqi Shia militias; they’ve also started setting up rocket factories. Of course the Israelis have immediately started bombing them, but they won’t get them all.

I remember talking to an IDF veteran of the 2006 war between Israel and Hezbollah. The Israelis had a couple of their people kidnapped and as a response they launched a full scale punitive expedition, which is exactly what Hezbollah wanted them to do.

The Israelis assumed that since they were fighting Arabs the war would go as wars against Arabs usually did. Brave individual warriors would flee in confusion as their ineffectual command structures broke down and shattered under the stress of combat.

That didn’t happen in 2006. Hezbollah, trained and funded by Iran, had built huge networks of tunnels, some big enough to drive trucks through. They waited for the Israeli soldiers to advance and then popped up from behind in ambush. It was still militia versus regular army so the Israeli kill rate was respectable, but the casualties were too severe to handle for the modern consumerist society most of Israel has become.

Israel learned the lesson; Persians aren’t Arabs, and even Persian controlled Arabs are far more dangerous than their Sunni cousins.

Israel really doesn’t want Syria to move closer into the Iranian orbit, yet until peace negotiations begin they don’t really have many cards to play. What began as an amusing display of a dangerous neighbour ripping itself to shreds has for Tel Aviv suddenly taken a dire turn. What they do next will be fascinating.

Hundreds of thousands have died. Millions have fled and are in refugee camps in the region or in Europe. Billions of dollars in infrastructure has been destroyed. Numberless priceless works of art and architecture have been smashed or stolen. Countless lives have been ruined, never to recover.

And at this point it looks as though the most likely political outcome is that everything will go back more or less to the way it was before.

That it will all have been for nothing.

And what’s worse, that’s being optimistic. If the U.S gets pigheaded we could see an entirely new proxy war develop.

One thing is for certain.

It’s time to ask God some serious questions as to why he put all that oil under the Arabs; it doesn’t seem to have done them or anyone else any good at all.