Prominent Australian transvestite lunatic and former army officer before he developed a serious case of womb envy Malcolm “Cate” McGregor has publicly ditched his bestie Tony Abbott for the crime of daring to have an opinion that differs from his own.

Behaving like an angst ridden teenage girl, (the hormone treatment must be working), McGregor performed the excoriation of his friendship on Facebook of all places, which is one down the social media scale from sending a text message.

“He was there in critical times for me,” she said in the post. “But his contemptuous dismissal of trans identity for shallow political expediency makes it impossible for us to be friends.

“I will make no further comment on this and wish him well.”

“Ms McGregor said Mr Abbott’s comments in an opinion article published in The Sydney Morning Herald, which linked gender fluidity to the same sex marriage debate, “was a bridge too far” and “cut me to the quick, quite frankly.”

“Mr Abbott wrote “a man is not a woman just because he wants to be, and a same sex relationship should not be able to become a marriage just because activists demand it.”

“There is plenty of room for respectful disagreement on same-sex marriage, we are on different sides of the fence on that issue. As is his sister.”

“I just didn’t see why he roped in gender fluidity. It really rocked me and was bewildering considering our previous conversations,” Ms McGregor said.

“I don’t want to be a snowflake about it. I’m not a leftist on the same-sex marriage issue. I was opposed to Safe Schools for example, but I have a profile as a trans woman,” Ms McGregor said. “I simply couldn’t overlook his comments.”

McGregor stated that he doesn’t want to be a snowflake about it while displaying behavior that may well lead to some actual certified snowflakes handing in their respective snowflake badges due to the fact that they now know that they’ll always come last in the snowflake races if McGregor shows his badly mascaraed face within a thousand kilometer radius.

Please note how I use the male pronoun when referring to McGregor. I stand with Tony Abbott when he declared that a man cannot become a woman just because he wants to wear Chanel No. 5.

“While she said she believed Mr Abbott was genuine in his support for traditional marriage, she objected to him using “trans people and kids as whipping people, to make a political point about the same sex marriage debate.”

If anyone has a case for ending a friendship here it would be Tony Abbott. I for one would not continue to associate with any individual if their sense of norms and decency extended to believing such a gross monstrosity as “trans kids”. Encouraging such child abuse is bad enough, but to do it so as to further a personal political agenda as well as to substantiate one’s own lunatic acts is simply beyond the pale.

The curious case of children suddenly turning towards transgenderism in droves is eerily reminiscent of the mass hysteria which caused hordes of teenage girls in Salem to declare themselves possessed by witches. The Other McCain links to a comment on the 4th wave now feminist blog.

“When traveling for business recently, I sat next to a school counselor on the plane, and as we chatted about this and that, I gently raised this topic. She said something very interesting. She said that at her school, it has been nothing less than something straight out of the pages of Arthur Miller’s “The Crucible” — and eerily so. Much like the mass hysteria in the 1600s of Salem girls overcome with fits and trances as they thought themselves possessed and plagued by “witchcraft,” so the sudden-onset trans phenomenon has swept through her high school. She said that you can see the patterns ripple across friend groups, and teens who never experienced “symptoms” before, are suddenly at 15 and 16, making trans declarations and then reconstructing stories of their lives that assert that the “wrong body” trouble was present in them all along, lurking but unrecognized. She expressed deep concern about finding some way to mitigate or dampen what she called this “emotional contagion” because the only option the school is given is affirmation without question. And all the books the parents are reading are saying “affirm or die,” so if you raise a peep about any other kind of possibility of exploring alternatives to medical transition, you are threatened with the potential liability of having caused a suicide. She actually welled up in tears at one point as she spoke about her sense of helplessness at watching this spin out of control. Is this a return to the dynamics of the Massachusetts Bay Colony and the Salem witch trials? Or, has this kind of suggestibility been with us all along and teens are especially susceptible? The outbreak of fits related to “witchcraft” was a case of what some have called “social terror as communal contagion.” How might the forces of suggestibility be at work now? And is there any way to diffuse them?“

It’s pretty hard to defuse them when go-getter Malcolm “Cate” McGregor is out there publicly ditching friends willy-nilly who dare to object to such encouragement of what is a mental illness. Remember that, folks: wanting to change your sex and then trying to go through with it by getting important bits of your body surgically removed whilst consuming gob-loads of dangerous drugs that try to convince your body that its DNA got things wrong is a mental illness.

In former times McGregor would have been the mostly harmless and silly hysterical queen that he is. But in today’s so-called progressive world his lunacy is not just taken seriously but actively pushed onto children as young as the age of six. 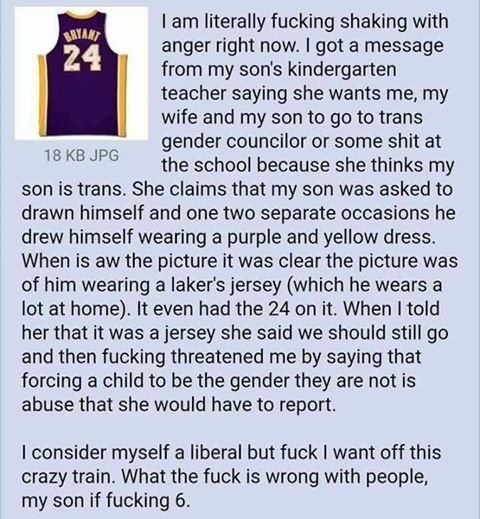 That right there is child abuse. There is no other word for it. That the media would even consider taking seriously a mincing cross-dressing poof flouting around sprouting hysterical tirades at former friends because they won’t accept certain biological absurdities is ridiculous. That they condone such child abuse whilst simultaneously seeking to destroy the catholic church for turning a blind eye while priests engaged in child abuse is hypocrisy taken to extremes.