The following quote is attributed (not without some controversy) to Captain James Cook: 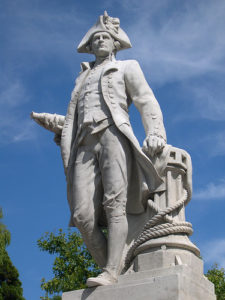 “Mr Banks, Dr Solander, myself, and seven others, properly accoutred for the expedition, set out and repaired first to the huts near the watering-place, whither some of the natives continued every day to resort. And although the little presents which we had left there before had not yet been taken away, we left other of somewhat more value, consisting of cloth, looking glasses, combs, and beads, and then went up into the country. We found the soil to be either swamp or light sand, and the face of the country lightly diversified by wood and lawn. The trees are tall, straight, and without underwood, standing at such a distance from each other that the whole country, at least where the swamps do not render it incapable of cultivation, might be cultivated without cutting down one of them. Between the trees, the ground is covered with grass, of which there is great abundance, growing in tufts as big as can well be grasped in the hand, which stand very close to each other. We saw many houses of the inhabitants and places where they had slept upon the grass without any shelter, but we only saw one of the people, who the moment he discovered us ran away. At all these places, we left presents, hoping that at length they might produce confidence and goodwill.”

No wonder Spray Tan Stan wants to shut him down.