This article was originally puublished on March 17, 2016.

One time back in the early to mid 90’s, my very religious family was up in arms of over the salacious material being served up by whatever Channel 7’s competitor to 9’s A Current Affair was called at the time. They were appalled that a front runner for the mayoral election on the Gold Coast was an advocate for nude beaches, but even more appalled that Channel 7, and that horrible Stan Grant, were running a story on it. 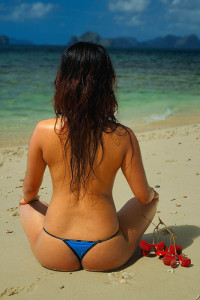 Of course, as a boy in his early teens, I was only too delighted to join my family in watching such atrocious television, and listen to them bemoan the fall of society. As all good current affairs shows do, they constructed a reenactment, (or is it enactment? preenactment? who cares..) of what such an event on the Gold Coast may look like. The prospective mayor was only too happy, with attractive female model in tow, to strip down and go for a dip, on camera. Off he ran, bare bum for all to see, while the more demure model kept her pants on, and her breasts were conveniently hidden from view as they ran away from the camera and toward the water. Just as the story finished, the mayor and his lovely accomplice returned from the water, toward the camera, but thankfully for all involved, shown only from the waist up….

My family howled in protest as Stan Grant, with a cheeky look on his face, closed with “Looks like he’ll liven things up.”

A few years later, I remember there being some controversy over a break-up and a new relationship which involved said Grant and another TV personality. My mind is scant on the details, but I clearly remember watching Anthony Mundine defend him, (again, on one of the two magnificent shows that air at 6:30 on either channel 7 or channel 9,) on the grounds that as an Aboriginal, he was acting in accordance with his people’s law, in having two wives.

I was shocked. Utterly shocked.

I had no idea Stan Grant was Aboriginal.

Anyway, apparently, as I learned today on the ABC Classic FM Midday Interview, his grandmother used to tell him, again and again, that he will be Prime Minister one day. And Margaret Throsby heartily agrees.