With the postal plebiscite just around the corner, no doubt we are all about to be inundated with a whole heap of advertising from the gay marriage lobby. The gay marriage advertising so far seems to be aimed at the women folk of Australia, appealing to emotions rather than logic. Like a lot of marketing, the aim might be to influence women to decide with their heart instead of their head. No doubt, changing the legal definition of marriage to include you-know-what is a very hard sell for the 99.5% men who are not gay, and who may well be more cynical about modern marriage. It seems the gay lobby knew this all along and are instead talking to women. So far, the “marriage equality” advertising is all about feelings.

The silliest and perhaps most effective gay “marriage” slogan has been “love is love”. It’s really nonsense because if we stop to think about it, we all know that love is NOT love. We see all types of love every day, there is puppy love and coffee love, there is tinder love and reality TV love. There are alcohol lovers and meat lovers. There was a woman in England “in love” with a tree and a man in Japan loved a doll. A man in Russia married a pizza. They all had their time in the sun as their silly “wedding” ceremonies went viral on social media, and then the world moved on. 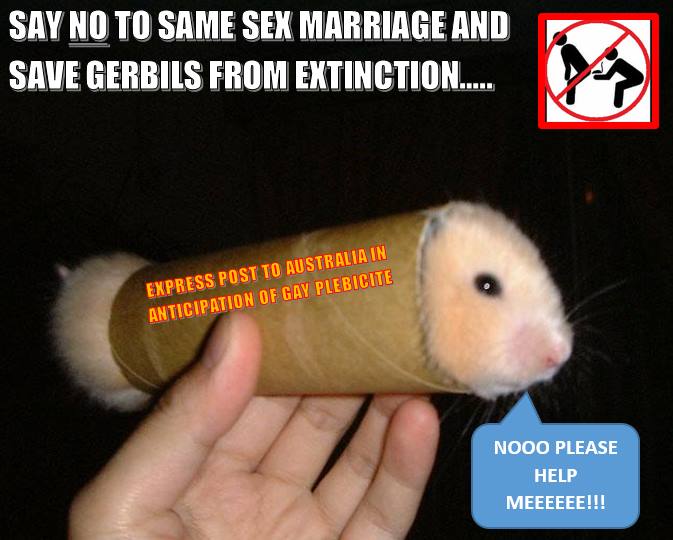 Then there is that genuine love between a man and a woman. Not just lust, here we are talking about the “in sickness and in health type of love”, the “until death do us part” love. That type of love requires commitment, it’s not all about feelings, and naturally, heterosexual love leads to new life.

The children part is where the laws around marriage come in. Ever since Freddy and the Flintstone’s, society has upheld marriage as a thing between one man and one woman. Yes, some societies allow divorce and others multiple wives but bugger them for now, lets keep this simple. Married love should be a permanent thing, and for the sake of the children, it works out better that way. It also happens that it works out better if the man and the woman keep it an exclusive thing. Shagging around destroys marriage and shagging around with the definition of marriage to include homosexuality, destroys marriage.

“Love is love” is clearly horse excrement, but the slogan works because generally people don’t always stop to think. People don’t care, and when people don’t care, they tend to accept the simplest or most popular explanation. Sometimes the issue will come back to bite them and only then are they forced to stop and deal with it. Men generally care about their family, their job, their money. Women care about all that and more; their health, what they look like and what other people think about them. So women are the prime targets for the same-sex marriage activists who are desperately seeking the support of someone who cares.

Here are my top three reasons why women who care should vote NO way to gay marriage:

Reason No. 3. Vote No to get gay sex out of the classroom.

2. Vote No to protest against gay adoption and sexual abuse of children.

Would a sane woman leave her children in the care of a “couple” of men for any length of time? Definitely not! Not for even for five minutes you say? So why would you wish that on someone else’s child? I’m awfully sorry that these types of comments supposedly offend Penny Wong, but why should any child be put in such a risky situation? Perhaps in many cases the child may be perfectly safe and loved in these relationships but that is irrelevant. The fact is that there is a real chance of exploitation and that is why gay adoption must be stopped.

At this stage the missus might interject with, “but this plebiscite is not about gay adoption rights, gay men can already adopt children!”

It is true that in most states, gays can adopt children already. This is a gross injustice and a miserable state of affairs and the children have no choice in their plight. These laws need to be repealed right now because it is unfair for a child to be brought up without their father or mother.

At this stage the missus might interrupt your rant again with, “but what about broken marriages and single parents, and what about abusive hetero couples who adopt?”
Tell her not to interrupt you while you’re speaking and that two wrongs don’t make a right, and don’t stop for a breath as you tell her that these laws that normalise fatherless and motherless homes need to be repealed at once. To turn back, we first need to stop heading further down that same road. Did you or I vote for these gay adoption laws? Hell no, I remember politicians promising jobs, not gay adoption! How many cases of child sex abuse could have been prevented if the gay adoption laws were put to the people? This is yet another reason to vote NO to same sex marriage. The no vote is a vote against the continuation of the slow destruction of society caused by careless politicians.

1. Vote No because you have been lied to all along about “marriage equality”.

The number one reason to vote No is that the whole premise of “marriage equality” is a lie. If the definition of marriage is changed – it is changed, it is not equal, it is not the same thing. Even if the definition in the law books is changed, same sex “marriage” still exists in creepy inverted commas because it is not real marriage, which is a heterosexual thing. Same sex couples can not enjoy the same “rights” to real marriage because marriage is a man and women thing.

These are the most blatant lies, and there are many more subtle deceptions. Gay men are statistically very unlikely to want to marry anyway. Generally, the gay lifestyle is one of multiple partners. Some studies have also cast doubt on the idea that “Lesbians” actually exist, in the pure sense of the word meaning women who are exclusively attracted to women. It has been found that most women who are same-sex attracted are also attracted to the opposite sex at least for some part of their lives, and often the object of their attraction swaps from one sex to the other. Other same-sex couples find it strange that gays and “lesbians” (Inverted commas to signify here that I’m sceptical about your existence Penny Wong) would want to “ape” the traditional religious marriage ceremony.

Then there is that quote from Lesbian activist Ms Masha Gessen in 2012.

“Fighting for gay marriage generally involves lying about what we’re going to do with marriage when we get there.”

In the context of this reality, the wonderful images of long term gay and “lesbian” couples wanting to get married that are used in the “Marriage Equality” adverts appear pretty fake, or at least unrepresentative. Fortunately parliament are looking at rushing through some laws against misleading advertising. Sadly it’s a bit late; the deception has gone on for a long time now. The publicly funded SBS, a publically have had their logo as a supporter of “Marriage Equality” for almost five years now.

The people of Australia will need to consider carefully, that changing the legal definition of marriage to something that it is not, is really all about destroying the truth.

So if you’re a man, go ahead and tell the woman in your life that you will think less of her if she votes yes for gay marriage. You need to make her stop and think about why she is planning on voting yes to destroy marriage. She probably has a vague feeling that voting yes is doing something good for someone. So hit her up with the above three reasons, but just don’t hit her physically!

A final question – what if someone you know is gay or lesbian?

“Our friend so and so’s daughter came out as lesbian, shouldn’t we support her choice and support her right to marriage like anyone else?”

The chances are that the same-sex attracted person has had a rough life. The chances are that they have been used and abused by someone they trusted. If they are a gay man, the chances are that they will have multiple partners and won’t settle down to a long term relationship anyway. Everyone deserves to be treated with love and dignity and respect. No one in Australia should be treated as a “second class citizen”, and the fact is that they are not. Same-sex couples enjoy all the same rights as heterosexuals under Australian law, including some that should be reserved for heterosexual marriages (adoption). Thankfully, this plebiscite being a private thing between you and the postman, the gay uncle will be none the wiser that you voted no. He might even understand why the country is so much better off without it.

An article appeared in The Spectator this week which contained this ridiculous statement:

“This magazine supports homosexual couples being allowed to ‘marry’ under whatever terminology or laws the nation deems appropriate, so long as any new legislation does not alter existing freedoms of religion and dissent.”

That statement is a bunch of fair-sounding-but-impossible bull$&*t. When you change laws, you necessarily change existing freedoms, so it’s wishful thinking of them to think that they can have their cake and eat it too. Sitting on the fence is very bad for posture in this debate.

And that changed everything.