As many of you Victorians know, at least the majority of Melburnians anyway, there were three incidents today on major exits from the city all in a very, very short space of time, the biggest on the M1 outbound where one is confirmed dead and another critical (at time of writing).

Now from friends in emergency services I was privy to some details (as I stayed at their work while I waited in vain for traffic to die down.) 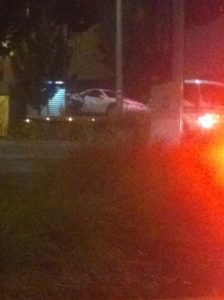 The initial cause of the accident was a car changing lanes into the path of a truck, not giving enough space and braking. Following behind this truck was a second, bigger truck who, like all trucks I see on the highway, has about the space of a Smart Car between nose and tail. This second truck didn’t have distance to stop in time as well and, due to our natural instinct to avoid ones own demise, the driver turned into the two cars beside him, crushing them into a barrier and killing the driver of one car instantly.

Now the main cause of this incident is poor driver judgement. This leads back to all my road articles talking about inadequate driver training and nothing being enforced on our roads that promotes actual safe road conduct. You can be driving 20 kph under the speed limit, but if you’re tailgating someone or merging, you’re more dangerous than someone driving 20 kph over and giving safe distance.

Now, not being there and only getting my information second-hand, I can merely speculate. However, after many, MANY years of being on Melbourne roads and highways, I can put together a safe assumption of how it could have been avoided.

Melbourne drivers are impatient; they see the slightest gap and they charge up and shove in. They have this sort of tunnel vision that makes them not read the road past the car ahead. So my assumption here is that the first driver saw the space the truck left in case he needed to stop fast, and jumped in the gap without seeing what the flow of traffic was doing until he was part of events.

The second truck driver was riding in the wake of the first, expecting that should the first driver need to stop they wouldn’t have a collision as they would be slowing at a comparable rate. This is incredibly dangerous, as the second truck driver has no vision beyond three feet to the tailgate in front. All hope of judging what is happening is gone.

Sadly the cars to the left were not in the wrong, travelling in their own lanes, but were affected the worst of all involved. When a truck suddenly careens into you, there is not much you can do in the small moment that you have realised what has happened. If you brake you’re going to end up in the wheels, and (I saw one of the cars post-accident) it was not a car with enough power to pull forward to safety in an opening of the throttle. (Not that that would have been likely even in a Tesla or M-series, due to human reaction times.)

To keep everyone safe, drivers need to be trained better and monitored better. I would prefer to see more cars pulled over for dangerous driving than see another officer with a radar gun. Make defensive driving mandatory.

Have in place programs, licensing, regular updates, etc, to make people more aware of their surroundings. If they don’t, and therefore don’t make the roads safe for themselves and others, then take their licenses away; driving is a privilege and not a right!