“87% have said, ‘We don’t want this guy’.” This is exhibit A in the kind of selective statistics that have worked a charm for mainstream media in regard to a good many issues in their constant quest to spread disinformation. The quote from political scientist Andre Krouwell is proudly trotted out by CNN to frame the Dutch election as some kind of failure for Geert Wilders’ PVV.

Krouwell’s musings, along with those of most of the mainstream media, are an interesting interpretation of the actual statistics that are very easy to find, and remarkably in this case appear IN THE VERY SAME ARTICLE showing the complete and utter shamelessness of CNN and others in ignoring the inconvenient and twisting the narrative to suit their agenda.

What do these statistics tell the average person not looking to just take the ones that reaffirm their confirmation bias as if they were at a salad bar? The house majority of the VVD is 33 seats. The article frames this as somehow being a landslide, and a rejection of populism. It sounds great in theory, but look more closely. The VVD LOST seven seats. This isn’t an ‘affirmation of the virtuous’. This is a disastrous drop in support of 21.21%. To put it in perspective, six Liberals lost their seats in the recent W.A. election and the media (correctly) framed it as a bloodbath. 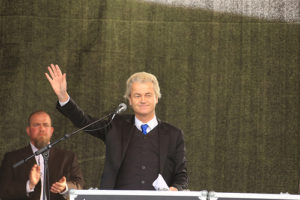 Now onto the Geert Wilders and his PVV, whom mainstream media are almost universally framing as having s— the bed yesterday, when nothing could be further from the truth. The PVV now has twenty seats. This article and others interpret their result as failure and ‘rejection’, but they picked up eight more seats. That’s a 40% gain in support. As opposed to a 21.21% drop in support for the party that only just squeaked through, no doubt after having their policy and campaign heavily influenced by the rise of the PVV.

Let’s go back to the magic ‘87% rejection’ argument. The PVV picked up 13.1% of the popular vote, which is how Krouwell arrives at his devastatingly ominous sounding interpretation of the fact that 87% of voters cast their vote elsewhere, as the far sexier-sounding 87% rejection of Wilders himself. That all sounds great till you consider ALL THE NUMBERS instead of just cherry-picking the PVV result.

The severely haemorrhaging VVD (a major party, I might add, not a start-up minor party) crawls across the line with a 21.21% drop in support and only 21.3% of the popular vote. Would CNN’s expert economist describe this as, “78.7% said, ‘We don’t want this guy'”?

Taking it further, the Green Left received a paltry 8.9% of the popular vote, but Hell will freeze over before Krouwell uses his same ‘rejection algorithm’ that works so conveniently to demonise the PVV to announce that, “91.1% have said, ‘We don’t want the Green Left and their fringe policies’.”

They weren’t a viable alternative by any stretch for Western Australians, yet as many of us predicted, enough people were frustrated enough to vote for them anyway to get a decent result in the seats where they did run, which should be a sobering thought for Labor and the Coalition. If a disorganised rabble had this kind of impact based on a wave of discontent on their first outing, what will happen next time when a more organised minor party shows up?

Make no mistake, the Dutch election especially was an affirmation, rather than a rejection, of populism. Wilders makes both Trump and Hanson appear quite centrist by comparison, so one can only imagine how successful his party would be if he dialled down his rhetoric to more widely palatable levels. Trump wouldn’t be sitting in the Oval Office had he referred to illegal immigrants as ‘scum’ a couple of weeks out from the election, so Wilders no doubt kicked a bit of an own goal there.

But the fact that things are apparently so bad in Europe that enough voters will overlook some salty language to give a party an extra eight seats says a lot. If the mainstream media somehow interprets what has occurred in the Dutch election as a rejection of Nationalism, and a rejection of populism, we can only wait with baited breath to see the illusionist magic show that will be the post-election MSM coverage in France later in the year.