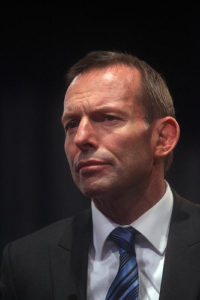 After the horrific News Poll earlier this week, there must have been some nervous shifting on seats in the Liberal party room in Canberra, as the voting intentions there recorded would, if repeated at an election, be a bloodbath for the Government. Any rational member of the government must now be desperately searching for a strategy to revive their electoral prospects, or at least avoid a bloodletting on the scale of Battle of Stalingrad. It actually isn’t that hard, as less than one week ago Tony Abbott laid out a neat set of points that would be an excellent start at recapturing the lost Liberal voters currently flocking to tell anyone who will listen that they intend to vote for one of the slew of newer conservative parties. Desperate men and straws normally make quick bedfellows, although if you are a Liberal / National MP apparently not so much, because today Andrew Bolt and others are reporting sources within the Liberal ranks whose only conclusion from recent events is that the government will lose the next election, which is probably right, and that they are better off allowing that to happen rather than change leaders again, which is certainly wrong.

Accepting the certainty of defeat with two and a half years to the next election seems unnaturally pessimistic, although if the unspoken assumption is that Turnbull must lead the government wherever it is going, including over the nearest cliff, I suppose it makes a certain sense. Of course, the assumption that changing leaders again must amount to electoral death is a fallacy based on a misinterpretation of Labor’s experience in the RGR era, and the Liberals’ experience with Turnbull. There is no doubt that those changes were and are disasters, but it seems no one bothered to ask why. The answer is in fact quite obvious and simple; in both cases the new leaders were backstabbing, self-interested individuals whose objective in seeking high office were wholly and self-evidently personal, and who seemed intent on placing themselves at odds with the electorate to retain power. In short, they were exceptionally poor choices that inevitably became electoral liabilities.

To leap from those events to a conclusion that any change of leadership, including one to correct an obviously wrong decision and a betrayal of the electorate, carries the certainty of defeat, is muddleheaded at best. The polls are telling the Liberals and Nationals that the electorate has seen through Turnbull, and they want him gone. The idea and argument that the government will be punished for doing what the electorate plainly wants is nothing more than an evasion and an excuse for maintaining his leadership against the will of the electorate. Rational people do not face down the firing squad because they don’t like the person who can deliver the pardon.

The reaction does, however, say much about whether the Liberal party is, in fact, redeemable, as it now seems to be controlled and populated by people who apparently cannot abide the possibility of advocating for and implementing a fairly standard conservative agenda of the kind set out by Tony Abbott. If it is really the case that a majority of the parliamentary Liberal Party would rather go into opposition than do what the conservative voter base plainly wants, then the Liberal Party as we know it is dead, and we, the voters, must hasten its demise. By 1945, Menzies knew that the United Australia Party had outlived itself, and he tore it down to create the Liberal Party. It seems we are at the same crossroads.