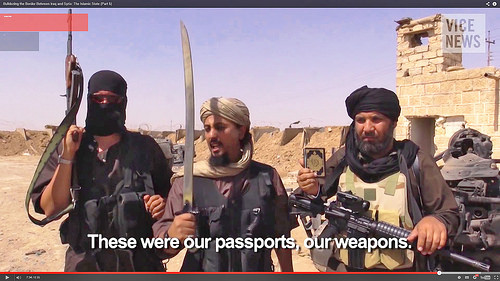 As Donald Trump continues to go about doing exactly what he said he was going to do as President, something almost unheard of in the history of politics, the left-wing meltdown just gets louder and more exaggerated. Every single action is met with howls of hyperbolic protest. It’s almost like they think we haven’t heard it all before.

The howling came to fever pitch when Trump announced his ban on immigration from certain countries in the Middle-East, countries that were actually highlighted by Obama as being security risks. Witness the headlines:

In other words, if there is anything even remotely negative to be said about the immigration ban, they are going to say it. Those people who are against it are to be considered “experts” and everyone else is to be ignored. This kind of garbage is standard practice on the Left.

From Hussein Nadim in the Sydney Morning Herald:

“Islamists and extremists that have long failingly debated against the ‘evils’ of democracy and the US are likely having a ‘told you so’ moment.”

What? “I told you they wouldn’t let you in if you tried to go there”? Who’s been telling these people they would be freely allowed into the US in the first place? What about the millions of people let into Europe already? I don’t see ISIS, and other Islamists, slowing down their anti-European rhetoric because millions of fighting aged men were let in.

As for “debating against the ‘evils’ of democracy”, this is just a thinly veiled attack on democracy. An attack almost certainly provoked by the fact that his side lost repeatedly last year. If Islamists are debating against democracy, they are doing a hell of a good job in the Middle-East, which is almost completely ruled by dictators and monarchs. It even looks increasingly like Turkey is going to fall into the hands of a dictator. So, far from their arguments “failing”, it seems Islamists have been winning their own war against democracy for a while now, big time.

“However, one stroke of Trump’s pen may have vindicated Islamists giving more weight to their arguments than the Afghan and Iraq wars combined. Could this be an epoch for Islamists to finally get traction in the Muslim world?”

It’s been said before, but this is exactly the same logic behind, “stop talking or I’ll hit you again.” It’s nothing short of, “do what I want you to do or I’ll get violent!” It is horrendously insulting and is bullying at its worst. America has the right, as a sovereign nation, to protects its own borders. The government of every nation has the right, and the obligation (there is very little I believe the government should do; this is one of them), to protect its own citizens. That means not allowing in people from areas that pose a significant threat to the population and the culture.

Using the actions of Donald Trump, which are nothing more than the protection of his own citizens, as a means of giving Islamists legitimacy, even if it’s just asking a seemingly innocent question (it’s obvious what he is trying to imply here), is unforgivable. This is especially true given what Donald Trump also did in conjunction with the ban, something that was reported, but to nowhere near the extent of the ban itself. This is not surprising, as it completely vindicates Trump in every way and, as Stefan Molyneux rightly puts in his fantastic presentation, could well have saved Western Civilisation.

I speak of course of the phone call Donald Trump made to Saudi Arabia and UAE that saw them agree to set up, and presumably fund, refugee safe zones in both Syria and Yemen.

It means that Middle Eastern refugees currently in the West can now be safely returned home. After all, the whole point of taking in refugees is to protect them until it is safe for them to return home, right? That’s the whole point of the refugee program, right? It’s not to permanently resettle them here so that they can become a large left-wing voting bloc, right?

This also means the Middle East will actually have to solve its own problems, rather than just sending people to the West in the hopes that we solve it for them. There is nothing like necessity to get peoples to act together. It is the mother of all invention after all.

Of course, when the Left have commented on the safe zones, they simply scoff; Michael Hughes from the Huffington Post states:

Oh, it was “predictable” that they would back safe-zones was it? I mean, why wouldn’t they? It’s not like this means they might actually have to solve their own problems now. I mean, it’s like, totally, because they just want more terrorists to kill more innocent people. These are all going to be totally free as well of course, stuff doesn’t cost money does it…?

Yeah, I think this guy may have missed the whole point of the “safe zone” part. It’s always the same argument from these people. “Don’t do that! It will create more terrorists!” Yet they never seemed to complain when Obama was dropping bombs on the Middle East and actually creating more terrorists. They also never seem to be critical of Islam, which literally tells its followers to kill anyone who doesn’t “believe”. It’s always the fault of the West, more specifically, those in the West who are not Leftists.

At the end of the day, nothing that anyone on the left says in opposition to Donald Trump holds any weight whatsoever. They completely destroyed their own credibility in the months leading up to his victory with their shameless barracking against him. The fact that he won, despite an almost unanimously hostile mainstream media, should have been a huge wakeup call, yet somehow they have not picked this up. Instead they chose to double down on their own blind dogma.

Not to worry: Trump doesn’t care, nor do those who wish to see the Judeo-Christian values, that created the West, continue to thrive. I, for one, am not complaining about their lack of self-reflection. It’s certainly giving me more than enough to write about. The mainstream media can continue their long, slow, death, and the world will be better for it. Meanwhile the New Media keeps getting stronger, more popular and its influence continues to grow.