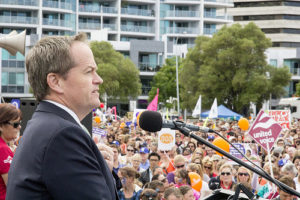 Is it me, or does it look increasingly likely that Parliament will now bypass the people and pass a gay marriage law without our consent? Denying us the plebiscite seems like it was always about ramming a vote through Parliament once the ALP take power again. I wouldn’t even be surprised if Malcolm Turnbull passes the law before he gets unceremoniously turfed from power.

When I heard about the plan for a plebiscite on this issue, I was all in favour of it. Not just because the Left were up in arms at giving people a vote, claiming that the polls are all in favour of it so there was “no point” (if the polls are so in favour, what have they got to worry about?). But also because this is an issue that goes to the core of our society: the family unit. Every single person in the country should have a direct say on such a fundamental issue within our society. We have a right to be heard on this issue.

Personally, I am neutral on this debate from a purely yes or no point of view. On one hand, I think two individuals, whether gay or straight, should have the right to be married; on the other hand, marriage has always been between a man and a woman, and it is fundamental to our society and our culture. As Dinesh D’Souza once stated (paraphrased), “if you see a fence in a field but don’t know what it’s for, is it a good idea to knock it down?”

My issue is with the fact that I absolutely despise the way pro-gay marriage advocates push it on us. It is less about two people in love getting married, more about shoving the regressive agenda down our throats. I was fully willing to accept the result of the vote regardless of the outcome, but they couldn’t even let us have a vote on the issue. I guess we, the people, might not vote the way they want, so we just can’t be trusted to have a say. It seems those in favour of gay marriage (now called “marriage equality” in a blindingly obvious attempt at Orwellian spin), are more interested in telling us what to think, than asking us how we think already.

If an individual is against same-sex marriage, it is their right to be against it. They should not be demonised for this view, just as those who are in favour of it should not be demonised for this view. To see perfectly what this issue is really about, all you need to do is know what the Left do when confronted with someone who disagrees with them on it.

When “Sweet Cakes” in Portland, USA, refused to bake a cake for a gay wedding, they were harassed, hounded and bullied for nothing more than exercising their religious and personal choice. Eventually the shop went out of business after being sued and ordered to pay $135,000 in fines and damages.

This is a crime against natural justice in every possible way. What right does anyone have to demand that a business serve them? What right does any individual have to force someone to act against their own religious beliefs? What kind of sick and twisted “human being” would send an honest business bankrupt simply because they don’t like the views of the owners?

If this gay couple couldn’t get a cake made at this cake shop, they could easily have gone down the road and found another shop. It is their natural right as autonomous human individuals to not bake a cake for a gay couple if they choose not to. It is any business’ right to refuse service to any individual for any reason they wish. If they refuse to take a customer’s money, they suffer the consequences of the market, and the market doesn’t care whom you choose to sleep with. The only thing the market cares about is money, and money does not discriminate against anyone.

What right does the government have to force people to serve any customer? Forcing people to act against their own good conscience is immoral, to say the least. The market would have rewarded the shops that did bake the cake and punished those that didn’t. This is basic economics; there was no need for the state to forcefully intervene.

Does anyone think there would be such an uproar if a Muslim cake shop refused to bake a cake for a gay wedding? Would this even make the news? Hah! Why am I even asking this question? Of course they wouldn’t care – they would almost certainly display their own hypocritical bigotry and fully support the Islamic shops right to choose.

The reason, again, is simple: this isn’t about gay marriage. It was never about gay marriage; it was never about “two people being in love having the right to choose”. It was always about shoving regressive views down our throats and telling us what to believe. Half of all Muslims in the UK think being gay should be illegal and not a single one thought that homosexuality was an acceptable lifestyle choice. Yet the Left refuse to call them out on this. Instead they are attacking and harassing Christians for exercising their right as free individuals to choose.

The slippery slope argument, in this case, is also more than valid. Muslims in Australia are already calling for polygamy to be legalised. Whilst the Libertarian in me believes in the right to choose, there are lots of issues with polygamy that have serious negative consequences for society. Not least of which, it leaves a large number of unmarried and partnerless men to roam around and potentially cause trouble.

Every time a woman marries a man, that is one less woman on the market. If a man marries three women, that means two men must go without a wife. This does not bode well for the society that permits it. It sows the seeds for large-scale civil unrest and violence. One man and one woman partnerships were instituted to stop just this issue. Large groups of unmarried men, with no children or prospect of ever passing on their genes, have very little reason to invest in, and buy into, wider society.

It is arguably a major cause of violence in the Islamic world; just look at all those single men flooding Europe. You could easily say that many of these men are moving to Europe in order to find themselves wives, or at least get sexual release in one way or another. I mean, it’s not like these men are sexually assaulting women en masse or anything…

Ultimately we deserve a vote on this issue. We deserve a say on same-sex marriage. I will not support any issue that is being used to shove a regressive agenda down my throat. I will not support gay marriage unless Australia has said “yes” to it. If Parliament were to legalise gay marriage, without giving the people a say, it would be the ultimate betrayal of trust. It would be a severe abuse of power and a middle finger to the Australian people.

If they do abuse their power in such a way, it will be well past time for our own “populist revolution”.