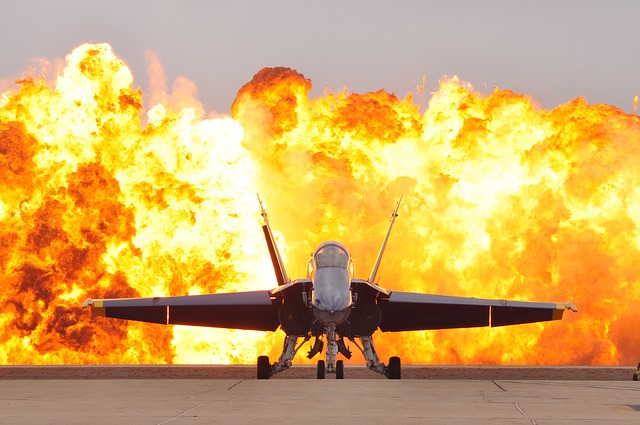 Editor’s note: Overnight, since the time this article was submitted to us, there has been a commando raid launched against Islamic terrorists in Yemen, authorised by President Trump. As Zeitungsdunkel explains, it is as much about a change in tone, a change in focus, which distinguishes the Trump administration’s approach from Obama’s thus far.

Not long after Mr Trump was finally allowed to drop the word ‘Elect’ from his name, a press release did the rounds spruking the exciting and productive first day of new Secretary of Defense, James ‘Mad Dog’ Mattis. ‘31 strikes against ISIS,’ the release said. ‘How’s that for Day One?’

‘About bloody time!’ said those who lean to the Right. ‘Finally some action!’

‘Get over yourself,’ countered those of the Middle, ‘Operation Inherent Resolve has been going on for years. Strikes against ISIS happen daily. This is nothing but a shameless attempt to link in with the Inauguration and make Mattis look good.’

Those of the Left said nothing, being too busy either mournfully stroking their Obama dolls or banning the wrong type of ‘Women’s Groups’ from joining their latest protest. They had no time to discuss press releases. They had limos to smash.

So with the Left off watching Madonna make a fool of herself, the Right and the Centre were left to shout abuse at each other in the forums and in this age of Fake News and Snowflakes, who are we to believe? Well, here at XYZ we believe if you can’t discuss a topic like adults, at least attempt to act like a teenager for an hour or so and do your homework.

Fortunately for our assignment this is the 21st century and even Operation Inherent Resolve has its own website. This contains, among other items of varying interest, PDF press releases summarising the daily bombing activities of coalition forces all the way back to January 2015. They are, if we can be honest, mildly dry reading, sticking to a set format. Rest assured that no thesauruses were harmed in the making of any of these reports, but also rest assured they do exist and are freely available to the public.

They do, however, suffer a bit with their bluntness. A strike, should one read to the end of the releases where these things are explained, is defined as an attack against a single target. It does not reflect the size or importance of the target, exactly how many weapons were dropped, or how many aircraft were involved. So, and this is important for later analysis, not all strikes are equal in terms of effort deployed.

A casual read will also reveal that not all targets engaged are equal either. References can be found to trucks, artillery pieces and ‘tactical units’. What’s a tactical unit? The formal Operation Inherent Resolve approved definition isn’t readily available but your author is willing to hazard an educated guess that it could be only a couple of men with personal weapons. While all targets are no doubt valid targets, we also need to keep in mind that real life isn’t Hollywood and not every bomb dropped is going to destroy the death star.

The disclaimer being made here is that our press releases are not score cards and cannot be simply used for an apple to apple comparison. Having said that, let us at least dip our toes into the mass of numbers and see what we can determine. By the time of writing, Mr Trump has been sworn in for over a week. The claim being made is that under Mattis the gloves have come off and we can only expect the tempo of anti ISIS operations to continue. So let us compare the eight days before Inauguration with the eight days after.

Hmmm, okay, all a bit colourless. Let’s look at this time last year as well.

Yeap, exciting stuff, and if we could only graph these numbers and superimpose a scary looking hockey stick we might be able to board a darn fine gravy train. Apart from that, basically the naysayer’s argument of ‘So what?’ does hold a reasonable bit of water. Sure, there is an impressive peak of 42 strikes on January 23rd, but it is then immediately followed by a slump back down to 19. Yes, our sample size is only eight days, but there is no real indication that Mattis has stepped into his new job and instantly demanded to see more strikes reports across his desk every morning, and to be blunt, nor should he.

Military actions are not games. There is no score, and no KPIs.

Racking up massive amounts of strikes is going to mean little if they are strikes against the wrong targets or if the forces of freedom are not in a position to take advantage of the situation.

So, does that mean the original press release of 31 strikes on Mattis’ first day was a lie? Should those of the Right pull their heads back in and go back to doing what their Culturally Elite Superiors tell them to do?

Well, no. Part of the nay argument was that 31 strikes was a meaningless number in the scope of the ongoing Operation Inherent Resolve and the entire press release was just there to draw attention to the new Mad Dog in town.

Which was exactly the point.

The 31 strikes were never going to instantly win the war. Indeed, given that the press release dated 20th January was a document reporting on activities from the day before, it seems extremely possible that the infamous 31 wasn’t even Mattis’ first day at all.

The point is that the Trump press wants to talk about the war. The fact that operations against ISIS pre-date Trump isn’t the discussion point here, it is the fact that – gasp! – bombing Islamics is now something the US Government openly wants to draw to your attention.

What happens in the future will happen in the future, but for the time being at least, Trump and Mattis seem to be not turning a blind eye to the elephant in the room, but instead intend to bomb it.