Last Thursday was Australia Day. For my international readers, the date falls on the day that British Captain Arthur Phillip landed in Sydney harbor with a rat-tag bunch of marines and convicts and established a colony to which all the nasty elements that his lords and masters couldn’t be bothered executing could be sent. To celebrate this occasion I did the very Australian thing – a barbeque with lots of tasty dead animal flesh, loads of cold frosty beers, and a game of cricket. Tally-ho, old boy!

But others in Australia do not celebrate this important day. They seethe with resentment. They go amongst the Aborigines to stir up trouble. These people are referred to as the ‘black arm-band brigade’ and the label they bestow on our celebration is ‘invasion day’.

Writing in The Australian newspaper on the day itself, former conservative politician Ian Macfarlane argued that the national holiday had become too divisive and we should change the date to ‘make everyone happy’.

“Why do I think we should we change the date from January 26? Simple. Because not all of us feel the same way about that date.

“This is not about pleasing people, it is about uniting people. It’s about healing a wound, drawing a line, getting on with the really important issues facing our indigenous communities.”

Macfarlane’s great mistake is to assume that if we give in to the demands of these treasonous dogs, then we will make everyone happy. First of all, nothing will make this lot happy – their intention is to destroy Western civilization and Australia with it, one step at a time. Secondly, adults understand that we do not make decisions to make everyone happy. Making everyone happy is impossible. There will always be a small amount of drop-kicks who like nothing more than to stir up trouble. You don’t stop them having their fun by giving them what they want. It just drives them to seek more and more concessions. They never want to be united. Unity is the last thing that this lot wants.

There is also no wound to heal. This so-called wound exists only in the small and undeveloped minds of the aforementioned trouble makers. Unfortunately, as Macfarlane demonstrates, other minds that are only barely more developed have trouble understanding these issues. They think that by buying into the bulls— then they will achieve ‘great healing’ and make everyone love each other. The reality, of course, will be the opposite. 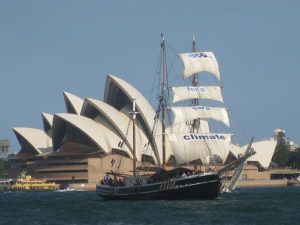 When Captain Phillip landed, he found no army waiting for him to defeat. There was not a single shred of evidence of any civilization to be found among the scraggy wattle trees and bush scrub. Contrary to Macfarlane’s assertions of ‘terrible wrongdoings’ being done against the Aboriginal inhabitants, the British generally treated them with kindness and welcomed them into their camps and then towns.

The Aborigines had been literally living in the stone age. The day that captain Phillip’s fleet landed was the beginning of their being lifted out of an existence that nobody else in their right mind would want to return to. Theirs was no banquet of lazy idyl. Their existed no so-called ‘welcome to country’ ceremonies. If an Aboriginal of the tribe on one side of Sydney harbor was so unfortunate as to wander into the area of the tribe living on the other side then his life would be swiftly terminated. What would cause him to make such a grave error was the continual hunger that gnawed their scraggy bodies. A hunger that drove them to wrench tree saplings from the ground in a scramble to locate a handful of grubs. True environmentalists they.

Far from believing the lies of anarchist ratbags, Australian Aborigines should be falling on their knees in gratitude on this great day. It is the day they were liberated from an age that the rest of the world had taken 40,000 years from which to drag themselves. And what did they think would have been the result if the British had not arrived? Do they really believe that they would still be living unmolested and undiscovered in their stone age existence? Perhaps today’s satellites orbiting the earth would just miss this rather large continent perched below Asia.

Heaven help the Aborigines if the Spanish had turned up instead. We all know their track record in the New World. As soon as gold was discovered in Ballarat in eastern Victoria, the Aborigines would have been turned into slaves and sent in to dig the precious metal from the hard earth. In South America’s fabled ‘silver mountain,’ the life expectancy of a local inhabitant was less than a week from when they were first sent into the mine in chains under their Spanish overlords.

Similar arguments could be made for the French and the Dutch. I don’t think that things would have been any better either if the Japanese had managed to get their act together and establish their first colony.

Australia Day is not a day for uniting Australians. It is a day for those who are mature enough to understand and honest enough to acknowledge that this was the moment when a new nation began to form, with no war or conquest and no enslavement of the indigenous inhabitants. A nation that for over two hundred years since has suffered no internal strife or civil war. We would do well to continue this fine state of affairs by not giving in to these extreme elements.