Just one of many the many ironies about fake eagerly capitulating and colluding mainstream media pointing the finger at alternate media is the baseless assertion that we are “dangerous”.

I’ve yet to see Infowars, Brietbart, or XYZ, for that matter, aggressively antagonise a foreign superpower for no justifiable reason. Alex Jones loves his guns, but he’s a veritable peacenik compared to CNN’s Syria and Crimea correspondents.

If I or anyone from the XYZ stable were to write a completely baseless article covering stock standard Australian Navy exercises in a needlessly provocative manner, like, for example, “Australian Navy Sends Message to Indonesia in Torres Strait”, our editors would scrap it in a heartbeat on the grounds that it was irresponsible sabre rattling. International diplomacy exists for a reason, and it isn’t the job of media outlets to deliberately increase tensions with foreign powers to suit their own agenda.

Unfortunately, the Clinton News Network seem to have no such scruples. This headline blared from their homepage recently: 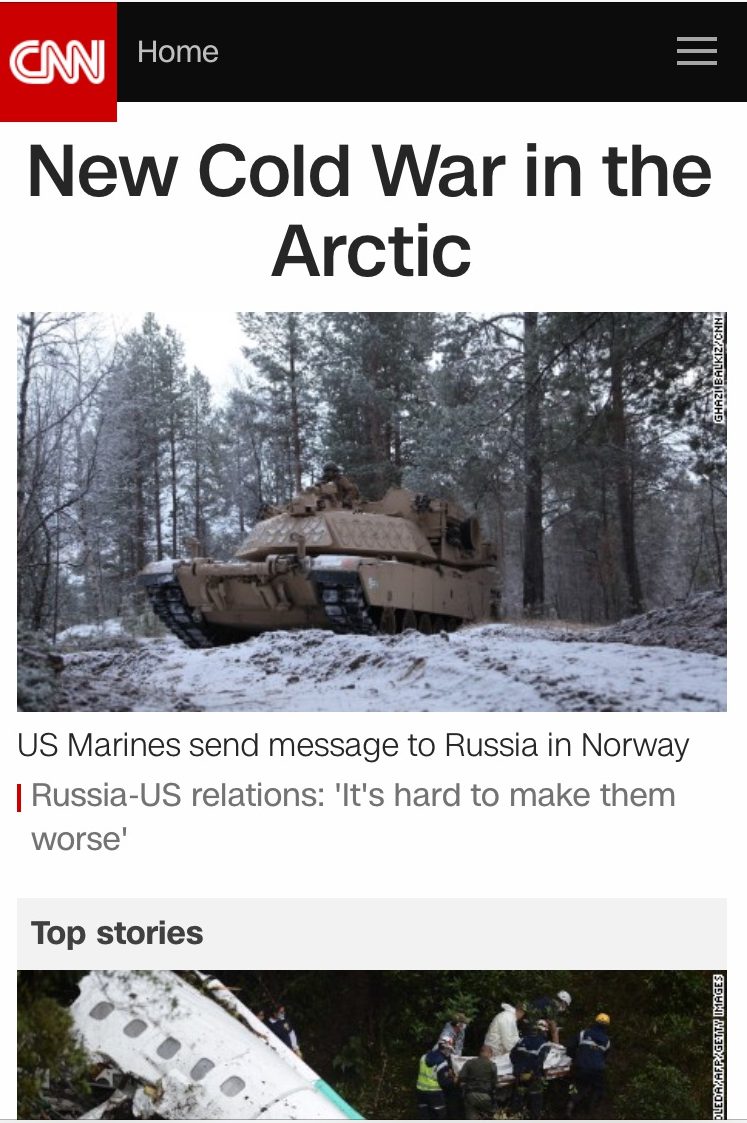 U.S. Marines Send Message to Russia in Norway. Really? The same news organisation that steadfastly refuses to report critically on the security risk that large numbers of refugees pose, for fear that they’ll have their feelings hurt or become instantly radicalised (which kind of reinforces our concerns) shows no such restraint when reporting about a superpower with nuclear warfare capabilities.

It defies logic that these people have the audacity to point the finger at alternate media as “dangerous” or “irresponsible” when they are behaving like the kid in the school-yard who blusters that their old man “can beat the s— out of your old man”. Doing so completely undermines the aspirations of “Daddy” (as Milo affectionately calls the President-elect) who seemingly plans to negotiate a peaceful resolution with Russia, all the while wishing the hawkish children at CNN and other sabre rattling Elitist Media outlets would just remain quiet and let the adults talk.

Obviously these provocative warmongering media outlets have either gone so far down the rabbit hole to appease the Obama administration, and their posturing surrounding the situation in Syria and the Crimea, that they are oblivious to the fact that they are poking a Russian Bear, or even more disturbingly, may have a vested interest in who gets the lion’s share of natural gas revenue in Europe and the Middle East or other benefits.

Time Warner, the parent company of CNN, has no natural resource assets that would indicate a vested interest in what happens in these turbulent regions, however AT&T announced plans to purchase the media behemoth back in October.

Perhaps this bizarre, hawkish media coverage is all as simple as who gets to place a Samsung Galaxy or iPhone in the hands of weary Syrians, Eastern Europeans, and Ukrainians once the dust settles. It isn’t beyond the realm of possibility that a growing media and telecommunications empire might see business opportunities barracking for a proxy war with Russia.

There’s certainly no compelling argument to be made for fair and balanced coverage by CNN with no reward at the end. Draw your own conclusions.