I flew up to Brisbane this week for a work meeting, which went well. I caught a Virgin Australia flight up there, and I was leafing through the in-flight magazine, for want of anything better to do. Desperate to read anything of interest in its putrid pages, I turned to the editorial. It was written by the CEO and MD John Borghetti and concerned the White Ribbon event which was held a few days ago. I hadn’t heard about it before, but the editorial soon got my interest, and not in a good way.

“The White Ribbon event is the world’s largest movement of men working to end men’s violence against women, promote gender equality, healthy relationships, and a new vision of masculinity.” 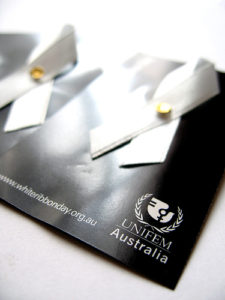 I looked up the event’s Australian website to see just how bad it was. From their diversity and inclusion page:

“Australia is one of the most diverse countries in the world. Diversity and inclusion is an important part of Australian way of life.”

Here we have progressive ideology stated as bare fact. Mind you, the fact that they have such a thing as a diversity and inclusion page tells you everything that you need to know.

I had been wondering what the insipid people on my Facebook feed had been banging on about the last few days. Apparently this White Ribbon lot have a pledge. And they want men to publicly take the pledge. The Virgin CEO also exhorted men to take the pledge. To make it easier Virgin had printed the pledge on the back of their boarding passes. Here is the pledge in all its glory:

“I will stand up, speak out and act to prevent men’s violence against women. This is my oath.”

Presumably you cannot do this if you’re sitting down, which is a mite tricky when traveling on a plane. It all sounds so nice and good and wholesome, doesn’t it. What’s the harm in taking this pledge? You’d have to be a really bad person not to take this pledge. Why, you’d have to be someone who perpetrates violence against women! Sacre bleu!

Well, consider me someone who sticks their pledge as far up their backsides as humanly possible. In other words, take your pledge and shove it. This pledge and event is not about ending male violence against women. It is about getting men to fall into line and accept that as men they are inherently bad unless they publicly convert to renouncing their vileness. And it is about further pedestalising women as the keepers of wisdom and inherent goodness and of them being above reproach.

We need a term to describe men who are so quick to sell out their own biological sex in the vain hope that by virtue signaling their supposed goodness, then they just might get lucky with the quirky progressive chick with blue hair. Cuckservative has been widely adopted for conservatives who sold out their core base so as to further their own personal interests. This accurately describes men such as the Virgin Australia CEO. All we need is a slightly different version so as to distinguish the two groups.

I vote for the simple term cuck. Only cucks would sign this pledge. Only cucks would debase their own masculinity in an attempt to curry favour with the lunatic left. And as for defining a new vision of masculinity, well, we’re certainly not going to leave that up to a bunch of cucks – men who never knew what masculinity was to begin with.

UPDATE: We have improved and refined the term. At this point it is now, cuckvirgin.

This article was originally published on 30/11/2016 at www.pushingrubberdownhill.com where Adam Piggott writes regularly and brilliantly.