A quick quiz for those playing at home:

What is black, costs Australia a lot of money, and Andrew Bolt obsesses over constantly?
If you retorted ‘Submarines’ you would be absolutely correct.

If you answered anything else, Gillian Triggs, or possibly a sub editor, is very cross at you. 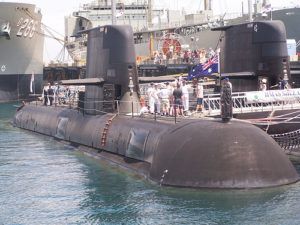 Yes, over on News Limited, Andrew Bolt has managed to get another cliche up his metaphor as he obsesses over the ‘50 years’ Malcolm Turnbull linked to the Adelaide based submarine project. What Lord Turnbull (in the grace of God) actually said in his own clear and concise manner was that there would be a supported submarine industry at the Canoe Factory for 50 years. This works out loosely to 25 years of sequentially building the 12 boats followed by another 25 years of maintaining, upgrading and finally decommissioning the last of those puppies. After that date we will of course all be dead from Global Warming(tm) thanks to that nasty Tony Abbott and no one will care.

Now, this 50 Years time line really shouldn’t be a difficult concept. The Collins boats were built between 1990 and 2003 – a thirteen year period – and now, 13 years later, ASC are still maintaining and upgrading them. True, ASC are maintaining and upgrading them at openly debated levels of professional skill and efficiency, but it has clearly not taken over 26 years for the last of the six boats to be delivered.

Andrew Bolt however is convinced he has pinned Turnbull on this one and the relatively recent announcement that Israel is purchasing three submarines from Germany has given him a new chance to blog obsess over this mis-fact all over again.

The argument goes a lot like this. Israel is paying $1.3 billion (US), not $50 billion (AUST), and having them built in Germany, not Adelaide, therefore Turnbull is an idiot and this submarine should be in all the media constantly.

Ignoring for a moment that Turnbull is not so much an idiot as a vain, ego driven megalomaniac who refuses to take responsibility for his own massive failings as both a person and a leader, we have a few rather large apples to oranges items here.

First, 12 boats against 3, a fact that is easy to forget when you are simply throwing around the overall total price. True the nominal unit costs of the boats is still heavily in the Israel/German favour, but let us look at some of the other considerations as well.

Second point, the Israeli boats are going to be smaller then ours. How much smaller isn’t defined. Both the new Australian and the new Israeli boats are described as being ‘larger’ then the proceeding Collins and Dolphins but given that the Collins class is already significantly bigger then the existing Israeli boats it is difficult to believe the situation is going to change. With the exception of beer guts and national debts, bigger is basically better. A bigger submarine can carry more, stay at sea longer and has more flexibility. More expensive? Yes that is true as well but again we are talking apples to oranges in the same way your little 3-door hatchback is going to have a different price and list of abilities to your seven seat urban 4WD.

The next question we need to consider in this comparison is just how much submarine are the Israelis getting for their money. This isn’t made remotely clear in the vague linked article Mr Bolt is using for his latest ‘I Hate Australian Shipyards’ blog rant. What does need to be understood about current military equipment is that they are stuffed to the bulkheads with electronics, all of which is vitally mission critical and normally, insanely expensive. Israel’s existing submarines are, as much as is publicly disclosed, fitted with systems supplied by their own in-house defence companies. There is little reason to believe these new boats will be any different, which raises the question as to if the listed price tag is for a fully fitted out boat or just the mechanical parts. Remember, the often quoted $50 billion for the Australian boats is for the entire project. If the German built boats are not combat ready when handed over, then the $1.3 billion figure may just be the start of Tel Aviv’s final invoice.

While we are talking about the submarines, it should be remembered that the Germans are just building the boats. Much like the people who built your home 10 years ago are going to expect more money when you suddenly decide to renovate your bathroom, the German shipyard isn’t going to be doing any midlife upgrades to these submarines under this original price tag. How much of the Australian project costs is going to cover upgrades is open to reading the fine print. New and expensive equipment that probably hasn’t been invented yet are probably going to involve new and expensive price tags, but since the project gives Australia a guaranteed 50 years of submarine industry in the Blackout State, we at least already know who is going to install it.

This brings us to the other big point in the argument of local vs overseas purchase – who does the maintaining? If the answer is ‘Someone Else’ then the matching location is more than likely ‘Somewhere Else’ and you have to start asking just how much you trust those foreign types to give you your expensive war machines back again. Possession is nine tenths and international arms sanctions do happen. Never seeing your warship again should diplomatic channels really fall to bits can happen; just ask Iran who in the 70’s paid good money to make the USN four destroyers bigger.

Unlike Israel, Australia is an island. Israel’s need for a strong navy is secondary to the fact that any one of their land neighbours could attempt to drive tanks across the border tomorrow. Australia on the other hemisphere, has a lot more complex (read ‘bigger’ and ‘more filled with water’) list of problems to deal with. While claiming that submarines are ‘vital’ for Australia’s defence is always an open argument, the loss of a submarine by having it seized in a foreign shipyard is proportionally a greater loss to Australia’s military abilities than a similar situation with Israel.

So, risk having a major warship seized, or pay extra to ensure our maintenance and upgrades never have to leave the country? The government has spent the money. Commentators – clearly – have not universally agreed on this, but they should at least have the courage of their word counts to bother to mention what the risk under consideration was, as well as the full implications, in the first place.

While we are talking about topics not discussed in the first place, shall we briefly consider another point about Israel? As mentioned briefly earlier, Israel has a significantly large native defence industry. The list of military equipment and systems Israel designs and makes itself is long, and the reader is encouraged to google it for themselves should they desire greater examples. The point being made here is that it is difficult to play the ‘look at the clever Israelis’ card over their overseas submarine builds, when you are shamelessly ignoring the ‘wouldn’t it be cheaper to just buy tanks/missiles/rifles from America?’ discussion. If Israel is our new role model for all things Defence, then should we not be designing and building even more equipment locally and not the other way around?

There are questions concerning the way defence is run in Australia. Payne has shown little beyond being progressively the first female in that position and Pyne, having decided that Education was going to be too filled with screaming students doing Arts Degrees in Trigger Warnings, got himself switched to the more profile and vote-friendly Defence Industries desk. ASC itself has a reputation for mismanagement that needs to be addressed and the entire question of South Australia’s rubbish power abilities needs to be taken into consideration as well.

What doesn’t need to be constantly floated around by people like Andrew Bolt is the entire ‘50 Year’ myth. It’s not true. It never was. By continuing to lead with this every time Bolt thinks he has a needle to stick into Turnbull, Bolt is instead building his own Tim Flannery ‘The Rain that Falls’ legacy.

So there you go Andrew.

You have been warned.