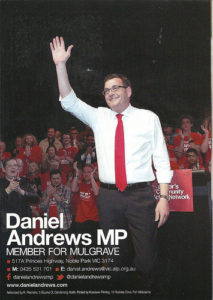 It is time for the return of one of The XYZ’s most popular segments, Wally of the Week, named after everybody’s favourite Muslim Apologist, Waleed Aly (TM). Daniel Andrews today sent a letter to the Australian Prime Minister, asking him to forego the promised plebiscite on same-sex marriage, and instead introduce a joint bill in parliament to alter the Marriage Act within 100 days, and allowing a free vote for government MP’s.

There was, in the words of The XYZ’s own Grumpy Motorist, “so much stupid” in the letter that it is difficult to finish. But in the spirit of taking one for the team (as they say) this XYZ editor has been prepared to wallow through, and highlight several clangers.

Firstly, the term “marriage equality” is a deliberately misleading term. If the “one group of Australians” in the statement “one group of Australians should be considered equal under law” does not include multiple partner relationships, relationships between those who are related, or any other combination or permutation of consenting adults, it is not marriage “equality.”

Secondly, what we have here is a call to openly break an election promise.

Thirdly, the argument that “This plebiscite will hurt people. It will legitimise a hateful debate which will subject LGBTI Australians to publicly funded slurs and denigration,” is an argument that to simply oppose same-sex marriage, for whatever reason, is hateful, is a slur and denigration of another. (Watch out 18C…) By this definition, current Australian law is hateful, etc. This is no way to hold a debate; preemptively dismiss anything your opponent might say as bigoted and beyond any semblance of reasonableness. But then again, that is how the left operates. 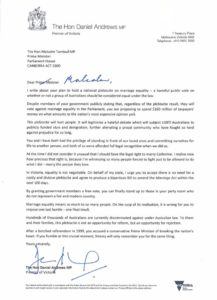 Fourth, and this is one that might slip past most. Daniel Andrews states that, “Hundreds of thousands of Australians are currently discriminated against under Australian law.” One of the apocryphal statistics that is often cited when discussing issues affecting homosexuals is that they comprise roughly 10% of the population. This massive exaggeration is often cited as an argument in itself in favour of same-sex marriage. However, the real proportion is consistently shown by surveys to be around 2%. Andrews’ estimation of “hundreds of thousands of Australians” rather than “millions” would imply that he accepts this much lower estimate.

Finally, Andrews’ claim that “this plebiscite is not an opportunity for reform, but an opportunity for rejection,” whether he meant it literally or figuratively, reveals the motive behind opposition to the plebiscite – fear of the proof that the oft repeated figure of 70% support in the Australian community for same-sex marriage, is akin to the so-called 97% “consensus” on climate change: i.e. completely false.  We should note that Andrews’ implicit threat, contained in his final paragraph, suggests that the left is already prepared for defeat and is preparing their excuse, and scapegoat, in advance.

At its heart, opposition to the plebiscite on same-sex marriage is anti-democratic. It opposes direct democracy. It opposes the idea that a government should follow through with its election promises. And it mirrors the way the the debate on same-sex marriage has been conducted by the left; attempting to shut down and shout down any disagreement, indeed any attempt at debate, on the grounds that it is inherently bigoted and homophobic.

As I have said before, I really couldn’t care less about this, and I suspect a lot of Australians feel the same. But this is being made into such a divisive issue because of the anti-democratic way the left have gone about it.

As such, Daniel Andrews has well and truly earned himself The XYZ Wally of the Week.