A small congregation had gathered for the morning Mass which was being celebrated by Fr Jacques Hamel, the parish’s 85 year old auxiliary priest. The jihadis, armed with knives, a handgun and a fa 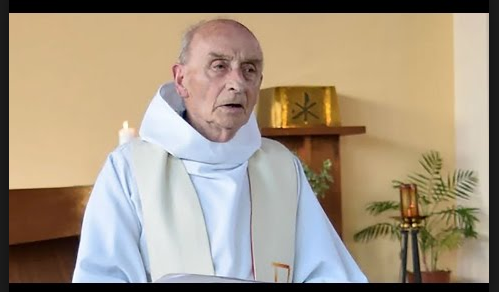 ke bomb, took Fr Hamel, two nuns and two other members of the congregation hostage. The Islamist attackers then attempted to make the elderly priest to kneel down, but he refused. At this point, the jihadis forced Fr Hamel to the ground and slit his throat, screaming “Allahu akbar” as the old priest died.

Fr Hamel has been acclaimed by many as a Christian martyr, killed for refusing to kneel and submit before his Islamist terrorisers.

Unlike the elderly French priest, many in the West have already submitted to Islamism, whether it be out of fear, ignorance or cowardice. Despite the ever increasing prevalence of Islamic terrorism, many continue to dismiss or excuse the actions of Muslims, and refuse to acknowledge the violent, oppressive and expansionist teachings of Islam’s founder, Mohammed, and the reality of Islamic political ideology.

For non-Muslims who live under Islamic rule, there are usually just two choices, and sometimes a third. They are:

Fr Jacques Hamel refused to kneel and submit to Islam, and it cost him his life. But the alternatives are worse, as the history of Islam and Islamic nations testify.

The West is now at a crossroad. Will we as a civilisation refuse to kneel, as Fr Hamel did, or will we submit to Islam and its sharia? The decision is ours to make.