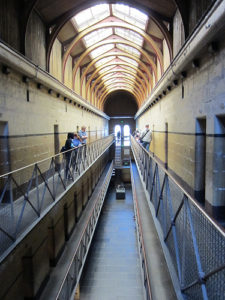 Before legislation on the above subject is formulated, one should look closely at omissions from the current debate about extended incarceration of convicted terrorists in Australian Gaols, if they are unreformed at the end of their prescribed sentence.

While many could be in agreement with allowing the court system to extend a prison sentence if it is justified in order to protect our society, nothing has been raised about some of the losses that prisoners should be subjected to during their incarceration, or, for that matter, the “rights and privileges” that the convicted person seems to still enjoy under the mantra of, “we must respect their human rights”!

One must remember that there is an unwritten compact in the modern nation state, whereby the nation state guarantees to protect its citizens in return for their loyalty and forfeiture of individual weapons (except of course in America).

My first thought was that, “if you need to be removed from society for its protection, then you have no ‘rights’ as these are forfeited to the criminal justice system until such time as you have earned them back”.

Typically, the custodial system of punishment for a crime committed against civil society involves both a retributive and a restorative function, if that person is to be returned to full privileges enjoyed by members of civil society. The retributive function of imprisonment involves removal of the offender’s privilege of freedom, and incarceration restricts that freedom of both movement and association of friends, family and normal law abiding society.

The restorative function of incarceration, in previous times, involved the prisoner being compelled to attend Christian religious services on Sundays, access to a Bible, together with chaplaincy intervention and programs designed to train the offender into right-minded thinking of their obligations to other members of society. In times past this was a period of penitence, and the place of incarceration was known as a penitentiary.

What seems to have become fashionable in the current time, is that those who offend gravely against civil society still have “rights”, and I call your attention to the police commander in the Lindt siege giving the lame excuse that he did not order a breaching of the cafe because he was concerned about infringing the “rights” of the terrorist who had a gun at the head of one of the hostages.

These rights of a serious offender, or convicted terrorist, seem now to include access to a theological text such as the Qur’an and the Haddiths, plus visits from a spiritual advisor of their choice, even if he is an extremist preacher of Islam from a local radical mosque. One really is at a loss to understand how a serious terrorist offender is to be reformed if he still has access to material that was instrumental in guiding them down the path of violence and terror against civil society, which is spelled out in minute detail in the texts listed above?? Yes, the mind boggles!!

If the forthcoming legislation is to be agreed to by all states and territories, then the states must either reform their prison system to remove the logical absurdity just described, or the Commonwealth Legislation will need to prescribe the removal of rights and privileges that are not conducive to the offender being rehabilitated.

Now, we have the additional problem of getting bipartisan agreement in the federal sphere, when the ALP have as their shadow Attorney General a long streak of left-wing legal misery from South Australia, whose cultured dulcet tones will no doubt put us all to sleep with irrelevancies on the subject.

Following on from here, if we have a conference chaired by the Commonwealth, with all states participating, this in turn will raise the spectre of specifically pleasing one of those state premiers, “a hunchback socialist who would seek to transform the great state of Victoria into a satellite state of the USSR”. Would he, or the secretary of the United Fire-fighters Union, sign up to this legislation which is against their very atheist neo Marxist / deconstructive agenda?. This agenda is intent on destroying all norms of civil life that may be attributed to the Judeo-Christian tradition.

If all this was not enough to dampen one’s faith in intelligent and rational thought by the political classes, we have the spectre of these incorrigible, hardened and violent terrorists being housed in close proximity to the normal criminal classes doing time for their stupidity, and being caught. This can only exacerbate the problem of additional terrorist recruitment amongst the criminal classes of society.

Failing this, we have probably the better solution to the problems listed above. It would be a cheaper option, guaranteed to excise the cancer of terrorist violence whilst at the same time providing a lurking deterrent for those who are contemplating going down the path of terrorist adventure.

It is called CAPITAL PUNISHMENT – and it certainly removes evil from the land.