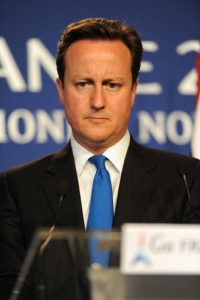 In the wake of today’s decision by the people of Great Britain to leave the European Union, David Cameron has announced that he will resign his post as Prime Minister of Great Britain in October, in an emotional, but graceful speech on the Steps of No. 10 Downing Street.  He has failed in his attempt to keep Great Britain in the EU, and as the leader of his nation, as the leader of push to remain in the EU, he bears the brunt of responsibility for the failure of the campaign.  It is sensible that as Great Britain negotiates its exit from the EU, the negotiations are led by someone who believes that the course of action his country is taking is the right one.

As such, Cameron’s decision to quit as PM is proper, but it is also an example of duty, of principle, and of democracy at its very best.  British stock and British currency are currently taking the battering they were expected to.  For a Prime Minister to leave now would only add to this instability.  Cameron has put to rest any speculation as to his future from the outset, but has made it clear that he will serve his country for a limited period, to help steady the ship.

Given Cameron’s political career is finished, this is a noble decision.  Cameron knows he will effectively be a lame-duck Prime Minister for the next few months, but cares more about the future of his country than his own immediate interests.  It is an example of the strength of the democratic process in Great Britain, an example of the strength of commitment those entrusted to lead Great Britain have to that process, and an example of David Cameron’s commitment to, and love for, his country.

This is an exciting time for Great Britain, and the people of Europe.  Europe faces an existential crisis as great as any it has ever faced.  It is fitting that Great Britain should be the first nation of Europe to take a positive, definitive step to face this crisis, and fitting that it should do so democratically, and peacefully.