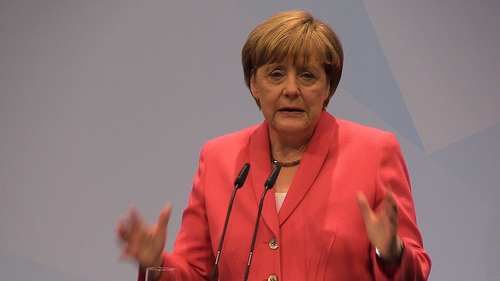 The manifest benefits of unrestrained migration and the multicultural utopia promised by progressives and socialists the world over continue to blossom in present day Germany. There was a time, no doubt, when young women could walk past the famous cathedral at Cologne, and to the railway station, without being groped, assaulted, and even in one alleged case raped. But that time has passed.

Now, young German women attempting this everyday routine are met by gangs of young men and subjected to a terrifying ordeal of groping touching, harassment, and worse. The victims were apparently mistaken in identifying the men responsible as being of North African and Arab appearance. The Chancellor, Angela Merkel “condemned the attacks” but “warned against hasty conclusions about the perpetrators.” By “hasty conclusions” she means immigrants can’t be responsible even if the perpetrators look like, well North African Arab immigrants. Take the blindfold off Frau Merkel.

It is not known how the actual victims, the young women groped, assaulted, harrassed, and worse, on the streets, in the middle of one of Germany’s largest cities, felt about their Chancellor’s strong show of support – for the perpetrators. Hopefully the women involved are not presently being charged with a hate speech crime for wilfully racially profiling those poor young immigrant men of North African and Arab appearance, who are, of course, the victims in this story. The Mayor of Cologne confirmed it, suggesting that women should adopt a “code of conduct” to prevent future assault. What did she have in mind – the hijab or burka?

Isn’t multiculturalism just wonderful! You might be able to get a good kebab down at Cologne railway station these days, but if you’re a young woman, you’re likely to be groped, fondled and harassed, or worse, on your way there.