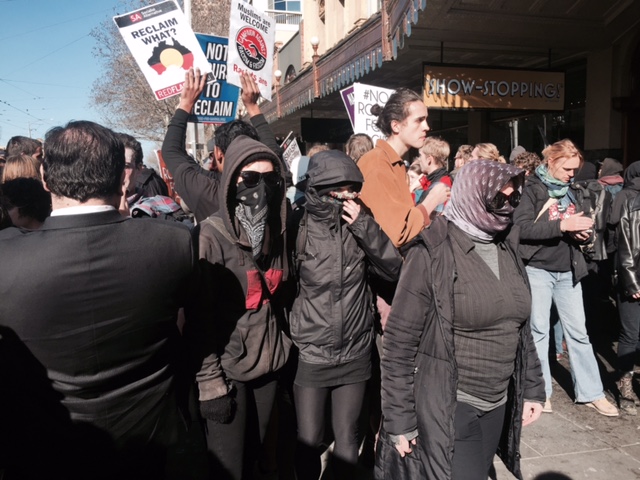 I was stunned to have read one of the most balanced articles I have ever happened to come across from the Sydney Morning Herald.

Today, Tim Elliot from the SMH actually reported on the violence of left wing protesters – violence which is commonplace at their demonstrations and counter demonstrations, but goes largely unreported. Elliot wrote:

“People regarded as being anti-Islam protesters have been set upon by members of a large anti-racism crowd numbering in the hundreds that has gathered to mark the 10th anniversary of the Cronulla riots.”

Among the leftist protesters were a “vocal minority called Antifa (anti-fascism) dressed in black with black face masks” and “have been abusing police, using megaphones.”

Elliot finally unmasks the true and underlying intentions of the left wing protesters for the Sydney Morning Herald’s readers to see. When asked about their confrontational tactics, Elliot reported an Antifa member stating: “peaceful confrontation is not going to work with these people. We have tried that in the past. We will not tolerate any fascism in our country.”

These people will not only tolerate but celebrate extreme ideologies like communism, anarchism and Islamism, but whatever they deem as “fascist” they have said peaceful engagement won’t work.

With the mask slipping away to reveal these clearly unpeacful intentions, can we trust that the left wing activists actually stand against things like racism and tyranny?

Do they actually support liberty, freedom of speech, freedom of conscience, and democracy? Or do they try and hide their violent and autocratic intentions behind a veil of slogans and political correctness?