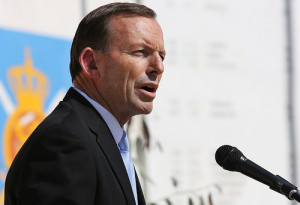 Tony Abbott has self-sabotaged his credentials as a hard-nosed, anti-islam conservative by writing a wishy-washy puff-piece for middle-of-the-road Sydney paper The Daily Telegraph. He has called on Australians to “reach out to “live and let live” muslims,” praised muslim leaders around the world for their efforts to reform islam, and encouraged us all to “talk to decent people who happen to be muslims.”

In arguing the case for “a concerted “hearts and minds” campaign against the versions of Islam that make excuses for terrorists,” and arguing that “most Muslims utterly reject terrorism,” he has damaged conservative efforts to tar all muslims with the same terror brush.

In showing concern that “Demonising islam generally or all muslims could bring on the “clash of civilisations” that academic Samuel Huntington feared two decades back and make “islam’s bloody borders” even more dangerous,” Abbott is demonstrating a disturbing lack of racism, and setting back our efforts to reinstate the White Australia Policy by at least a decade.

Perhaps most disturbing, because it is so subtly insidious, Abbott has lauded NWO leaders such as Obama and Turnbull, and has even praised muslim leaders such as President el-Sisi of Egypt – who repeats Abbott’s lie that Islam can be reformed; Prime Minister Najib of Malaysia – who has stated that ISIS is against islam; and the chairman of the Parramatta mosque in Sydney – for his patriotism!

Rather than condemning US President Obama for his policies which enable islamic terrorism, Abbott stated that “President Obama is now showing the will to win that’s needed for a safer world and he needs our support.” He has also endorsed his colleague, and the man who took his job, Malcolm Turnbull, saying “PM Turnbull is talking to our allies about what else we might do. This could include more RAAF support for the air campaign and allowing our soldiers to broaden their mission to help local forces.”

It is clear that Jewish agents have gotten to Tony Abbott. They have most likely murdered him, and made a clone human suit for their reptilian masters to wear and conduct doublespeak in his name.

The XYZ is in no doubt that this is the time to crack each others’ heads open, and feast on the goo inside.