Yesterday, the Grand Mufti of Australia, Dr Ibrahim Abu Mohammed “clarified” his earlier statements where he blamed the Paris terrorist attack on the West, racism and Islamophobia, and hit back at his critics by comparing himself Jesus.

Speaking through his interpreter on Sydney radio 2UE, the Grand Mufti said: 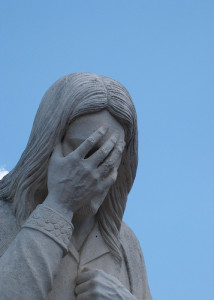 look at the messiah Jesus Christ as well, who was mocked by his people.”

Such was the surprise of the Mufti’s comparison of himself to the Son of God, that your Christian author practically blasphemed with an audible “J-sus Christ!” as well a few other choice words which are too obscene to repeat.

The Grand Mufti of Australia is hereby awarded with today’s XYZ ‘quote of the day’.

To conclude, I will leave you with another quote, which I would encourage the good Mufti to consider:

“He’s not the Messiah, he’s a very naughty boy!”