Obtaining a visa for the Kingdom of Saudi Arabia is not easy. Nor should it be. It is possible to enter the country as a religious pilgrim, if one is of the right religion of course. Foreign nationals who may be working in the Kingdom must have a sponsor, normally their employer, and there are stringent requirements and regulations around the granting of the visa. If you are knocked back, the advice of the Saudi foreign office is don’t bother trying again, you’re unlikely to be reconsidered. It’s very hard to get a tourist visa, if not a (Muslim) religious tourist, possible to get a visa for work purposes with conditions around living arrangements and conduct in public, and all but impossible to get permanent residency. And if you have an Israeli stamp anywhere in your Passport, don’t worry about bothering the Saudi foreign office, you haven’t got a snowflake’s chance in hell of getting in the country. If you were thinking of citizenship, think again, unless you are intending to convert to Islam and marry a Saudi citizen (of the opposite gender). Expat Focus advises:

“Foreign citizens are very rarely granted citizenship in Saudi Arabia. This is due to the strict limits placed on immigration in the country. For most people the only way to become a citizen is to marry a Saudi Arabian citizen, but this is no guarantee that citizenship status can be granted, particularly if the foreign national is not a Muslim. A person applying for citizenship will have to be prepared to give up their own nationality as dual nationality is not permitted in the country. Those who marry a Saudi citizen can later have their citizenship taken away if the marriage ends.”
http://www.expatfocus.com/expatriate-saudi-arabia-residency

In the light of the ongoing immigration debate in western nations, the United Nations demands that western countries accept thousands of Syrian refugees, and, of course, the Paris terror attacks, one is somewhat bemused to 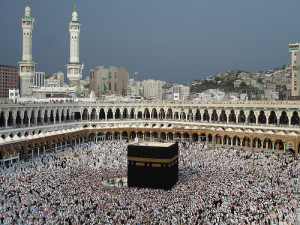 ask why it is that it’s perfectly okay for the Kingdom of Saudi Arabia to have very strict visa regulations, and to make it all but impossible for foreign nations to seek citizenship without first converting to Islam and marrying a Saudi citizen, but not okay for any western nation to behave in a similar way. If Britain, France, the United States, or Australia, wanted to introduce regulations whereby those of the Christian faith were prioritised for consideration for a visa, and ultimately for residency and / or citizenship, why the hell can’t they? Especially when the Kingdom of Saudi Arabia is considered a paragon of human rights by the same United Nations, who recently elected it chair of an important human rights council.
http://blog.unwatch.org/…/saudi-arabia-wins-bid-to-behead-…/

The answer is, we suspect, the Saudi’s are by no means stupid people. They are determined to preserve their cultural identity, their language, and religion, and, therefore, keep a very strong and tight control on their national borders. For these reasons, they are especially vigilant about who comes into their country, and extremely reluctant to grant anyone not born in the Kingdom the rights and privileges of Saudi citizenship. Good on them, and good luck to them. This stance extended to the Kingdom’s response to the Syrian refugee crisis, which was to look the other way and not offer to take a single “refugee” – not one, zip, nada! On the whole, the Saudi response was to hold up a metaphorical sign saying – ‘Germany and Sweden – this way.’

Such is the suicidal impulse of the West, however; so captive are we to the forces of political correctness and the failed program of multiculturalism inflicted on us without vote or permission; so servile are we to the United Nations and its socialist agenda… We could not, and will not, put in place anything resembling the perfectly legitimate immigration policies of the Kingdom of Saudi Arabia. Tragically, nor will we preserve our cultural identity, our language, and our religion.