The XYZ Quote of the Day for Monday, November 16 goes to Voltaire for comments made a very long time ago regarding the Koran: 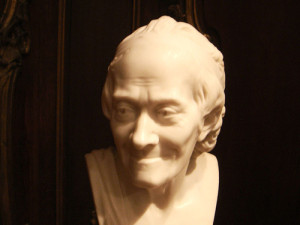 “The Koran teaches fear, hatred, contempt for others, murder as a legitimate means for the dissemination and preservation of this satanic doctrine, it talks ill of women, classifies people into classes, calls for blood and ever more blood. Yet, that a camel trader sparks uproar in his tribe, that he wants to make his fellow citizens believe that he talked to the archangel Gabriel; that he boasted about being taken up into heaven and receiving a part of that indigestible book there, which can shake common sense on every page, that to gain respect for this work, he covers his country with fire and iron, that he strangles fathers, drags away daughters, that he leaves the beaten a free choice between death and his faith: now this is certainly something that no-one can excuse, unless he came as a Turk into the world, unless superstition has stifled any natural light of reason in him.”

Photo by System One Gang