A view which is common across the political spectrum in the West, and common to people across the globe, is that the Middle East cannot, or should not, be democratic; that attempts by the West to impose democracy by force, or to encourage it through other means have been a disaster; and that the democratic forces which have mobilised via the Arab Spring have led to chaos.

This view is based on three main arguments: 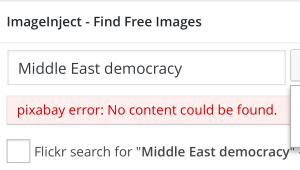 There are strong arguments for and against these points of view, and I will discuss them, and a solution to the conundrum, in part 2, which will be released later this week. What I want to highlight in this article is the contradiction in policy, and some of the hypocrisy in thinking, which surrounds this issue.

You cannot hold to the idea that the vast majority of Muslims are peaceful, tolerant, and want to enjoy the fruits of democracy in the West, but oppose the imposition of democracy in the Middle East, by force if necessary, because what if democracy is not the best way to run a country, and who are we to impose Western values…

You cannot support the idea of a dictator, (who has murdered Western citizens by downing civilian airliners, invaded its neighbours and blackmailed Europe economically,) helping another dictator, (who has used WMD to murder his own citizens,) to bring “stability” to a country riven by ethnic and political rivalries, and then argue for the people of that country to be allowed into the West and expect them to thrive democratically.

Anyone who believes that this will stop the massive flow of migrants from the Middle East into the West, quickly approaching a million annually, has rocks in their head.

Both morally and strategically, we are at one of the lowest ebbs in modern Western history. We have reached this point because we have given up on the belief that we have the right to intervene to secure Western interests, let alone defend democracy, and that such action will be successful. This belief is 100% wrong, and I will tackle it in part 2 of this article.