What a stunning performance by American sage Paul (“you gotta listen to your ecologists”) Ehrlich on Australia’s Q&A political chat show tonight.

Mr Ehrlich was given free reign on Q&A on the taxpayer funded ABC to impart his wisdom. Best known for his 1968 work ‘The Population bomb’ which (wrongly) posited that global population growth was unsustainable and that the world’s food and water resources would soon run out, causing famine and death on an apocalyptic scale. In short, we should all be dead by now, or starving in a desert somewhere. Of course, like most other apocalyptic world ending theories resulting in mass death (eg. the millennium bug, bird flu, sars, climate change etc ) it was total crap. It scared the hell out of school children in the 1970’s and 1980’s in the same way as the original ‘Terminator’ film, the only difference being the plot of Terminator was more convincing.

Among the gems Ehrlich offered tonight in 2015 was the assertion, made twice, that the island nation of Australia was definitely over populated, and, by the way, the Aussies continued mining of coal would cause mass starvation and famine and… yeah, you got it, that one again Mr Ehrlich, just like you said in 1968 right?

Yet, according to Paul Ehrlich Australia is over populated. That alone should cause any person not diagnosed with a mental illness requiring medication or involuntary committal in the psych ward to immediately disregard Ehrlich as a fantasist. Sadly, such are the standards of Q&A and the ABC (Australian Broadcasting Commission) in general, being so completely unable to distinguish activism from journalism, that this sort of delusion is pretty standard these days, and the odd failed prophecy (even if it is your whole life’s work) does not disqualify you from lecturing the nation on the matter at hand – if the “cause” is right (i.e. a Green Left one) that is.

So an “expert” who predicted global famine and mass death in 1968 that never eventuated is presented as an oracle and allowed to perpetuate theories that were disproved decades ago. Yawn. Australia has nothing to worry about. The nation is not over populated. And we can do without American “experts” lecturing us on this, or on our exports too, thank you very much. So, Mr Ehrlich, slap on the sandwich board, and take your “end is nigh” nihilism somewhere else. 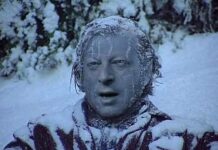