Get this for a quote:

“The Palestinian national identity isn’t the roadblock to peace in the region. Instead, it’s the fact that Palestinians are denied their basic right to exist in peace, freedom and equality on their ancestral homeland”, writes Samah Sabawi, and adviser to Al-Shabaka: the Palestinian Policy Network.

I suspect Ms Sabawi picked up this statement from elsewhere, and just happened to swap the word ‘Jewish’ for ‘Palestinian’.

The rest of her article, Denial of Palestinian rights is the real roadblock to peace published on the ABC’s ‘Drum’ continues in the same vein.

Sabawi, desperate to find some anecdote of history to stake a Palestinian claim asserts that “distinct Palestinian nationalism began in 1834 well before the be 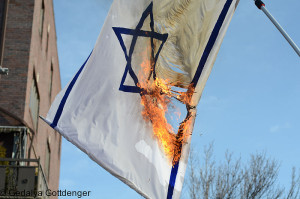 ginning of the Zionist project in Palestine, in what became historically known as the Preasant’s Revolt against Egyptian tax polices and forced conscription.”

She goes on, seeking to downplay the Jewish claim on live on the land by stating it “is derived from religious connections, stories from the Hebrew Bible… as well as recent habitation of the land. The Palestinian claim is far more concrete; it is based on the Palestinian people’s continuous habitation and uninterrupted contact with their land.”

In one fell swoop, Sabwai glosses over centuries of persecution and Jewish dispossession of their homeland.

Sabwai conveniently ignores the fact that Palestinian people are allowed to live in Israel in peace, the only truly democratic nation in the Middle East, where the rights of women, homosexuals and minority groups are protected. Palestinians are allow to serve in Israel’s military, its legislatures and in its courts. Of course, the same rights are not afforded to Jewish people in Arab/Muslim nations.

This issue really comes down to the right of Israel to exist, and Jewish people to actual live. The first ‘two state solution’ – the partitioning and independence of Transjordan in 1946 has not resulted in peace, nor will any other two state solution involving another independent Palestinian state. Even after Israel handed Gaza over to Palestinian leadership in 2005, their thank you gift has been the firing of a steady stream of rockets into Israel. To seal the Palestinian gesture of goodwill towards Israel, the people voted in the terrorist organisation Hamas, a group which sworn objective is to drive Israel into the sea.

These facts are continually ignored by those who purport that Palestinians are the victims, and deny Israel’s right to live in peace, or even to exist.

There will be no peace until Israel’s right to existence is recognised. There are scores of Arab/Muslim nations, yet there is only one Jewish nation, and that one is under constant threat and military attack.

Until Israel’s neighbours, Islamists and so called ‘progressives’ recognise Israel’s right to exist, there will be no peace. And that is where the rubber hits the road.