The XYZ has had an exclusive interview with an ageing hippie, who says that the antics of unemployed professional students in recent times has caused him to reflect on how little he really knew about the world when he was in his early 20’s: 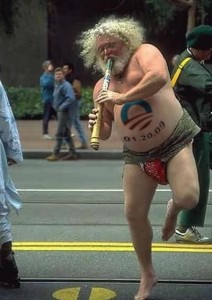 “I used to think the 60’s were an amazing time. I was just out of highschool, and revolution was in the air. We thought we were going to tear the old society down and build up a new one in its place. But I was an idiot. I didn’t know how the world worked. I used to lecture my parents, my friends, anyone who at least looked like they were listening, about how to solve all the world’s problems, but looking back at how I was, really, I knew nothing.”

He went on to say that a he has changed his mind on a lot of things, and looks back mostly in regret:

“I look at the kids going around these days with their ipods, ipads and the internet, and to be honest, I would have loved to have something like that when I was a kid. We all thought the Soviet Union was going to produce marvels like this, but it was the USA after all which turned out to be the on the money.

“And it worked out for me and my friends, too. We never moved far from university, so we all bought in the cheap inner city suburbs, which, since they have become trendy, has made us an absolute killing. When it comes to property appreciation, I have no complaints at all.”

He expressed his concern that today’s university crowd are becoming overly sensitive:

“We used to live by the idea that we had to shock the bejesus out of the establishment. That’s why we put on musicals such as Hair and Jesus Christ Superstar, we made television like Carry On and Monty Python. Now, the Village People are problematic because one of them dresses like an American Indian. It is absurd how touchy they are. Things which used to be on the cutting edge of progressivism are now seen as reactionary. It is reminiscent of the purges we used to see in the USSR and PRC, although even those we would never have admitted existed at the time.”

Finally, he said what filled him with most sadness was the way he and his ilk had smashed the old social mores:

“I don’t think we ever fully comprehended the implications of taking down the old social institutions and morals which we felt at the time were restrictive and archaic, but we have found since to have served a purpose – they existed for hundreds if not thousands of years because they served a purpose. Nor did it occur to us that the few children we did have would turn out to be as rebellious and lacking in respect to us as we were to our parents’ generation. Our parents’ generation saved the world from Nazism but we told them to shove it, but now we are experiencing the same dismissal towards the achievements of the social and sexual revolutions.”

To be honest, we never really meant what we said about wanting to destroy the institution of marriage. Even those who really did, have changed their minds about it. We all need someone to grow old with, and children to look after us in our final years. And grandchildren. We really would love some grandchildren.”

At this, the old hippie started to cry.