Futurism in science fiction is what makes the genre both exciting and relevant, as it provides parables for how life could be organised here on Earth, and inspiration for where we could aim to go and be in the future.  It also plays its part in setting the political agenda and directing cultural currents.  But a trope has well and truly developed in Hollywood science fiction about humanity’s future colonisation of space; we will do it because our planet is dying, and we will need to find a new home.

The movie Interstellar explores exactly this theme, as does the newest instalment of the computer game Syd Meyer’s Civilisation. Will Smith starred with his son a few years ago in the movie Earth, where humanity had long ago left an uninhabitable Earth for new homes in the Galaxy. Matt Damon starred in Elyssium, which combined catastrophic fears of climate change with a twisted take on The Time Machine, where humanity’s rich lived in paradise on a space station orbiting Earth, and its poor were marooned on the desolate surface.

Misanthropy, deep-green ideology, and bald-faced socialism are infecting the genre. Avatar was literally dripping in unironic Gaia worship and misanthropic environmentalism, and don’t even get started on “horrible socialist movie” Tomorrowland.

If these visions represent the deepest dystopic fears of the left, it is easy to imagine how the right could go to the same lengths:

Imagine a movie where the last remaining humans of talent are fleeing an Earth that has been impoverished by over-regulation and over-taxation, and is beset by an oppressive one-world government. These industrialists, innovators and creators strike out for new land in the same way that they did in when colonising America, with the hope that they can make their own lives and their own fortunes somewhere where nobody will tell them what to do. If Elysium was a space sci-fi version of The Time Machine, this is a space sci-fi version of Atlas Shrugged.

(I would pay good money to see that movie.)

Another flight of fancy could follow the train of thought, “What if Israel were to move to a different geographical location?”

In the hope that it will solve their problems once and for all, the Israeli government buys land in either Argentina, Mongolia, or Canada, triple the size of its current territory, and moves the entire country over there. The so-called Palestinians are given their own state, Israel sets up where nobody can bother them, and everything is going to be fine. Israel’s economy booms, they make incredible contributions to the world in the realm of science, culture and ecology, and anti-Israeli sentiment around the world gradually subsides.

But it is not a case of happily ever after. The Middle East continues to smoulder, especially as its States no longer have the common enemy of Israel to unite them and distract their people from their own failings. The infrastructure that had existed in Israel, and was generously left intact, quickly crumbles, as so called Palestinians engage in relentless civil war. Old resentments of Jews resurface and redouble. As the Arab people continue to wallow in extreme poverty, endless sectarian conflict between Sunni and Shia, and they even start running out of oil, the conspiracy theory that Jews are still pulling all the strings of the world’s power can only grow.

The disgruntled from all over the world start setting up camp on the borders of the new Israel, simultaneously demanding to be let in and hurling rockets into their desired homeland. Israel takes steps to defend itself and faces inevitable international condemnation as mass civilian casualties are caused by an opponent determined to use them as human shields.

Threatened by both a nuclear Iran and a nuclear Saudi Arabia, the Jews decide to pack up and leave, this time for outer space, on one of the moons of Jupiter. Here they thrive for a century or two, until the rest of humanity catches up with them. In the early 2200’s they are assailed by an interplanetary environmental movement who demand compensation for their degradation of Io, and face a new threat of spacefaring Arab States who harness the asteroid belt to hurl new projectiles at the Israeli colony, threatening its existence once again.

Basically, just follow the formula of most sci-fi movies these days, where you take all your political assumptions to create a choose your own adventure version of Star Wars.

This genre can’t be discussed fairly without mentioning the fundamental importance of the original Star Wars Trilogy.  They represent an era when Western Civilisation possessed immense cultural confidence, and were essentially the story of the United State’s battle for survival and independence.  It mirrored the monumental historical and political struggles of the time, and its language and ideas were deliberately co-opted by the Reagan administration to beat Communist USSR.

Both scenarios I have presented could be fun commentaries on modern history and interesting parables on what the consequences could be if political problems are left unresolved. But they both fail in one key area. If we believe so strongly that our principles of Classical Liberalism are correct, we should not be giving up so easily on them. Our grandparents and great-grandparents defeated the Nazis. Our parent’s generation toppled the Soviet Union. They did not make such sacrifices for us just so we could take our bat and ball and leave when we were confronted by a bizarre alliance of Socialists and Islamists.

My prediction of the future is that we will beat those sons of bitches. A strong core of the civilised world remains committed to free speech, free association, free markets, life, liberty and the pursuit of happiness. Indeed they are natural instincts shared by the entire human race, and they are stirred into action whenever threatened by totalitarian ideologies. We will use technology and ingenuity to overcome whatever slight environmental concerns we may encounter. Humanity’s direction will progress inevitably into our solar system and outer space, where we will compete to harness the stupendous resources available out there to take us beyond our wildest dreams.

I think there are plenty of excellent movies, books, and video games to be made exploring this future, and good money to boot.

All the while, the Earth will carry on just fine. 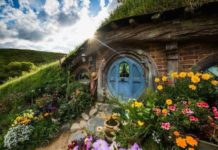