University communists such as the Socialist Alternative and their sponsored groups such as the Campaign Against Racism and Fascism, have claimed to be a force in support of minorities. Such groups have resorted to violence and degenerate behaviour as a means of achieving this goal, which to the shame of our society today, has been ignored by our mainstream media outlets.

In this passage, I will discuss why, as a minority myself, the Socialist Alternative and others do not represent my interests, by pointing out their disregard for minorities and blatant hypocrisy on the topic of violence.

On multiple occasions, the Socialist Alternative and allied organisations such as the Disarm Campaign have expressed praise for communist regimes, despite their false claim of being opposed to Stalinism. One of these regimes is the regime of the Vietnamese government and its immediate predecessor, North Vietnam. During the course of one of their brainwashing and indoctrination camps (uh I am sorry conference), Socialism Sydney, one of the presentations proclaimed that Vietnamese welcomed the hordes of invaders.

This, of course, is a blatant lie. Prior to the arrival of the invaders, millions of Vietnamese military personnel, police officers and civilians gave their lives in defence of South Vietnam, two of whom were my family members, one a respected soldier in the Army of the Republic of Vietnam, and another being a civilian government official. Millions more evacuated Vietnam in the aftermath of the invasion.

There was no welcome, far from it.

Such praise was repeated in material distributed by the Disarm Campaign which showed an image of protestors waving North Vietnamese flags. Such imagery, in conjunction with the above speech, demonstrates their blatant disregard for minorities victimised by the use of such symbols.

Now on to their blatant hypocrisy. Organisations such as the Socialist Alternative, the Campaign Against Racism and Fascism, Disarm Campaign, the Greens and others proclaim their pacifist motivations to the media, and their desire to reduce military influence on society. When one looks upon the actions of these groups however, an extremely different image is presented.

Riots, bitter insults such as “Nazi,” and intimidation all characterise the actions of the Socialist Alternative. I myself have witnessed disruptive protests at a graduation, clearly disturbing the graduating cohort, visiting parents and dignitaries, causing the university administration to contact the police. Similarly, I also witnessed a particularly disruptive demonstration in a mall where attendees had the gall to chant “Fuck Scott Morrison” for an extended period of time despite the presence of young primary school aged children, accompanied with their parents who appeared to be shocked by the events. I did not hesitate to contact the police who had a presence throughout the remainder of the demonstration.

Interrupting the highlight of many students’ academic careers and alienating visitors is a new low, even for SAlt.

Now where does this leave us? These events, amongst many others such as the harassment of right wing commentators and their supporters, the mistreatment of elderly supporters of Milo Yiannopoulos, their rabid desire to desecrate the flag which our ANZACs fought under and their will to destroy the concept of private property, brings to us a need for action.

As conservatives, we must be aware that the media is not our friend. We must also be aware that the Socialist Alternative and others have significant followings of impressionable people, driven by a misplaced sense of rebellion. However, it must also be known that we cannot lose hope. There are numerous ways which we can oppose the virulent strain of communism on campus. Whether it is by writing articles on platforms like XYZ, postering your local area or by creating counter rallies, we should all take actions against the rise of radical socialism and communism in modern society no matter how trivial. 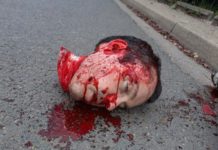