A flashmob style protest was successfully pulled off yesterday at Chadstone Shopping Centre against the oppressive lockdown in Victoria. Here is how Channel 9 tried to frame it:

As @Eliza_Rugg9 reports, organisers are claiming the stunt as a victory, because of the huge financial cost to police. #9News pic.twitter.com/ViU4OGYqhN

They followed up this morning with fake humour and fake laughter:

John Farnham is furious at Melbourne anti-lockdown protestors after they used his classic anthem to promote their message. #9News pic.twitter.com/yblFJ8Zd5C

But what really happened here?

A bunch of Aussie patriots used an encrypted messaging service to organise a rally. They brandished the Red Ensign, sang an iconic song which captures the nostalgia of what Australia used to be, then most of them successfully escaped before the KGB arrived, with only 2 arrested and 6 fined.

Regarding the non-event at the Footscray Market, perhaps they had intel that the riot squad had been alerted and were there, waiting. Perhaps they figured they had already fulfilled their mission‘s goals and called a halt to operations. Perhaps it was a deliberate diversion.

Some thought regarding tactics and optics has clearly gone into this. Going to the supermarket is one of the few things you’re allowed to do in The Current Year in Soviet Melbourne. Protesters can mass at a supermarket without arousing suspicion, protest flashmob style, make their point, then disperse before the system’s drones arrive.

The optics are great. You either get absurd footage of the riot squad advancing down the banana aisle: 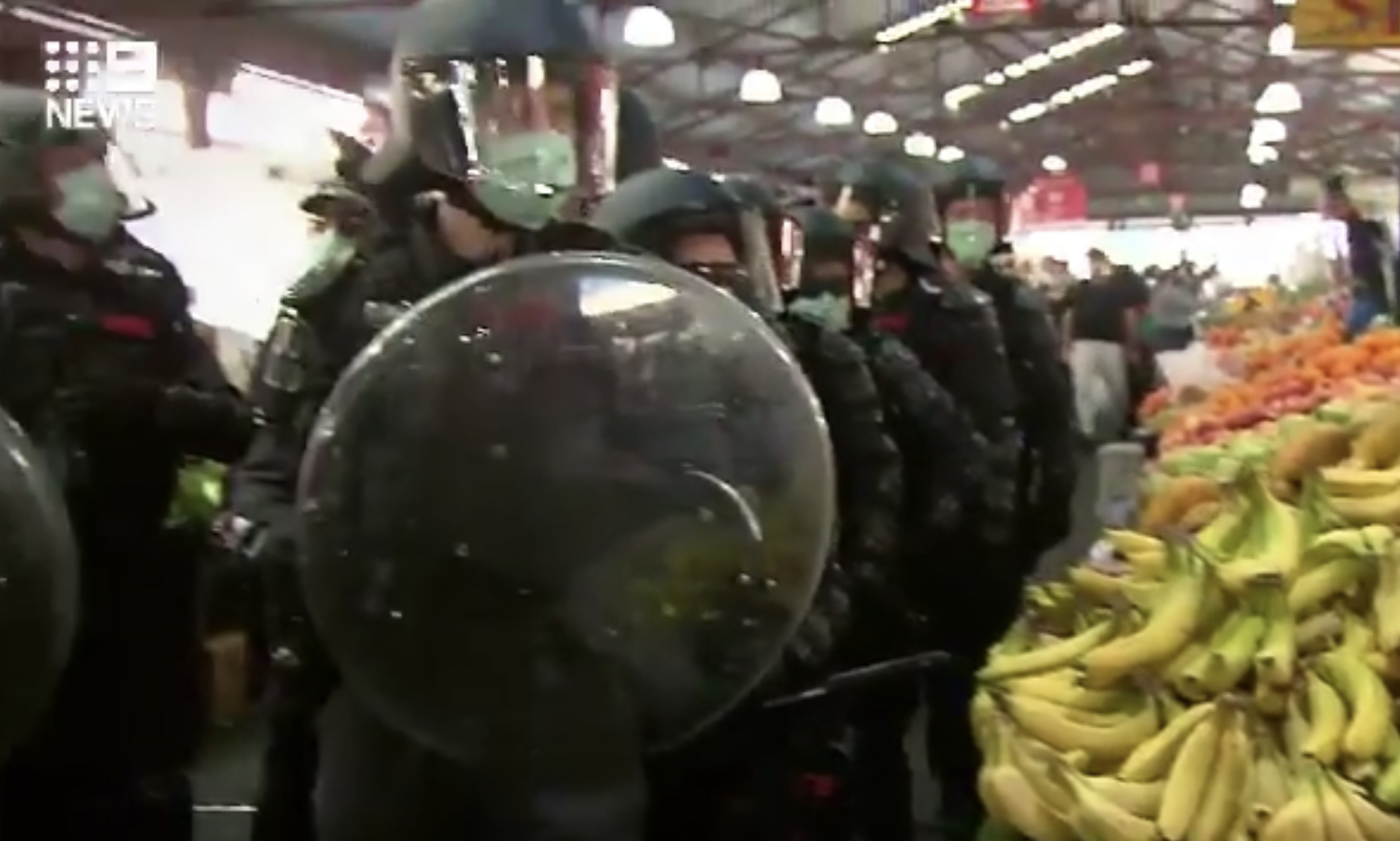 Or humiliated Stasi attempting to appear intimidating to random shoppers: Last week it was the Vic Market, yesterday Chadstone. Next week, I have no idea? Old Dick Ears Dan is complaining that the protesters are wasting police resources, and he is spot on. It’s brilliant. They can’t keep tabs on every supermarket in Melbourne. They could divide their forces so they can respond quickly to protests in disparate locations across Melbourne, and they can try to infiltrate the groups and their encrypted chats, but that’s a headache.

Maybe the protesters will take next weekend off and make the authorities waste resources for nothing. Maybe they’ll pivot to a different type of location to keep authorities guessing. Maybe there will be multiple protests all across Melbourne.

Thought has also gone into the overarching strategy. Mark Moncrieff points out that in a war against a stronger opponent the result of each battle matters less than the overall strategy of reducing your enemy’s ability and will to fight.

Dictator Dan and his thugs can continue to arrest grandma to save grandma, drag women out of their car, they can arrest and harass pregnant women, they can smash people’s doors down, but if people continue to organise and continue to find creative ways to protest in public, the authoritarian state could be worn down.

A similar process appears underway in England. At a rally in Trafalgar Square police used a small group of officers to distract a crowd so their main force could charge from behind.

They come marching over from behind, kettle the crowd and then they start the arrests and dispersal of the crowd.

It is thus stirring to see our brothers hold their ground and form the modern day eqivalent of a shield wall.

So we now have people working in formation. This is encouraging. https://t.co/WmWZ9slvbt

There is still strength in our blood.