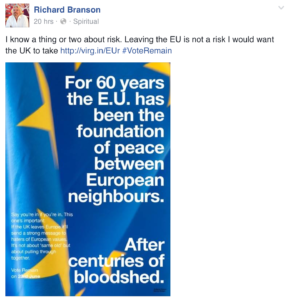 My respect for Richard Branson is becoming slimmer by the day. What he has posted here is complete scare-mongering.

The bloodshed in Europe in recent years has been from Islamic invaders, and not from European neighbours.

The EU takes away national identity and pride, slamming those who want to stand out, and taking control of over nations, via a socialist regime, by unelected officials.

What Mr Branson has said here is that the individual governments and peoples are incapable of living peacefully side by side. Is he referring to the two world wars? Or the constant conflict that has plagued Europe pre 1900? Either way he has no regard for peaceful living people.

What about, for example, European countries out of the EU, like Switzerland and Norway? Are they living in a violent, backwards world? Short answer is no. Hell, they even have better trade deals than those in the EU.

Branson. You are not taking a risk. You are playing a safe bet to appease the politically correct, socialist left brigade.

The EU isn’t the founder of peace between nations. Common sense has been. (Also the threat of someone pissing off America before they became a whipped dog). I also believe that after so much violence, no European wants conflict on their soil again, regardless of the existence of the EU.