The Liberal Party still may be, nominally, the party of free enterprise and entrepreneurship, although when it constantly competes with Labor to see who can splash the most money at social programs, one is given pause to ponder.  The Liberal Democrats, represented by the stirling David Leyonhjelm in the Federal Senate, has free market credentials which are second to none.  The Australian Liberty Alliance too, professes a commitment to free markets and less regulations, despite the unfair stereotype of their being a single-issue party. 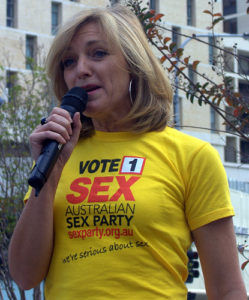 To this proud mix, add the Sex Party.  (I voted for them once, when the Libs didn’t field a candidate in my seat, and they were the only party on the role who mentioned the freedom to trade in anything approaching a positive manner.) Although their representatives may not exactly leave you feeling like, well… you know… (Nor may they be your cup of tea,) but they have an admirable cultural libertarian.. bent.  Today, in the Victorian Parliament, the Sex Party’s Fiona Patten introduced a… private member’s bill to regulate, and thus legalise, the ride-share service, Uber, which has been in a legal no-man’s-land for the last few years.

It will still take a few months to push through the parliament, because, you know, the State, but with the possibility of even deregulating the taxi industry, the future is looking bright for free enterprise.  Who knows, maybe there are other areas of our lives where we can avoid having to deal with the government, and just organise things ourselves.

So to Fiona Patten, the Sex Party, and Uber, we award The XYZ Quote of the Day.