Ben Shapiro, from Truth Revolt, cuts through the argument that it is only a tiny minority within Islam who holds extremist views. He made this video in October 2014, in response to the televised spat On October 3, 2014, between Ben Affleck, who angrily asserted that the vast majority of Muslims were peaceful, and Bill Maher and Sam Harris, who argued that liberals needed to stand up for liberal values when debating Islam.

Here, Ben Shapiro presents statistics which suggest that a strong proportion of Muslims around the world do not hold to moderate or liberal principles, but many actually have ‘positive feelings’ toward terrorist organisations, believe in the implementation of sharia law not only in their own country but around the world, and feel that honour killings are justified some of the time. 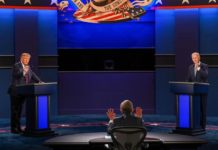