What has always annoyed me is that we are by far the most colour diverse race on the planet, yet the reasons for this are largely ignored or found embarrassing by anthropologists, geneticists and wider academia. It surely is one of the most remarkable products of evolution that a tiny corner of our planet developed such wide ranging phenotypes. Perhaps what’s even more startling is how recent such traits became widespread in Britain, with the Bronze Age now seen as the time when our current looks became ‘mainstream’. It must be pointed out that blonde and red hair are also observed among some non-Whites, for example Melanesians, yet there it evolved separately from Europeans.

Lighter features almost certainly developed in what is now Siberia, and gradually spread west over thousands of years. Indeed, the earliest known site where the alleles responsible for blonde hair have been recovered are near Krasnoyarsk, a Russian city 750 miles north of the Russo-Mongolian border. Eastern Hunter Gatherers, who were almost certainly the first Europeans with a lighter phenotype, and who descended from the remains found near Krasnoyarsk, were already in north-east Europe 9000 years ago.

One of the most startling traits of Europeans, at least in my opinion, is the combination of red hair, blue eyes and freckles. It is by far the rarest phenotype in the world, and was associated with the Celts for many hundreds of years. Yet perhaps counter-intuitively, these traits are actually most common among the Udmurts who reside in Russia. It’s quite bizarre that the most common places for red hair are Ireland and a province which lies to the east of Moscow. They both have the same mutation for red hair – located on the MC1R gene – yet are both situated on the opposite sides of Europe. If there was any evidence that all White people have a common origin, then this is most definitely it.

Among northern Europeans it is the lighter features that primarily won out in the evolutionary struggle. There are some who have (slightly) darker appearances in the north, for example like Swedish actress Alicia Vikander, yet this isn’t a non-European trait as some people seem to think. Even among the Eastern Hunter Gatherers, where as I say lighter features were in abundance, some had alleles which produced an olive skin tone.

And then there are our noses. It’s taboo of course to talk about physical differences among humans, especially facial features, yet this is actually a very important part of our evolution. It’s not widely taught these days, but Thomson’s Nose Rule from the 19th century is still a good method of indicating where a people originated. Arthur Thomson (1858-1935), a British anthropologist, noticed that people in colder climates tend to have longer and narrower nose bridges then those in hot climates. This allows oxygen to warm slightly before it reaches the brain and lungs, and so is quite good if you’re battling to survive in the winds of winter.

Before WW2, it was quite common for skulls, noses, and everything else to be measured along ethnic lines, though today such practices are likely to get you permanently banned from academia. However, on average, Europeans do have nose bridges adapted to cooler climates, something which contributes to the general look for which we are known the world over. It’s probably something we take for granted, as it’s easy to forget the majority of the world’s population actually have flatter and wider noses which are beneficial in warmer conditions.

Another of the most fascinating (and true) realities of Europeans is that females have much more colour differentiation then males. They’re more likely to be blonde or redheaded, more likely to have blue eyes, and more likely to have freckles. And indeed, European males with a softer face shape are more likely to have lighter features than males with a squarer jaw. And remarkably blonde hair darkens in males quicker than females, even among twins who are of the opposite sex, and males with a softer face retain their blonde hair for longer. The reasons for this are still unknown, but the study hints at sex selection over thousands of years. The paper linked in this paragraph came out in 2014 just before ‘the great awokening’, and it’s unlikely similar studies will be done anytime soon.

For those of us who reside north of Rome and west of the Urals – and those around the world whose ancestors set off along ago from this area – we have a remarkable genetic lineage and history that deserves to be investigated properly. All humans are the result of evolution and selection pressures which at times verged on the extreme, and we today are the result of their determination to reproduce despite the odds being stacked against them. It is remarkable that on a planet primarily composed of humans with darker features of varying shades, there was a corner of the world that produced the complete opposite complexion. A physical appearance that has inspired and captured the imagination of all those who have witnessed it. 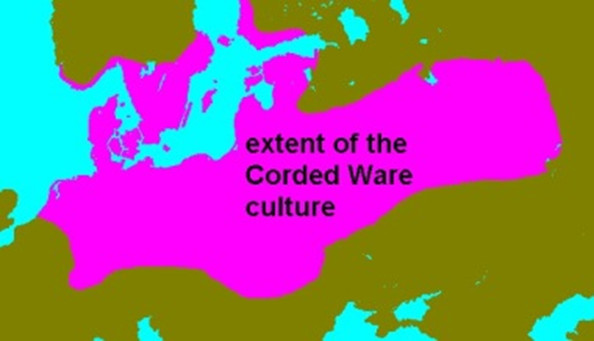 The big question then is who were the first White people? Was it the individuals who first carried the alleles for blonde hair deep in Siberia? Well probably not, because the frequency of it was so low that blonde hair was probably never expressed, or at least not a lot. So then was it the Eastern Hunter Gatherers with their lighter features? Well possibly, but they lacked the Anatolian Farmer and Steppe Ancestry that would come to define modern northern European populations. In honesty, although it’s not politically correct to say, the most likely suspect is the Corded Ware Culture of the Copper and early Bronze Age. From there all Celts, Slavs, Germanics and many more groups descend. They are thought to be the first to carry the modern admixture that we have, so they’re probably the best candidate.

Nationalism is of course a political ideology, but it is nonetheless an ideology based essentially on a group’s own biological interest. Understanding the history of ourselves from an evolutionary perspective was pretty difficult up until the advent of Ancient DNA studies, with the first accurate papers being released as late as 2015 in regards to European lineages. For every liberal argument about immigration in the past, there is a reactionary counter argument of invasion and conquest. The latter is more accurate – our ancestors were quite brutal and innovative, they needed to be to survive – and it’s that version that should be taught to the next generation.